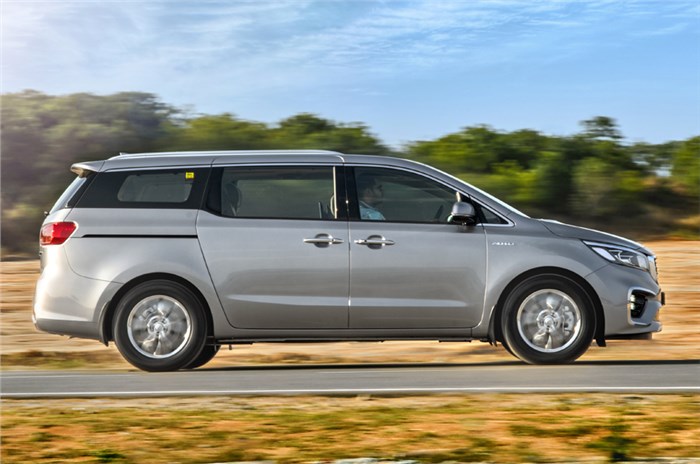 There isn’t much that’s left to be revealed about the Kia Carnival MPV, but we now have one of the most looked for information – its fuel efficiency. The Kia Carnival’s ARAI-certified mileage is 13.9kpl.

This figure, in part, is due to the 2.2-litre, four-cylinder turbo-diesel engine – which produces 200hp and 440Nm of peak torque – paired with an 8-speed torque convertor automatic gearbox. In addition, the Kia Carnival isn’t particularly lightweight, with a over two-tonne figure that also affects its mileage.

The Carnival’s closest competitor in the MPV space – the Toyota Innova Crysta – now comes with a BS6-compliant 150hp, 2.4-litre diesel engine. While Toyota has yet to reveal ARAI figures for the BS6 version, the BS4-spec Innova 2.4-litre diesel-manual was rated at 15.1kpl, while the 2.8-litre diesel-automatic (which didn’t receive upgrades to meet BS6 norms) had an ARAI-rated 14.29kpl. Considering fuel efficiency figures tend to drop with the upgrade from BS4 to BS6, the Carnival’s 13.9kpl isn’t all that low.

When Kia Carnival prices are officially revealed at the 2020 Auto Expo, we’ll know if the extensive list of features and its near-Mercedes V-class size are worth the cost. In the meanwhile, read our review of the Kia Carnival MPV here.