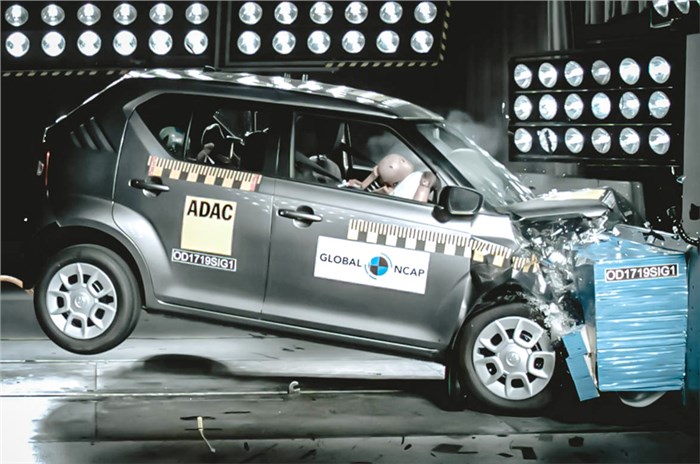 As part of its Safer Cars for Africa campaign, Global NCAP has published the crash test results for the Suzuki Ignis, which is made at Maruti Suzuki’s plant in Gurugram and exported to Africa, and the results make for a mixed read: the Suzuki Ignis’ safety rating from Global NCAP is pegged at three stars.

Having subjected the Ignis to a front offset crash at a speed of 64kph, Global NCAP noted that while protection offered to the co-driver ranged from adequate to good, protection for the driver’s chest was rated ‘weak’. Protection for the driver’s knees was rated ‘marginal’ as they could be badly damaged by what Global NCAP describes as a “dangerous area behind the fascia supported by the transfascia tube”.

Additionally, the Ignis' bodyshell was rated as unstable and incapable of withstanding further loadings. It’s worth noting at this point that the Suzuki Ignis sold in Africa is identical to the Maruti Suzuki Ignis on sale in India in terms of safety equipment, barring the India-spec model getting a seatbelt reminder for the co-driver as well – the Africa-spec model only has it for the driver, and consequently, does not meet Global NCAP’s requirements. Interestingly, the Suzuki Ignis tested by Euro NCAP in 2016 also secured a three-star rating. That model was equipped with six airbags and also featured electronic stability control, and was subjected to Euro NCAP’s more stringent set of crash tests.

Highlighting the poor one-star rating for child occupant protection, Global NCAP noted that Suzuki does not recommend a specific Child Restraint System (CRS), and the child seat Global NCAP used in the test was unable to sufficiently protect the chest area of the three-year-old child dummy. Global NCAP further noted there is no provision to disable the co-driver’s airbag in case a rear-facing child seat is installed in the co-driver’s seat.