Hyundai Venue: What we know so far

We tell you what to expect from Hyundai’s answer to the Mahindra XUV300, Maruti Suzuki Vitara Brezza and Tata Nexon, which is scheduled to launch in mid-May. 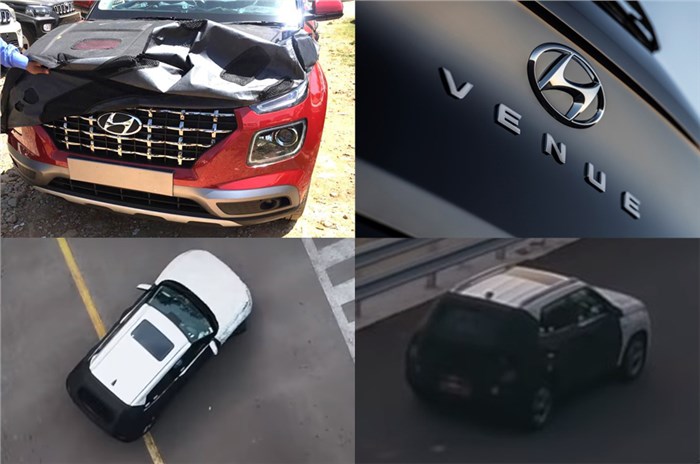 Hyundai has been creating waves with its upcoming compact SUV, the Venue, which has been teased, leaked and revealed partially via official illustrations. Sitting below the Hyundai Creta, the new Venue compact SUV will play a vital role in the Korean carmaker’s India line-up, and this has been underlined by the fact that it will be unveiled in India and at the New York International Auto Show on April 17, 2019. Also, the Venue in India will take on well-established compact SUV rivals like the Mahindra XUV300, Maruti Suzuki Vitara Brezza, Tata Nexon and Ford EcoSport.

In the run-up to the India launch, which is expected in mid-May, we tell you all that we know so far about the Hyundai QXi, now officially named the Venue:

In order to have a unique selling point in the compact SUV segment, Hyundai will equip the Venue with a raft of connectivity options. These segment-first features, which enhance safety and security, convenience via remote-controlled functions, voice recognition and comprise location-based services, should give the Hyundai an edge over rivals.

At the higher end of the compact SUV segment, models like the Mahindra XUV300 and Ford EcoSport are well kitted and have some segment-first features. Hyundai is expected to match them with features like ventilated front seats (a first in class), a large touchscreen infotainment (with Android Auto and Apple CarPlay), a sunroof, a climate control system and more. Safety kit on lower-spec Venue variants will include dual front airbags, ABS, seatbelt reminders and rear parking sensors across the range, while the top-spec is expected to add seven airbags and a reversing camera, among other tech.

It shares its design language with bigger Hyundai SUVs

Hyundai has the stylish Tata Nexon and the rugged Mahindra XUV300 to contend with here, and the Venue will be eye-catching in its own right. In silhouette, the Venue compact SUV looks like the larger Creta, and that isn't a bad thing. The nose sports a new version of Hyundai’s cascading grille that has a rectangular design instead of a honeycomb one, and it gets the dual-headlamp setup seen on larger Hyundai SUVs like the Kona. The top-spec Venue will also be fitted with diamond-cut alloy wheels and squarish LED tail-lights.

Another aspect where Hyundai will try and carve a niche for the Venue is in the drivetrain department. Like the Ford EcoSport, the Hyundai Venue will come with three engine-gearbox combinations – a 100hp, 1.4-litre petrol with a 6-speed manual, a 90hp, 1.4-litre diesel paired to a 6-speed manual and a 100hp/172Nm, 1.0-litre turbo-petrol that comes with a 7-speed dual-clutch automatic gearbox. While Ford did offer a dual-clutch automatic on the EcoSport earlier, it was replaced with a cost-effective 6-speed torque converter in the 2017 facelift.

In contrast, the Nexon and XUV300 also get turbo-petrol engine options – both have 110hp, 1.2-litre motors, though the former has a 6-speed AMT option, while the Mahindra will get a diesel-AMT combination later.

Its interior bits are borrowed from more premium Hyundai SUVs

Based on official design sketches released by Hyundai and leaked images, the Venue’s cabin has a fairly straightforward look and seems to be ergonomically sound. The infotainment display sits on top of the dashboard, the central console has chunky dials for the climate control system and the lower part provides storage. There’s also a recess above the glovebox that functions as an umbrella holder, cubbies in the doors and behind the gear lever for bottles and knick-knacks. The cabin will also get a wide centre armrest at the front and adjustable headrests for the seats. Expect the Venue to share its interior bits with the Hyundai Creta, including a dual-tone interior finish instead of an all-black one. A previous spy image also showed that space at the rear is generous.

Venue prices to be above the Maruti Suzuki Vitara Brezza

Taking into account the unique features and connectivity tech, the turbo-petrol with dual-clutch automatic combination and Hyundai usual pricing trend, expect the Venue to take on the Mahindra XUV300 and Ford EcoSport with a price of Rs 8-12 lakh (estimated, ex-showroom). The Tata Nexon and Maruti Suzuki Vitara Brezza sit in the lower end of compact SUV segment and will undercut the Venue. Hyundai Venue prices will be announced mid-May, which is when we’ll know for sure how well the model will do. Stay tuned for more information.