With just a couple of days to go for its unveil on April 17, the first pictures of the Hyundai Venue compact SUV have emerged online, confirming a number of design details. 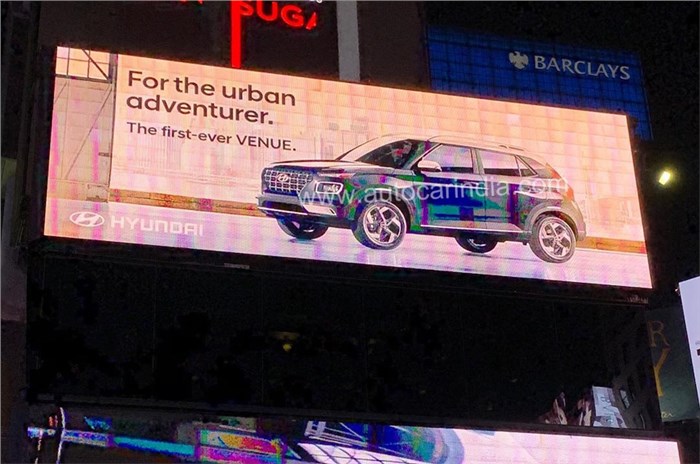 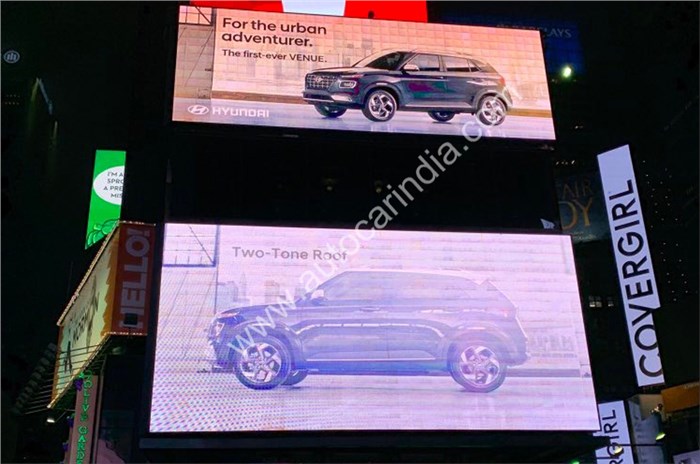 So, what’s new? Well, for the first time, we get to see the Hyundai Venue in all its glory. Design details were confirmed recently when Hyundai released official sketches, but now, we have a clearer look at the Venue’s chunky and squat stance. Yes, the production model doesn’t have the exaggerated wheel arches and oversized wheels of the model in the sketch, but it does feature Hyundai’s cascading grille embellished in chrome. The Venue’s dual-headlamp setup comprises slit-like lights on top and the main headlight unit is positioned lower, as has become the new trend with a lot of new SUVs. Squared-out DRLs surround the main headlights, and we can see what look like contrast tone inserts in the front bumper, which will also house the fog lamps.

What these images also confirm is that the Hyundai Venue will also get dual-tone paint scheme options, with the model in the picture getting a white roof, which appears to be ‘floating’ thanks to the blacked-out pillars. The dual-tone paint scheme is also a clever way of adding sportiness to the design, as the roof doesn’t taper towards the tail, but the edge of the contrast roof dips sharply towards the C-pillar. What we can also see are reflectors on the wheel arches, and the dual-tone diamond-cut alloy wheels we have seen in previous spy shots and promos.

Spy images and sketches have already revealed much of the Hyundai Venue’s interior. The dashboard is fairly straightforward in look, but the cabin promises to be a user-friendly space. The BlueLink infotainment system’s 8-inch touchscreen takes pride of place on the dashboard, and houses 33 connectivity features, 10 of which have been developed specifically for India.

The Venue will, in true Hyundai fashion, be loaded to the roof with features. A promo earlier confirmed the Venue compact SUV will have a sunroof, and you can also expect a large touchscreen infotainment system with Android Auto and Apple CarPlay and a long safety feature list on the top-spec variant. Hyundai could also choose to go down the Mahindra XUV300 path and equip the Venue with a number of segment-firsts such as ventilated front seats.

At launch, the Hyundai Venue compact SUV will come with a total of three engine options – a 1.0-litre, three-cylinder turbocharged petrol making 100hp and 172Nm; and the 1.4-litre, four-cylinder petrol and 1.4-litre, four-cylinder diesel borrowed from the Verna. While the petrols are likely to be closely matched on power, the turbo-petrol engine will offer a significant torque advantage. “SUVs need strong mid-range torque, and the turbo-petrol will give the compact SUV some punch”, a source close to Hyundai told Autocar India.

The big news is that while the 1.4-litre petrol and diesel engines will likely be offered with a 6-speed manual gearbox, the 1.0-litre turbo-petrol will be paired to a 7-speed dual-clutch automatic gearbox (likely with paddle shifters), which will make the Hyundai Venue the only compact SUV on sale with a dual-clutch auto ’box.

The Hyundai Venue compact SUV will be unveiled on April 17, 2019, and will be launched in India by mid-May 2019. Right from the time it enters the market, the Venue’s rivals - the Maruti Suzuki Vitara Brezza, Tata Nexon, Ford EcoSport and the Mahindra XUV300 – will give it stiff competition. The Hyundai Venue’s price is expected to range from Rs 8-12 lakh (ex-showroom).