CKD assembly of Ioniq 5 will result in significantly lower price than Kia EV6, but deliveries could be pushed to January 2023. 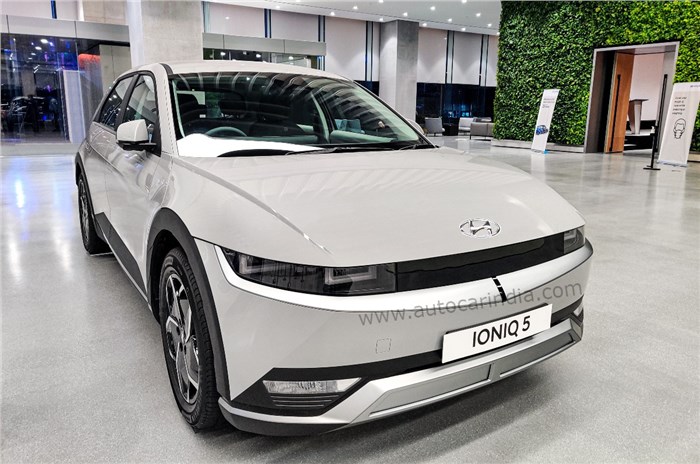 Hyundai and Kia are all set to the launch their respective flagship EVs within a few months of each other. Kia will come to the market first with the EV6, which is expected to go on sale sometime next month, whilst Hyundai will bring the Ioniq 5 a couple of months later. Kia hopes to get a first-mover advantage with the EV6, but due to the huge global demand for the company’s first ‘born electric’ EV, only 100 EV6s have been allocated for India.

Hyundai too had planned to take the quick-to-market import or CBU (completely-built-up) route, but we have now learned that Hyundai has changed plans and will instead assemble the Ioniq 5 in India in a bid to upstage its sister brand. The big customs duty difference between CBU and CKD (completely knocked down) kits is sure to create a big price gap between the EV6 and Ioniq 5.

EVs attract the same customs duty as ICE cars, which has been Tesla’s long-standing bone of contention with the Indian government. Imports attract a hefty 60 percent customs duty before other taxes, whilst cars that are semi-knocked down (SKD) or partially assembled attract just 30 percent, and completely knocked down (CKD) cars with the major aggregates imported not in a pre-assembled condition, attract just 15 percent. Sources in Hyundai say the company is planning to import CKD kits of the Ioniq 5 to comply with the lowest duty slab.

However, the setting up of a CKD assembly line, as well as huge supply constraints for the Ioniq 5 thanks to booming global demand have pushed the launch to end 2022 and deliveries to customers could stretch to January 2023.

Both the the EV6 and Ioniq 5 are large, born electric crossovers upwards of 4.5m in length and built on Hyundai’s e-GMP platform and hence it’s natural to draw comparisons between the two. They each serve as the electric flagship model for their respective brand, and both offer state-of-the-art battery and charging tech to rival the best in the world.

Overseas, although there are some differences in their powertrain specification and the variants on offer – the two cars are priced more or less on par with one another. In fact, brought in as CBU import, we had estimated both cars to cost in the vicinity of Rs 60 lakh (ex-showroom), but as a CKD, the price of the Hyundai will likely become significantly lower.

Internationally, the Ioniq 5 is available with a 58kWh battery with a single 169hp motor, or with a 72.6kWh battery pack with two motors that come in two states of tune – 217hp or 306hp. The carmaker recently introduced a larger 77.4kWh battery pack, which will go on sale later this year for global models.

For India, company sources say that Hyundai will launch the base version with a 58kWh battery and a single 169hp motor to widen the price gap even further. “We are targeting a sub Rs 50 lakh price” said a Hyundai source.