Hyundai Ioniq 5 confirmed for India; launch in second half of 2022

Hyundai is set to expand it EV line-up in India to six models by 2028. 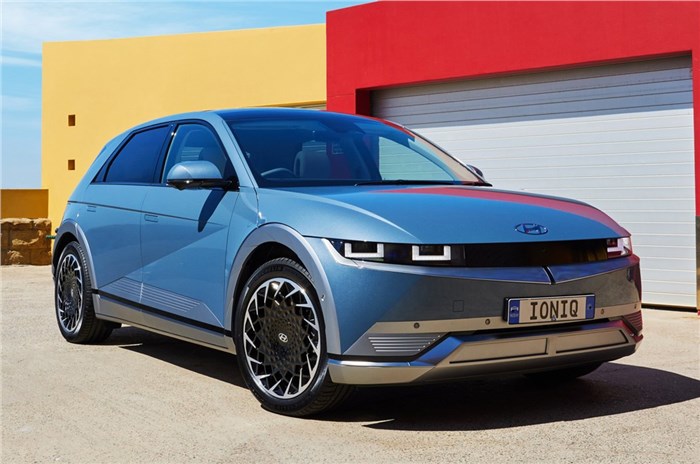 Hyundai has confirmed that it will be launching the all-electric Ioniq 5 in India, in the second half of 2022 under its Beyond Mobility strategy. The Korean carmaker has also committed to expand its battery electric vehicle range in India to six models by 2028.

This announcement comes hot on the heels of the Ioniq 5 winning the 2022 World Car of The Year award and also corroborates our previous report on the EV being brought to India as a full import in 2022.

The Ioniq 5 is based on Hyundai’s Skateboard platform called E-GMP (Electric Global Modular Platform) and is the carmaker’s first ground-up EV built around the battery and electric motors. One of the biggest talking points of the Ioniq 5 is its '80s-inspired design that blends the clean and minimalist lines, flat surfaces and SUV stance with some retro design elements to give it a unique look.

Abroad, Hyundai offers the Ioniq 5 with two powertrain options. The first is a single-motor layout that produces 169hp and 350Nm of torque, and drives the rear wheels. The higher trim gets a dual-motor, all-wheel-drive layout that produces a combined 325hp and 605Nm of peak torque.

In terms of battery packs, there are two configurations – a 77.4kWh that offers a maximum range of 502km (WLTP cycle) and a 58kWh that is good for 385km on a single charge. The EV features 800V battery technology that allows for the potential of ultra-rapid charging, where the Ioniq 5 can charge its batteries from 10 percent to 80 percent in just 18 minutes using a 220kW DC charger.

The Ioniq 5 isn’t going to be the only EV launch Hyundai has lined up for our market as the Kona Electric facelift is also set to be launched in 2022. The carmaker is developing a mass-market electric vehicle for India that is set to be introduced in 2024.

Besides this, Hyundai also has three other SUV launches lined up for 2022. These include the fourth-gen Tucson, Creta facelift and Venue facelift.

Once launched in our market, the Ioniq 5 will compete directly with its sibling from Kia – the EV6. Kia is set to launch the EV6 in August, but due to global production constraints, only 100 units will be allocated to India for this year.