All-new Tucson headed here, along with facelifts for Kona EV, Creta and the Venue. 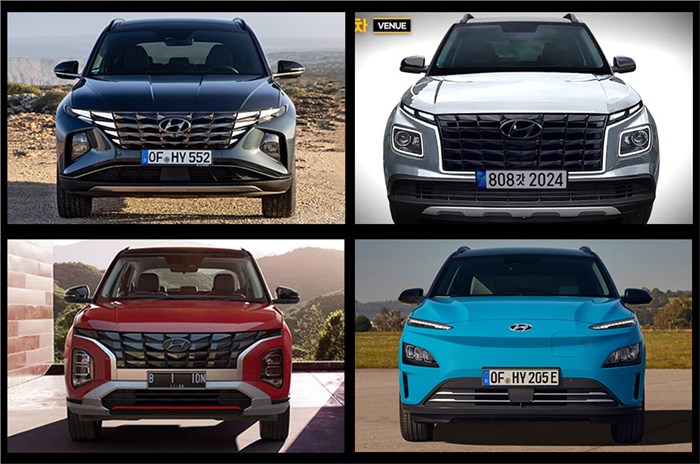 Hyundai is gearing up to revamp its SUV line-up in India over the course of 2022, with four new models – one all-new SUV and three facelifts – set to launch this year. We have gathered all the details of the upcoming SUVs below.

First up is the fourth generation of the Hyundai Tucson, which is set to launch in our market in the coming months. This new Tucson has received a major design overhaul, with the most eye-catching element being its ‘Parametric’ grille design – it seamlessly incorporates mirror-like LED daytime running lights that become visible only when switched on. Besides this, the rest of the SUV also sports a bold look that’s vastly different from its predecessor, with good proportions, well-defined character lines and muscular wheel arches.

The cabin, too, is a big departure from its predecessor, with an all-new design and layout. There is a layered dashboard, with a 10.25-inch touchscreen infotainment in the centre, accompanied by a 10.25-inch digital driver display and a touch-panel for the climate control system.

Hyundai’s smallest SUV offering in India, the Venue, has been around in our market since 2019, and given how most carmakers usually operate, it is now due for a facelift. The Venue facelift mules have already been spotted testing in South Korea and have revealed some of the change we can expect. Hyundai might launch the updated Venue towards the middle of 2022.

Exterior design is an area where the Venue is set to get a lot of changes. These will range from the restyled front-end with Hyundai’s parametric grille and new headlight, to the reprofiled front and rear bumpers, and new tail-lights with Ioniq 5 inspired LED graphics.

There are also some cosmetic tweaks that are expected to be made in the cabin, but for the most part, the design and features list will be similar to the current model. Even the powertrain options for the India-spec model will remain unchanged, with Hyundai carrying forward the 83hp, 1.2-litre naturally aspirated petrol engine, the 120hp, 1.0-litre turbo-petrol unit, and the 100hp, 1.5-litre diesel engine.

The Creta is Hyundai’s bestselling SUV in our market, and even though the second-gen model was launched only in 2020, the brand is keen on updating it to keep it relevant in the uber-competitive midsize SV segment.

Hyundai has already revealed the Creta facelift for Indonesia and the India-spec SUV will carry over most of those changes. The big changes for the Creta facelift will be the styling, which will have a refreshed front end with the new ‘Parametric’ grille design, updated headlights and a new front bumper. The tailgate and rear bumper styling will also be updated to make it more in line with the Russia-spec Creta.

Besides this, the Creta will also get a lot more tech with features like ADAS, improved Hyundai BlueLink connected car tech and a fully digital 10.25-inch instrument cluster. Mechanically, however, the Creta is expected to remain the same as the current model.

Hyundai is expected to introduce the Creta facelift sometime in the second-half of this year, after it launches the updated Venue.

The Hyundai Kona Electric was the carmaker’s first all-electric offering in India. Since its original launch in our market back in mid-2019, the Kona has received a mid-life facelift abroad. The facelift brought with it new styling to give the EV SUV a sharper and more contemporary look, with a redesigned front end, sleek headlights, re-profiled bumpers and new tail-lights.

Hyundai is set to launch the Kona EV facelift in India later this year and the electric SUV will be brought as a CKD unit, with a small level of localisation, just like its predecessor.

Which of the upcoming Hyundai SUVs are you looking forward to the most? Let us know in the comments below.

Obviously Hyundai All-New 4th Generation Tucson. Which month it is coming could you please let me know?

Hyundai tucson obviously!!! Pls update which month is its coming . Can't bear the suspense . Some say march, some june and others september or even December... only u , autocar can clarify!

Obviously Hyundai All-New 4th Generation Tucson. Which month it is coming could you please let me know?

Hyundai tucson obviously!!! Pls update which month is its coming . Can't bear the suspense . Some say march, some june and others september or even December... only u , autocar can clarify!