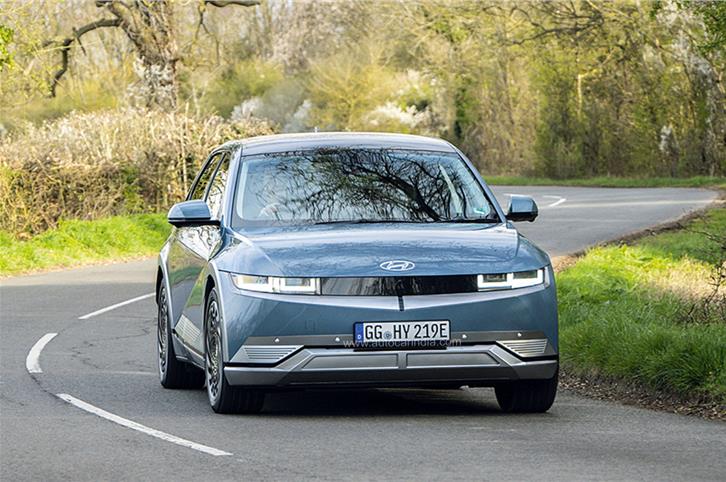 The ‘born electric’ Ioniq 5 is Hyundai’s next bet for India. Hormazd Sorabjee drives a slice of the future.

There are electric cars and there are electric cars. And they aren’t all the same. There’s the Hyundai Kona EV and there’s the Hyundai Ioniq 5 and they aren’t the same either. If you put your hand on the badge, you wouldn’t think they both belong to the same parent. In fact, you wouldn’t even think they share an electric powertrain! The Kona EV was designed originally with an IC engine and hence looks like just another petrol (or diesel) SUV. What gives you a small clue that it isn’t one is the blanked-out grille and all the EV info and data that pops up on the display screens when you start the car. But there’s no getting away from the Kona’s IC engine roots, which is evident in the overall stance and shape. That’s true of many other EVs in the Indian market, including the bestselling Nexon EV.

So, what’s an EV supposed to look like? Well, radically different and futuristic, for starters; EVs are the future, after all. And giving us a good look at the future is the Ioniq 5, which you can instantly tell is no ordinary car. That’s because the Ioniq 5 is ‘born electric,’ a term that is very much a part of the EV lexicon these days and stands for exactly what it suggests – cars that have been conceived to be driven purely by battery power and never with a conventional Internal Combustion (IC) engine. 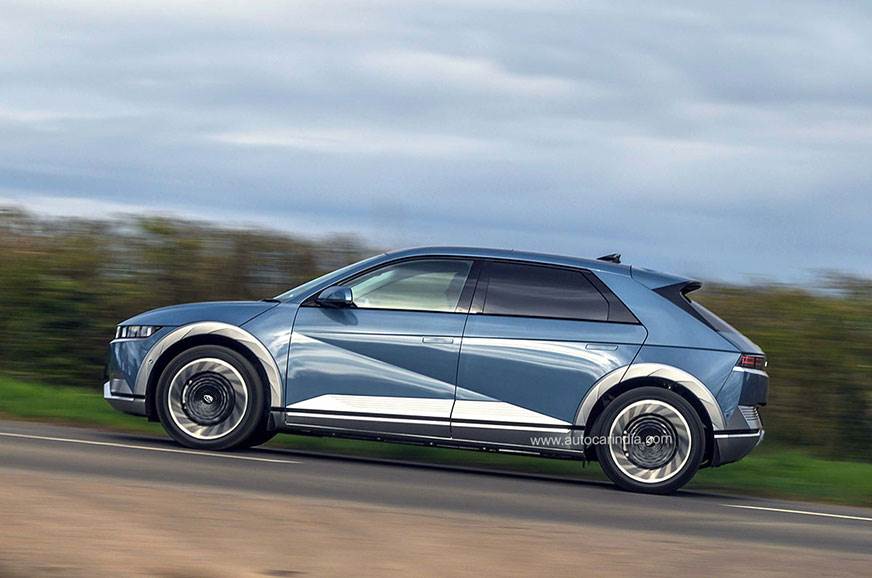 Styling is futuristic, yet reminiscent of ’80s hatchbacks.

The Ioniq 5 is Hyundai’s first ‘born electric’ EV, a new breed that is free from the packaging and design constraints of a lump of a transmission and driveline under the floor, an even bigger lump of an engine under the nose, and a fuel tank under the rear seat. It’s built on a bespoke platform, or ‘skateboard’, that’s been optimised for cost, space efficiency and, of course, electrification. And this skateboard is the Hyundai Group’s E-GMP (Electric Global Modular Platform) built around a battery pack, electric motors and allied components, with enough flexibility to spawn a wide range of body styles.

The Ioniq 5 will be the first of six all-new EVs that Hyundai will bring to India in the next five years. Slated for a mid-2022 launch, the Ioniq 5 will lead the Korean auto major’s ‘top-down’ approach into India. However, the Ioniq 5 won’t be cheap. It will be launched as an import, and though it’s an EV, it won’t get any customs duty concessions. We estimate the Ioniq 5 to cost between Rs 45 lakh-60 lakh, depending on the battery size and overall specs, which are yet to be decided. 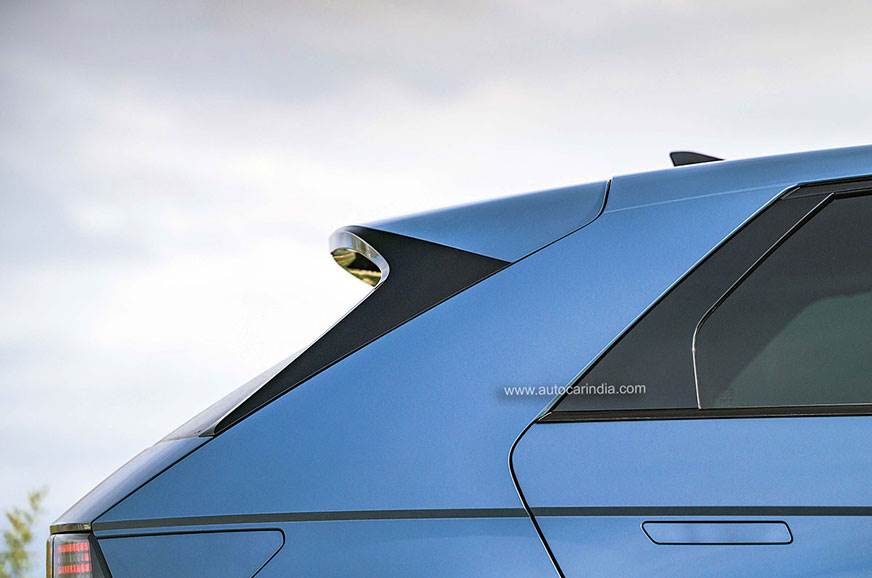 For a car that doesn’t have to be designed around the inflexible position of an engine and gearbox, the Ioniq 5, at first glance, looks quite conventional, almost disappointingly so. Gape at it a bit longer and the unique design mix of this bespoke EV begins to soak through. The angular proportions give it the silhouette of a 1980s hatch and the C-pillar has a touch of the Lancia Delta in it, but it’s the futuristic details that grab your attention. The body is replete with ultra-sharp cuts and creases, and the highlight is the Z-shaped slash on the flanks, which has a folded-paper effect. Flush door handles, the clamshell bonnet and 20-inch alloy wheels that look like they’ve been designed in a wind tunnel look very futuristic, but it’s the high-tech LED matrix light clusters that are its most innovative feature. The lights have a pixel theme that is carried throughout the car, and the rear, in particular, has a full-width matrix strip with a series of sci-fi looking square pixel lights. The coolest bit is the Daytime Running Lamp light bar on the top edge of the front bumper, which you don’t notice until it’s illuminated. The Ioniq 5’s unique lighting signature is what really makes it stand out and shows the world what the future of motoring looks like. 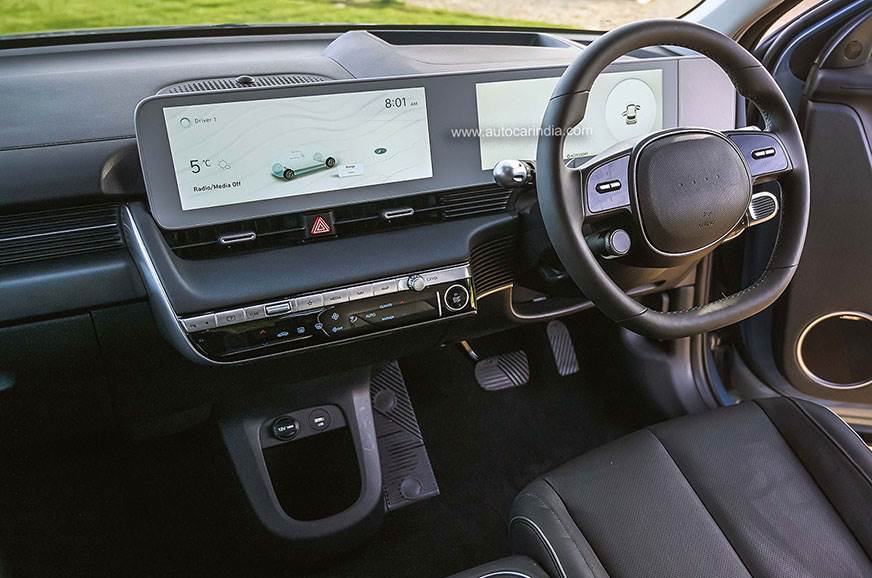 Dashboard a slim panel with screens attached onto it. Hard buttons not done away with yet.
The exceptionally long 3,000mm wheelbase and short overhangs are also clues that the Ioniq 5 is not a conventional crossover. Stretching the wheelbase as much as possible is a top priority when designing a ‘born electric’ car on a skateboard because it’s within the wheelbase that the battery pack is placed. Hence, a longer wheelbase means a bigger battery, which in turn means a longer range. Elongating the wheelbase has other advantages too – it frees up more space within the cabin and gives designers more room to play with. 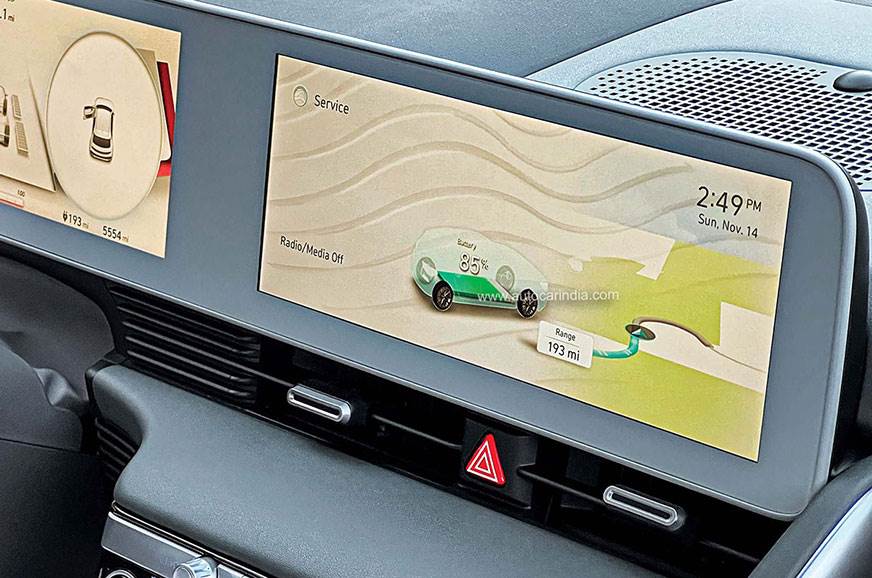 This is immediately obvious the moment you slide into the Ioniq 5’s cabin. Behind the wheel, it’s more like an office seat than a cockpit because the traditional centre console has been done away with. This frees up space ahead of the front seats which would otherwise have been taken up by the air-con blower unit, which has been moved to under the bonnet, where an engine typically sits. This relocation of the HVAC system is possible only in a ‘born electric’ EV and is a good example of the packaging benefits this bespoke architecture offers. With no centre console, the front seats can be moved forward to release more space in the rear. Not surprisingly, the rear seat is extremely generous, with more than enough room even for six-footers, and the completely flat floor makes sitting three abreast pretty convenient too. The flat floor has other advantages as well. It allows the console between the front seats to slide a good 140mm. So if you need a bit more legroom for the middle passenger behind, you can slide it forward. But, if those behind want easy access to the pair of charging points behind the console, it can be slid back. 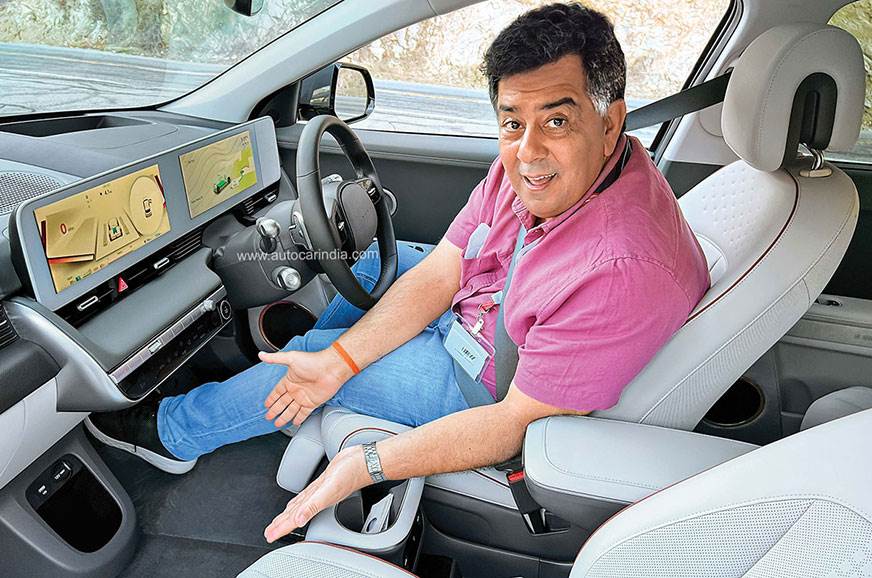 The missing traditional centre console frees up space ahead of the front seats.

There are also, however, disadvantages of the E-GMP, which have more to do with the slab of lithium sitting under the floor. The battery pack pushes the floor up and forces you to sit in a slightly knees-up position. It’s not uncomfortable but on long drives you will miss a lack of under-thigh support. The seats themselves are quite thin but you don’t feel a lack of cushioning, and the light, eco-friendly fabrics that adorn the rest of the seats have a minimalist appeal to them, which is in keeping with the car’s ‘save-the-world’ ethos. 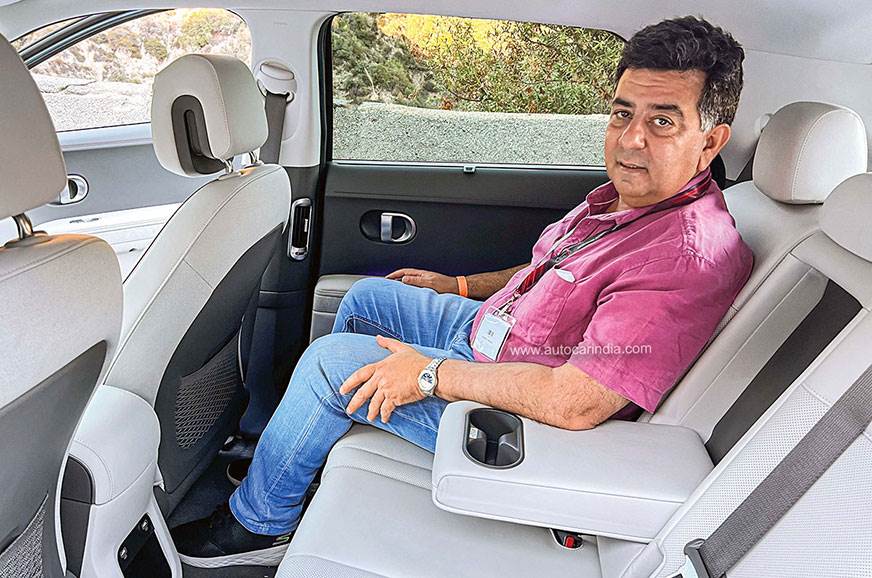 The dashboard is a simple and pancake-slim panel with a pair of 12.3-inch screens sitting on the top and a separate touch sensitive control panel for the air-con housed below. The touchscreens are super sharp, easy to read even in broad daylight and give you all the info you need. They are a touch slow to respond but a tweak in software should sort them out. The outer edge of the touchscreen panel is magnetic so you can attach toll tickets, parking receipts or pictures of your spouse, your favourite car (not a Kona EV, then!) or whatever you like.

The Ioniq 5 comes with a choice of two battery packs. The base model gets a 54kWh pack that’s good for 383km in the official test cycle, whilst a 72kWh battery stretches range to a claimed 481km. The E-GMP has a superfast 800V charging capability which, technically, can fully charge the battery in 18 minutes! But, in India, where most chargers have a 25kW or 50kW output at best, it will be a while before the Ioniq 5’s fast-charging capability can be used to the fullest. 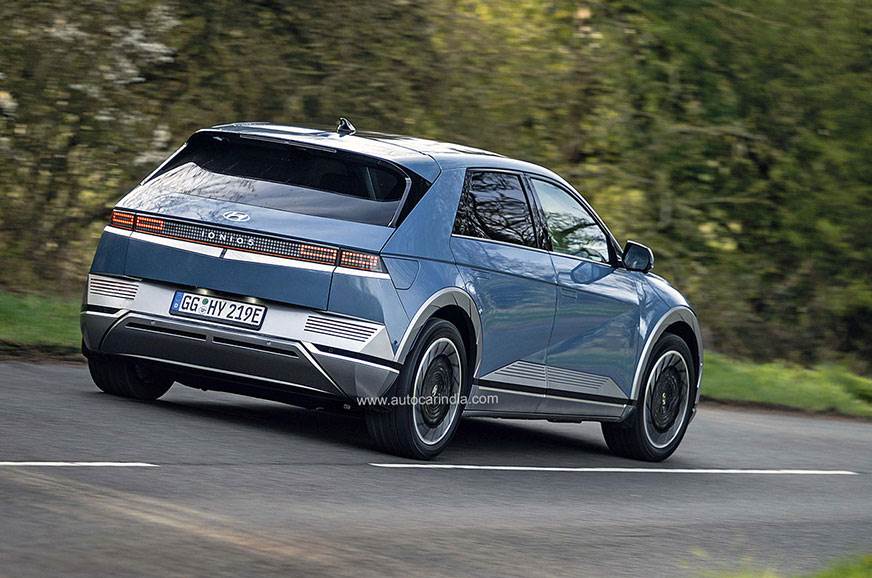 Impressively quick, with 306hp, and it disguises its weight quite well.

There are multiple power outputs as well; the base variant puts out 170hp and is rear-wheel-drive only. It’s likely that Hyundai will bring the top-spec variant that produces a more energetic 306hp and is a 4x4 as well with two motors (one for each axle). It’s this top-spec variant I briefly drove and, expectedly, it was impressively quick straight off the bat. We expect EVs to dart forward the instant you prod the accelerator and the Ioniq 5 does just that, like a rabbit prodded with an electric rod. It disguises its 2,100kg kerb weight rather well, be it in the way it accelerates or handles. Going from 0 to 100kph in a claimed 5.2sec makes it quicker than anything else for the money, and the effortless and noiseless way this car lunges forward is an added bonus. Like most EVs, the Ioniq too runs out of volts at the top end, and beyond 130kph, performance drops off quite sharply. It’s fast and effortless for most overtaking duties and a flex of the right foot is met with a satisfying lunge to the horizon, but what’s also obvious is that the Ioniq 5 is not a sporty, performance car and in fact feels quite the contrary.

The battery pack ties it down nicely and the steering is quick and accurate, but the overall dynamics won’t tempt you to seek out a twisty road or toss the car into a corner. What you get is an incredibly plush ride, a very relaxed and hushed driving experience, which, along with the spacious cabin, marks the Ioniq out as possibly the most comfortable EV you can buy. Yes, it will be expensive, but what you are buying is a piece of the future and right now, there’s no car as far ahead into the future as the Ioniq 5. 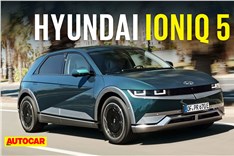