Despite the pandemic-induced loss in sales, the UV segment remains relatively unscathed. Here’s a look at the top 10 selling UVs in Q1 FY2022. 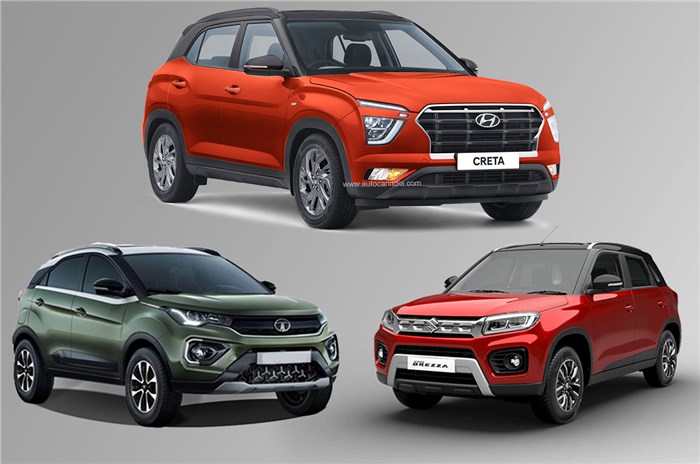 After a couple of months of slowdown in April and May due to the pandemic-induced lockdowns, auto sales in India picked up the pace again in June 2021. A total of 2,31,633 passenger vehicles were sold in India in June 2021, out of which 1,00,760 units or 44 percent comprised of utility vehicles (UVs).

Even looking at sales in the first quarter (April-June) of FY2022, out of total passenger vehicle sales of 6,46,272 units, UV sales accounted for 2,86,092 units, which is again 44 percent of total sales. The popularity of UVs (SUVs, MPVs and crossovers) has been on a gradual upward trajectory to the point that this is the only vehicle segment that has remained relatively unscathed in the pandemic – both in India and globally.

Growing UV sales can also be attributed to the numerous new launches in this segment in the domestic market over the last few months. The big contributors are 10 popular models, which make up for 68 percent of total UV sales in April-June 2021. Here’s a closer look at the 10 most popular SUVs/crossovers in India in Q1 FY2022:

This Q1 total comprises 15,499 diesel variants and 14,432 petrol, which makes for a 52:48 split in favour of diesel. The Korean carmaker’s strategy to remain bullish on diesel is paying off. The Creta’s pack of powertrains comprises 1.5-litre petrol, 1.5-litre diesel and a 1.4-litre turbocharged petrol engine options. Clearly, the new BS6-compliant diesel motor has outpaced the other two when it comes to market pull.

With 3,230 units less than the Hyundai Creta, the Maruti Vitara Brezza is at No. 2 position with 26,701 units. The petrol-only model remains a strong seller and outsold the Creta in June with 12,833 units compared to the Hyundai SUV’s 9,941 units.

Just 152 units behind the Nexon is Maruti Suzuki’s popular people-mover, the Ertiga MPV. In terms of fuel split, the Ertiga sold 7,453 CNG variants and 13,805 petrol. Maruti Suzuki is seeing growing demand for its CNG models, particularly in view of the steep and rising price of petrol, and the Ertiga is one of its models benefiting from this trend.

Kia India’s first product for India has been a consistent seller in the first three months of FY2022 with sales of 8,086 units in April, 4,277 units in May and 8,549 units in June. Of the cumulative sales, 12,095 units were petrol variants and 8,817 diesel. In FY2021, the Seltos was the fourth highest selling UV in India with 81,717 units. The Seltos has felt the heat from the new Hyundai Creta and its sibling, the Sonet – which is at No. 7 – too keeps pulling in the numbers consistently.

The Kia Sonet takes seventh position, just 598 units behind its sibling, the Seltos. It has been a consistent seller with 7,724 units in April, 6,627 units in May and 5,963 units in June. In terms of fuel-wise demand, Sonet buyers took home 13,005 petrol-engined variants while 7,309 diesel variants were also sold in the first quarter of this fiscal.

Mahindra & Mahindra’s warhorse, which has recently seen the launch of the Bolero Neo, is the first of three Mahindra UVs in this list with 15,413 units.

The Bolero Neo - repositioned TUV300 - has been launched at prices ranging between Rs 8.48 lakh and Rs 9.99 lakh (ex-showroom) and should continue the market drive. It expands the Bolero portfolio with a slightly modern flavour to the rustic Bolero line-up, which is a favourite among the rural buyers. However, unlike other compact crossovers, the Neo is more rugged with a body-on-frame construction and a rear-wheel drivetrain to remain true to the Bolero lineage.

The Scorpio, with 9,519 units, is at ninth place. Despite its age, the Mahindra Scorpio still ranks among the most popular SUVs in India. It offers a spacious cabin, robust build quality and a go-anywhere attitude. Mahindra is also gearing up to launch the next-generation of this true-blue SUV.

Wrapping up the Top 10 list is the XUV300 with 9,010 units. The XUV300 is Mahindra's response to the sub-compact crossover segment that includes cars of the likes of the Hyundai Venue, Kia Sonet, Ford EcoSport as well as Maruti Suzuki Vitara Brezza. The XUV300 is spacious and feature loaded and aces the safety chart too with a 5-star GNCAP crash test rating. 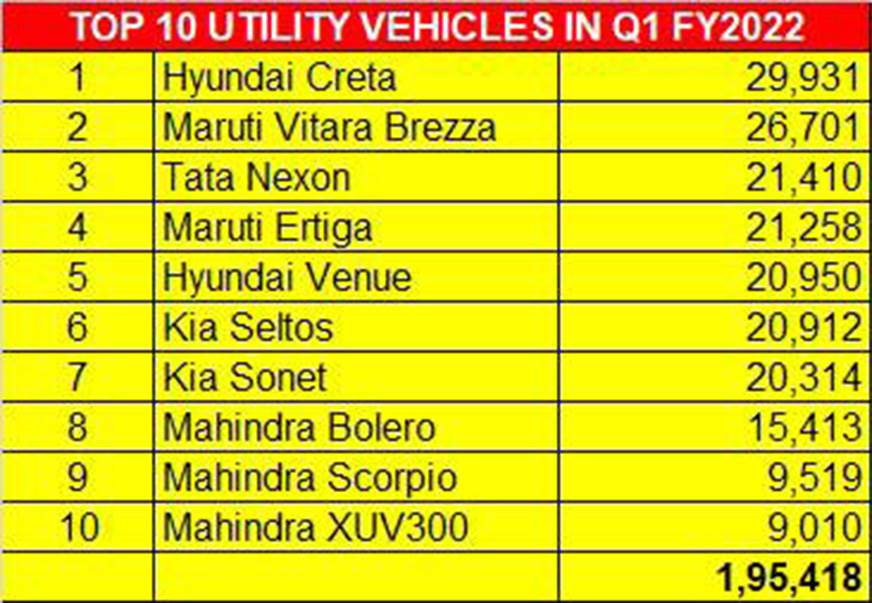 The UV market is only set to grow from here with more launches in the mid-size SUV segment. We recently saw the launch of the Skoda Kushaq and even the three-row mid-size SUV segment is set to expand with the upcoming Mahindra XUV700. Similarly, consumer appetite for compact SUVs continues unabated with as many as 5 models in the top 10 UV sales chart in Q1 FY2022. Furthermore, with demand from rural India picking up, there should be increased consumption for this vehicle segment from those regions.