Where does the recently launched BS6-compliant diesel MG Hector fit in compared to its diesel rivals? We find out. 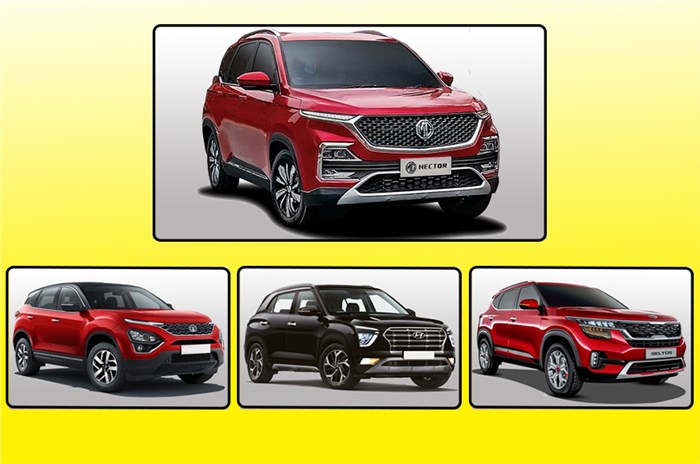 The BS6-compliant MG Hector diesel has arrived about three months after its petrol counterpart was updated to meet the new norms. As was to be expected, Hector diesel prices have gone by about Rs 40,000-45,000 depending on the variant - the range still consists of the same four trim levels: Style, Super, Smart and Sharp.

Another aspect that is unchanged is the engine-gearbox combination. Although the engine has now been updated to meet BS6 norms, it is still the same FCA-sourced 2.0-litre diesel engine that develops 170hp and 350Nm of torque as before. MG continues to offer a 6-speed manual gearbox, with no option for an automatic.

Now that the BS6 Hector diesel has been launched, we’ve compared its price to its diesel-manual competitors (as unlike the Hector diesel, all its rivals have an automatic option). Unfortunately, the Mahindra XUV500 could not be included in the comparison as the prices for the BS6 model have not been announced yet.

What is evident from the table is that the new Hyundai Creta is the most affordable offering in this comparison followed closely by the Kia Seltos. There is a considerable price gap between the Hector and both these SUVs. However, It is worth noting that while both the Hyundai Creta and Kia Seltos come with similar high-end features and tech, they are substantially smaller (dimensionally) than the Hector and also have smaller, less powerful engines - 115hp/250Nm, 1.5-litre units.

The Harrier is size-wise and price-wise a more direct competitor to MG’s SUV. The Tata Harrier’s starting price undercuts the updated Hector, with the base model costing Rs 19,000 less. On the other hand, the top-spec Harrier is Rs 1.23 lakh dearer than the equivalent Hector. Although the  Harrier got a longer list of features with its BS6 update, the Hector is still the more feature-rich SUV as it comes with connected car technology, a 360-degree camera, front parking sensors, ambient lighting and a larger 10.4-inch touchscreen infotainment system (compared to the Harrier’s 8.8-inch unit).