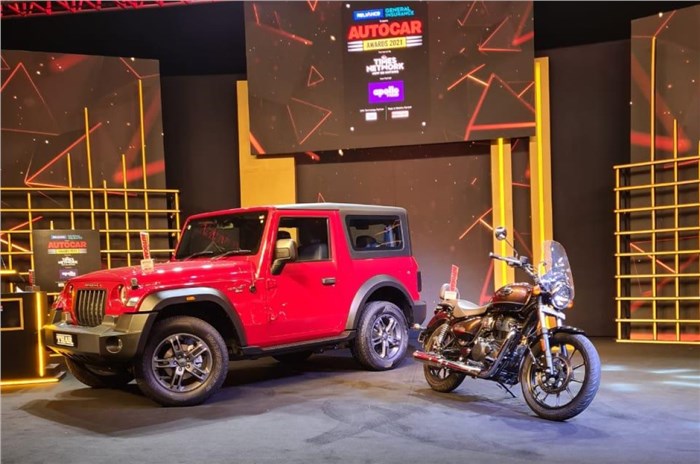 The Mahindra Thar has just been declared Car of the Year at the 2021 Autocar Awards, while the Royal Enfield Meteor 350 took home the trophy for Bike of the Year. The top prize at this year’s award came down to the wire on points between the Mahindra Thar and the extremely well-appointed Kia Sonet compact SUV, but it was ultimately the homegrown off-roader that only just edged ahead. In its second generation, the Thar has evolved from being just a purpose-built off-roader to a comfortable, easy-to-drive mid-size SUV that could even be a daily driver; but it retains its off-road ability and even surpasses its predecessor in this regard. As a result, it’s opened up a new niche in the mid-size SUV market and it’s been a resounding success ever since its launch.

The 2021 Bike of the Year, the Royal Enfield Meteor 350 with its new platform proved definitively that the brand does more than just pander to nostalgia. In a segment that’s recently spawned so many competitors, the brand that popularised it rose to the top, not only with a superior product but also its aggressive pricing.

It’s no surprise then that 2021’s top two four-wheeled contenders took home wins in their respective segments, the Thar winning Mid-size SUV of the Year and the Sonet, Compact SUV of the Year. Moving up from there, the mammoth MG Gloster won Premium SUV of the Year, while the Mercedes-Benz GLE, with its finely honed mix of space, luxury, tech and capability, bagged the Luxury SUV of the Year prize.

The Green Car and Green Two-Wheeler titles this year were both won by Indian brands, namely the Tata Nexon EV, which has truly brought desirable electric motoring to the masses, and the Ather 450X, which has proved an Indian start-up can deliver a world-class, cutting-edge electric scooter. In a world overflowing with SUVs, there are still some impressive sedans being launched, like this year’s Sedan of the Year winner, the Honda City and Luxury Sedan of the Year – the Audi A8 L, both of which took the game ahead in their segments.

Styling is usually quite subjective, but there was little doubt among the jurors when it came to this year’s winner of the Design & Styling Award. Tata Motors’ Altroz premium hatchback truly takes new strides in a segment where it pays to be desirable. However, while style is one thing, a sure-fire formula for success in India is value for money, and the Nissan Magnite has come closest to perfecting that formula, offering everything we want in a compact SUV and then some, at the price of a premium hatchback.

Speaking of premium hatches, however, it’s the Hyundai i20 that took home the 2021 Hatchback of the Year award, as it once again moved the goalposts for its segment, leaving its rivals with a lot of catching up to do. In a similar vein, the Kia Carnival won Premium MPV of the Year, showing that there is a market for an MPV that doubles down on creature comforts, even if they come at a premium price.

The 2021 Car Variant of the Year is the Skoda Rapid 1.0 TSI Rider/Rider Plus, whose incredible value proposition breathed new life into an ageing product. On to higher-octane vehicles – the Performance Car, SUV and Bike of the Year were benchmarks in their segments – the BMW M8, Audi RS Q8 and Ducati Panigale V2, respectively.

Staying with two wheels, the maxi-style Aprilia SXR 160 won Scooter of the Year, the Triumph Street Triple R won Premium Bike of the Year and BMW’s big 1,800cc cruiser the R18 rumbled away with the Import Bike of the Year trophy.

On to the industry at large, Hyundai Motor India was awarded Manufacturer of the Year for its barrage of strong new launches during the pandemic, its persistence with small diesels through BS6 and its dominance of the SUV segments. Tata Motors’ President – PVBU, Shailesh Chandra has been awarded Person of the Year for his instrumental role in not just pushing Tata’s EV business and the Nexon EV, but also turning around Tata Motors’ fortunes on the whole. And finally, the Lifetime Achievement Award was conferred on Dr Pawan Goenka, managing director of Mahindra and Mahindra, for helping turn the company into the global automotive giant it is today.

Those were the best cars, motorcycles and people from the auto industry that emerged strong after a less-than-stellar 2020. As the industry slowly rises back up, what does next year have in store? See you at the 2022 Autocar Awards.

Car of the Year – Mahindra Thar

Car Variant of the Year – Skoda Rapid 1.0 TSI Rider/Rider Plus

Value for Money Car of the Year – Nissan Magnite

Sedan of the Year – Honda City

Hatchback of the Year – Hyundai i20

Scooter of the Year – Aprilia SXR 160