It has come to India long after its global debut. So has Audi’s new flagship sedan been worth the wait? 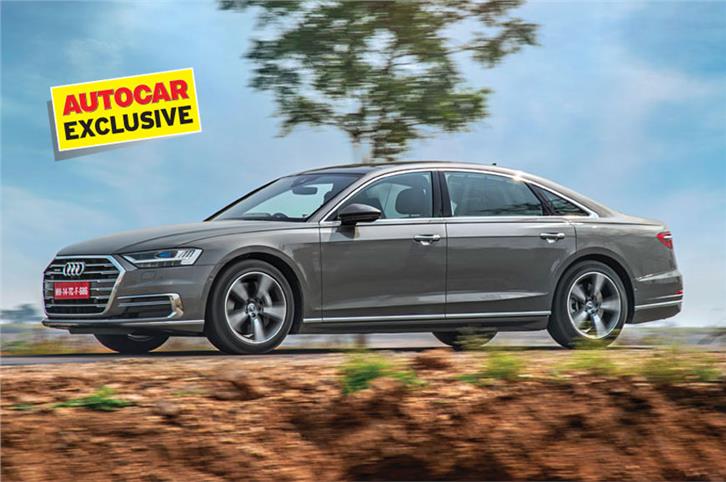 Yes, two-and-a-half years is a long time, especially given a car’s typical life cycle, which tends to be about eight years, give or take, including the facelift. Even if this latest D5-generation Audi A8 sticks around for a decade, that’s a quarter of its life lived before coming to India. It’s easy to point fingers at Audi India for this, but the truth is, it was out of their hands, and was instead a trickle-down fallout of the Ingolstadt HQ’s bigger efforts to right itself after the ‘Dieselgate’ scandal and upgrade all its engines to meet new European emissions standards. And since the A8 is brought to India as a full import, and production of the previous car made way for the new one, you couldn’t even buy the old car here. Can you imagine having to turn away a valued customer who wanted to buy your flagship offering, and watch them go straight to your rivals instead? Couldn’t have been easy.

But I really do digress, because oh boy, have they made it worth the wait.

The new A8 L wears its limousine heart on its sleeve. If the 10ft (3,128mm) wheelbase wasn’t enough, the rear overhang extends far out, making it look like a proper stretched sedan. What also helps is the window line, which stretches far back beyond the actual seating area of the cabin, giving it a curved, coupé-like shape without compromising on headroom. This test car sits on a set of rather racy, five-spoke, 19-inch wheels, but that’s the only sporty touch you’ll see here. 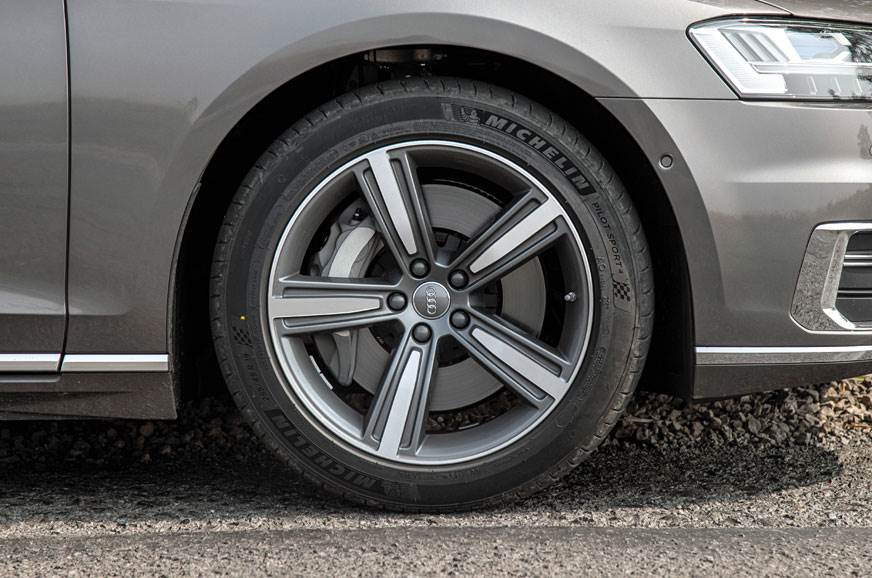 If you thought BMW’s new grilles were big, remember Audi’s been doing its ‘Bulgarian Beard’ single-frame signature for far longer – and this latest one, finished in chrome, is its biggest yet. There’s plenty of chrome elsewhere too – in the fog lamp surrounds, at the base of the doors, in the tail-lamp cluster and all over the rear bumper. This might seem a bit excessive at first, but to deliver that all-important road presence for a luxury car,it just works.

As with previous A8s, there’s been no attempt at making this car look sporty or overly curvaceous. It’s all business, with straight lines and creases, and bold details at the front and rear to liven things up.

The back seat is, of course, where you gravitate to in a car like this, and Audi has really gone to town here. First, there’s no more bench seat and the split rear cabin is standard – that means a tall centre console running between the two chairs, which houses the cupholders, the central AC vents, seat controls, the optional rear wireless phone charger, an optional mini-fridge located in the boot, and a small command centre that centres around a removable touchscreen tablet. This operates every single function of the rear seat – sunshades, sunroofs, lights, climate control, media and the seats themselves. 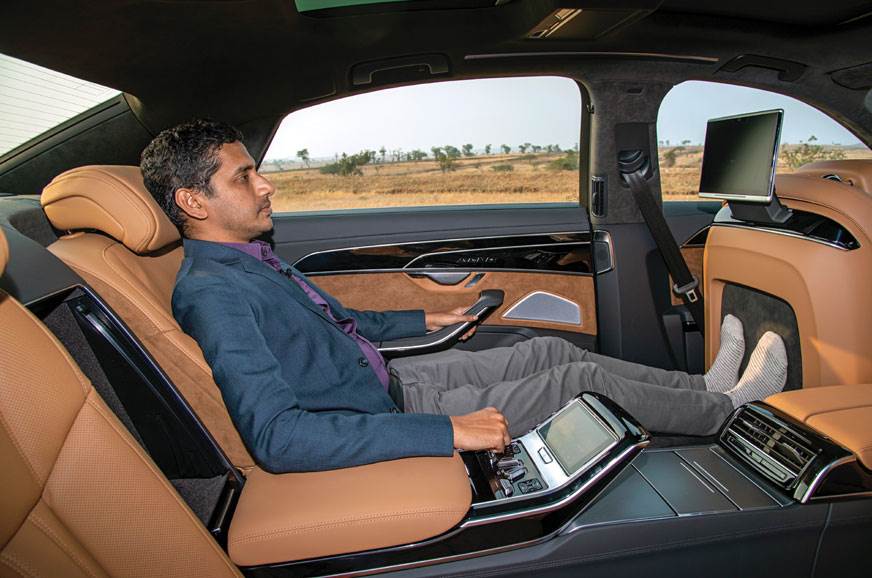 Acres of space, as expected, but there are lots of toys to play with too. Split rear cabin is standard and front-passenger seat can move forward for maximum legroom.

The rear seats – they’re what really set this ‘limousine’ class of luxury sedans apart from everything else on the market. Sure, the long-wheelbase Mercedes E-class also gets reclining seats and added legroom, but the A8 and its cadre of competitors are in a whole different league. And they should be, with an asking price that’s around twice as much as the class below! 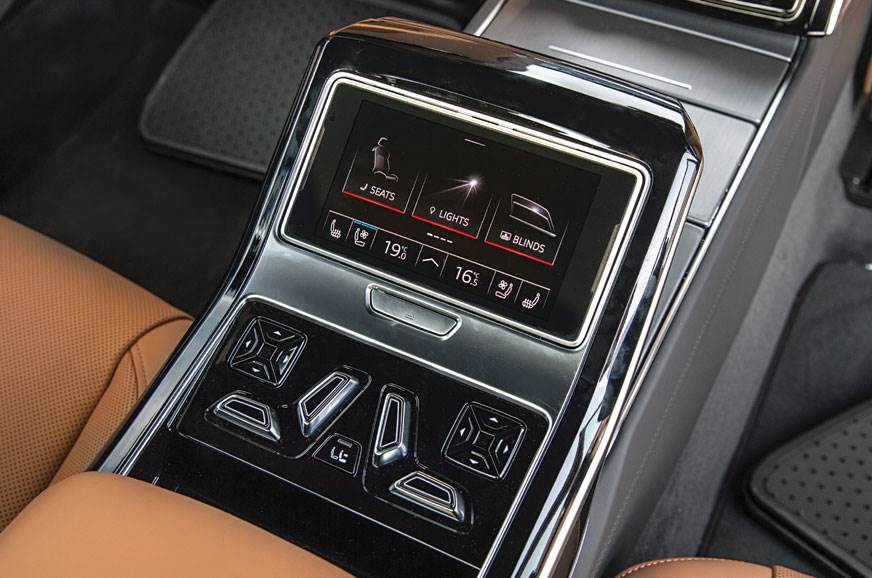 Heating, cooling and massaging seats are the norm here, as are the entertainment screens, panoramic sunroof, and powered sunshades for the entire rear cabin. Though the sheer plushness of the cushioning might still fall a degree or two shy of what you’ll find in an S-class, it’s near impossible to fault the back-seat comfort of the A8 L. Aside from the huge amount of adjustments you can make to it (including folding the front passenger seat all the way forward) there is the optional foot-massage system, which is unique to the Audi. Built into the back of the front-passenger seat, this heated pad kneads your soles into submission; and combined with the seat massage function, is a recipe for a nice long sleep. 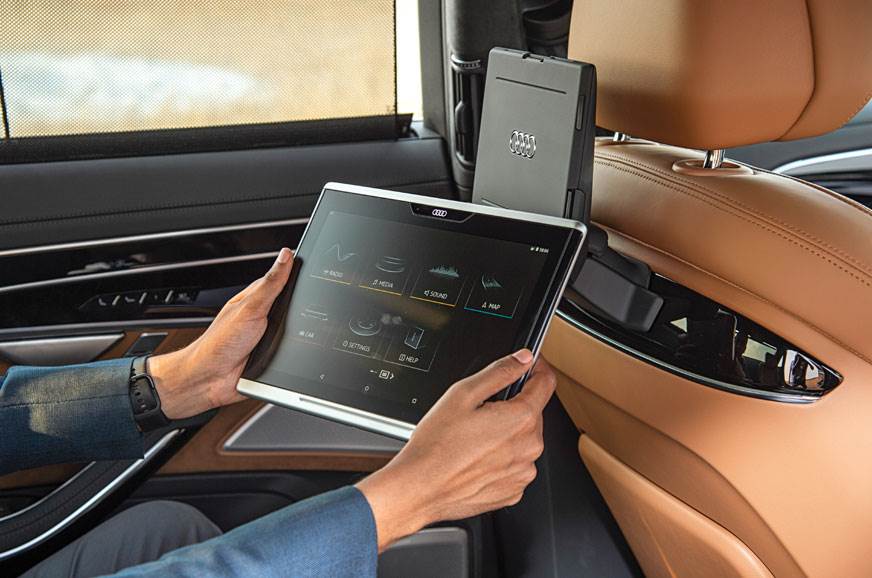 Rear screens are fully connected Android tablets that can do video conferencing.

There’s even more to the rear entertainment system than meets the eye. The screens are actually detachable Android-powered tablets with internet connectivity and full functionality – which means, apart from ‘pushing’ commands to the main infotainment system and getting real-time driving data on the car, you can stream Netflix to your heart’s content back here. What’s more, you might as well shut down your office, because the front-facing cameras in these tablets will let you video-conference directly from the back seat!

It’s unlikely, but should you feel the need to give your chauffeur the day off and drive yourself to the golf club, you’ll be well catered to in the A8 L. It’s being launched in the 55 TFSI guise in India, and that means a 340hp/500Nm turbocharged petrol V6 engine with a 48V mild-hybrid system channelled through an 8-speed torque-converter automatic and, of course, Quattro all-wheel drive.

Now you’d have read our review of the Q8 on the pages prior, and while it’s the same engine under the SUV’s bonnet, in this 160kg lighter sedan, it feels noticeably sprightlier. Audi claims it’ll do 0-100kph 0.2sec quicker than the Q8 too, taking just 5.7sec, and though that’s pretty quick for a limo, this is not a sporty engine by nature. Yes, a hard launch will yield the requisite results and scare your business associates into signing on the dotted line, but in most driving situations, power delivery is gentle, smooth and even more refined. And while you’d want a bit of sport in the Q8, in this A8, you absolutely do not.

Similarly, the driving dynamics – you simply don’t want to put this car in Dynamic mode. Even when I wanted to go quicker, I found myself dialling just the powertrain into ‘Dynamic’ and leaving the steering and suspension at their soothing, mushy best. We’ve brought the A8 L out of its comfort zone and onto some rather unsavoury rural roads, and, frankly, that extra degree of absorption you get from ‘Comfort’ allows it to ride absolutely flat over a patchy road; and even when the going gets smooth, things aren’t overly floaty. Credit must also go to the fitment of 19-inch alloy wheels that take some of the hit; 20-inchers are likely to be optional, but 19 feels like the sweet spot for comfort.

Like with the Q8, the agility of the A8 L comes as a big surprise, and that’s mostly because of the optional rear-wheel steering. Pair that with a light and effortless feel at the wheel and you get a 5.3m sedan that tucks into traffic gaps like a hatchback. Also, when you’re changing lanes at high speed, stability isn’t compromised as the rear wheels turn in the same direction as the fronts, rather than the opposite. 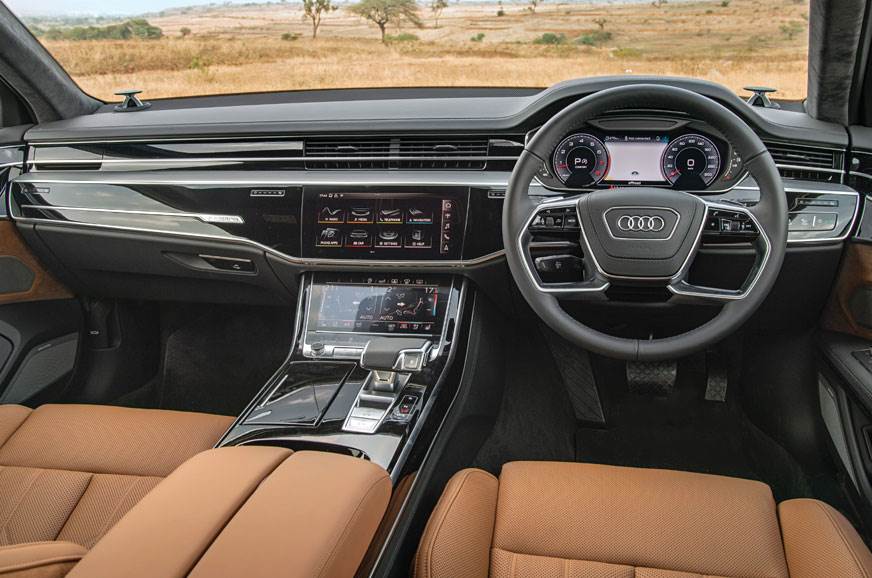 ‘An elegant tech fest’ best describes the A8’s cabin, which can be widely customised.

Things aren’t all that rosy from the driver’s seat though. The huge transmission tunnel means the driver footwell is very narrow, there is an uncharacteristically audible squeak that emanates from somewhere behind the centre console on a bumpy road, and at certain times of the day, the huge plank of glossy black plastic trim on the dashboard throws up huge reflections.

Though not as much as the back, the front half of the cabin has a lot of the wow factor too, with things like air-con vents that glide gently open when you slide your finger across the touch-sensitive control strips. The dual-touchscreen MMI system is present, of course, blending itself away into the piano-black fascia when switched off, and as we’ve documented in the past, it looks amazing and is feature-packed, but can be tricky to use on the move.

If you’re looking to buy your next limousine you’ve got a very compelling option in the A8. Imported as a CBU with a starting price of Rs 1.56 crore (ex-showroom, pan-India), the A8 L 55 TFSI is a bit more expensive than six-cylinder-petrol-powered versions of its locally assembled rivals, the S-class and 7 Series. The differentiator, like with the Q8, will be an intense level of customisation. Customers will have access to the full Audi Exclusive catalogue of paints, upholstery, trims and wheels, which should ensure that each car stands out. Moreover, though there are equipment options to choose from, the standard specification is very generous; so even if you don’t want to spend a rupee more than the starting spec, you’ll still get a comprehensive luxury experience.

Audi knows it has lost precious ground to Mercedes and BMW in this top tier of brand-defining flagship luxury sedans, and to make up for it, it’s pulled out all the stops with the A8 L, offering a no-compromise package that’s sure to make an impact as large as the grille on its nose.