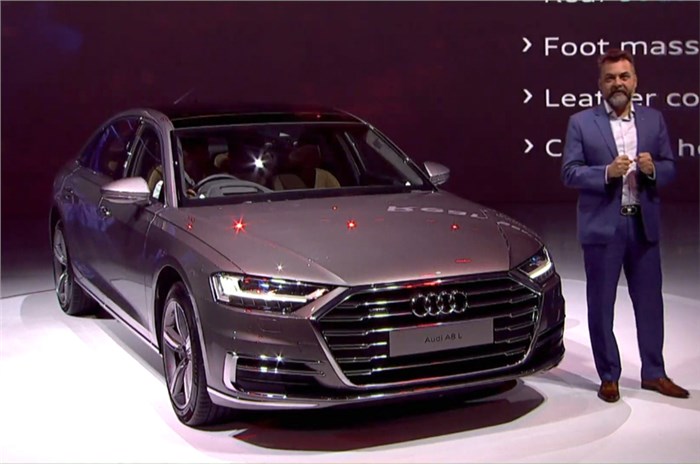 Hot on the heels of the Q8 SUV launched last month, German automaker Audi is continuing with its product assault for the Indian market in 2020 with the introduction of the flagship A8 L sedan at a price of Rs 1.56 crore (ex-showroom, India). Launched in a single 55 TFSI trim level, the fourth-gen luxury sedan boasts of cutting-edge and class-leading features, which puts greater emphasis on rear seat passenger comfort.

The A8 L is powered by a 3.0-litre turbocharged V6 petrol engine that is mated to an 8-speed automatic gearbox and comes with a permanent all-wheel drive system. The engine's 340hp and 500Nm of torque is capable of propelling the near two-tonne Audi from 0-100kph in a claimed 5.7 seconds. The powertrain is also equipped with 48V mild-hybrid technology consisting a belt-starter generator and a 10Ah lithium-ion battery pack. The hybrid system allows the vehicle to coast at speeds from 55-160 kph with the internal combustion engine switched off, for up to 40 seconds. To that effect, the company claims that this tech can deliver fuel savings of up to 0.7 litre per 100km. Moreover, all-wheel steering and adaptive air suspension are available as options.

Though the automaker's range-topping sedan is also available in standard (A8) guise internationally, it is only the long-wheelbase model (A8 L) that has been introduced in our market. Based on the MLB Evo platform, the new A8 L measures 5,302mm in length, 1,945mm in width and 1,488mm in height. This makes it 37mm longer and 17mm taller than the outgoing model, albeit 4mm narrower. At 3,128mm, the wheelbase has grown 6mm as well. 19-inch alloy wheels are standard.

The latest-gen A8 L, which made its world premiere back in 2017, has received a thorough makeover compared to its predecessor, bringing it in line with Audi's latest design language. It gets a more prominent hexagonal grille, sleeker headlamps (which are now HD Matrix LED units), sharper and tighter surfacing and slimmer OLED tail lamps connected by a full-width light bar.

On the inside, the cabin is new-age Audi as well. In its pursuit of an elegant and clean design, the brand has done away with most of the physical buttons and replaced them with a bevy of touch surfaces. The dashboard features a 10.1-inch infotainment touchscreen for controlling navigation and media and another 8.6-inch curved display below for operating climate control and seating functions. The company has equipped the surfaces with haptic and acoustic feedback for improving usability on the go. There is a standard Bang and Olufsen 3D surround sound system, which audiophiles can optionally upgrade to a 1,920W, 23-speaker system. An advanced voice command function further adds the ability to control various functions using natural language speech.

Other highlights include a new-look multifuction steering wheel behind which sits Audi's crisp 'Virtual Cockpit' digital instrument cluster and an optional head-up display. Ambient lighting and a seat massage function are also part of the package.

Being the German marque's flagship sedan, the A8 L focuses on rear passenger comfort with a twin-touchscreen rear seat entertainment package, remote control to operate numerous convenience features and a footrest mounted on the backrest of the front passenger seat with a foot massager.

Being a complete import, the A8 L comes with a high degree of customisation, including 54 exterior colour options and a wide array of interior trims and upholstery choices. Bookings for the sedan have already been underway at Audi dealerships since the second half of 2019. The Audi flagship goes up against the Mercedes-Benz S-class, BMW 7 series, Jaguar XJ L and Lexus LS500h in our market.