Find the Street Triple RS too expensive? The R might be the answer. 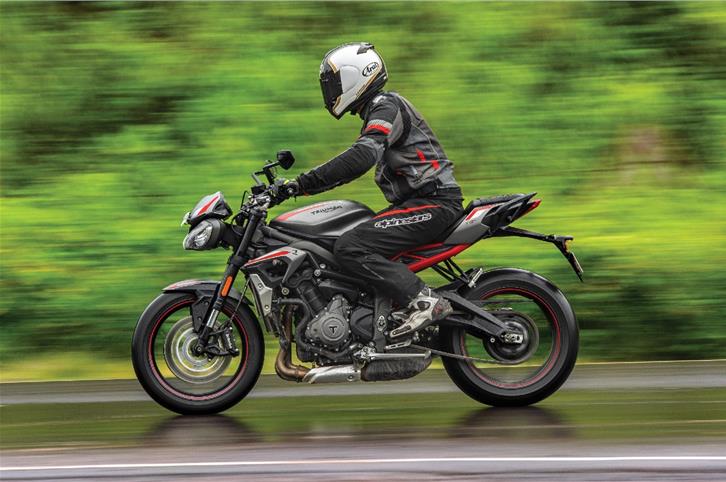 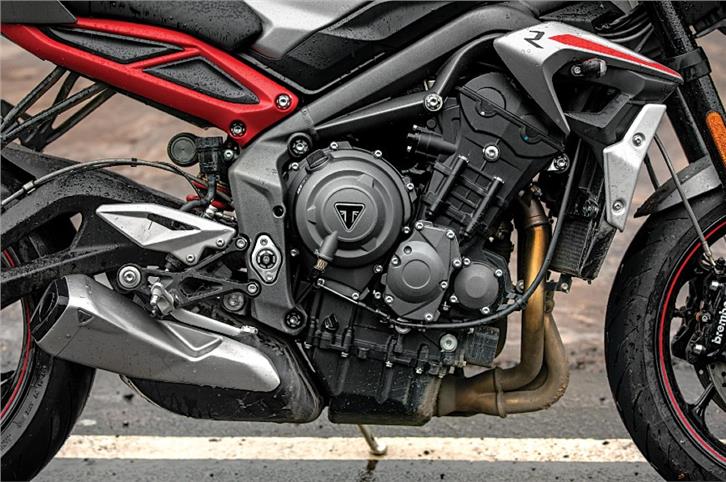 An RS-inspired belly pan would have looked quite nice. 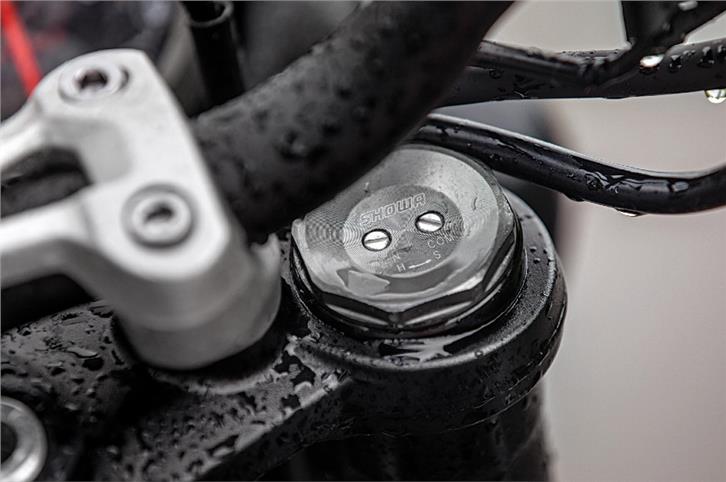 The 41mm Showa SF-BPF is fully-adjustable.

Middleweight nakeds are special machines. In their latest forms, they can achieve quicker lap times than full on superbikes from less than two decades ago. These motorcycles offer impressive, trickled down performance and equipment in a usable and accessible package. The Street Triple RS is the crème de la crème of this segment, but it’s not exactly affordable and it falls in a price bracket that might be too big a hurdle for many. This is where R comes in, replacing the comparatively modest S in India, while giving buyers a taste of the accomplished RS.

To find out if the Street Triple R delivers, Rishaad and I set out to a stretch of twisties not too far from the city. Despite my consistent prayers for the last five days, it began raining right as we rode out. That said, riding in the rain does have its own charm and we weren’t going to let it play spoilsport. 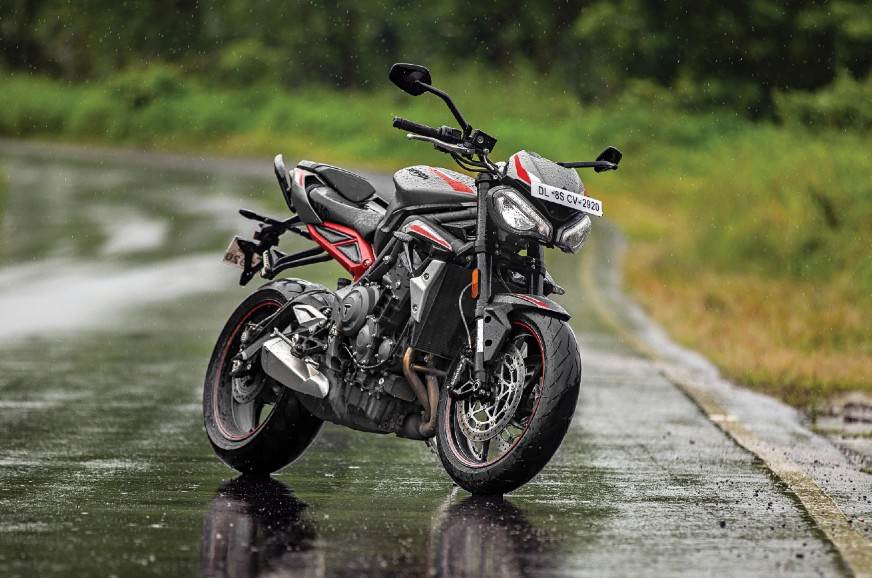 Like almost every early morning ride out of the city, we had to deal with some quick-moving traffic. Oh, I almost forgot to mention: Rishaad was not riding pillion. He was on his own, almost equally matched, ‘orange’ motorcycle. The first thing you’ll observe about the R is that the ergonomics are quite aggressive for a naked, and it’ll take you a few minutes to get used to how high your feet sit. Something else you’ll quickly notice is that the seat is narrow near the fuel tank, and while it is quite soft, it also slopes upwards at the back and you constantly have to readjust yourself.

As we began riding out through heavy traffic, there were those typical Triumph Triple moments where I found the revs were getting a little too low at crawling speeds and found myself having to slip the clutch more than I would’ve liked. Like every other Street Triple though, the R continues to be welcoming and it feels light on the move and unintimidating. The bike doesn’t shoot ahead at low revs and the bi-directional quickshifter works as expected. Rishaad is riding like a man on a mission on his motorcycle, but the Street Triple is so friendly and predictable at urban speeds that it didn’t take me much time to match his pace in traffic, despite not having ridden a big bike for well over six months. The inline three-cylinder engine also hums along at these speeds and vibrations are well isolated.

As the roads began opening up, I finally got the opportunity to open the throttle. The R makes the same torque figure as the RS, and at 118hp, it’s down by just 5hp. Its engine runs a slightly lower compression ratio and Triumph also says that it uses a different crank shaft. The power difference was hard to spot really, especially on our limiting roads.

What also remains the same is that it’s missing that low-end urgency you’d want from a bike in this segment, something that was clear after riding the rampant 790 Duke. Don’t get me wrong, the bike is pretty quick, but it feels quite mellow below 6,000rpm. However, I quickly realised that things are far more exciting when you keep the bike in the hotspot of its powerband. 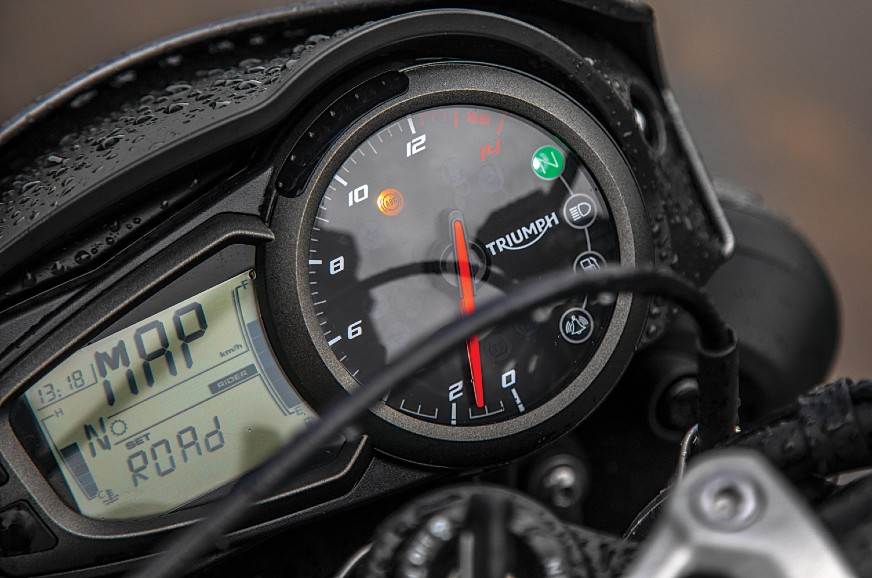 It’s at this point that you also get the best soundtrack, where the engine hum gets a bit louder, but the mean intake howl overpowers it. Despite having one of the lightest kerb weights and shortest wheelbases in the segment, the Street Triple R feels exceptionally stable on the highway. The fully adjustable Showa Separate Function Big Piston fork and monoshock did feel firmer than the old Street Triple S, and more like the suspension you’ll find on the RS. But the bike could still deal with poor roads quite well, and with 160mm of ground clearance, it could take on speed breakers admirably too.

Speaking of the suspension, this is also one of the best setups at its price point, from a sportriding point of view. While it is firm, the adjustability will give the rider the ability to fine tune it to their weight and liking. What also really helps with handling are the Pirelli Diablo Rosso 3s. These all weather sport tyres do a good job on our roads in terms of grip and feedback. They also proved to be really good at putting the power down on wet roads.

When we were riding on a twisty stretch, I realised something that I found quite special about This Triumph. For the first time on a big bike, I found myself focusing on my riding and not controlling the motorcycle. The only other big bikes I’ve ridden on a twisty section have been from two ultra-premium Italian brands, and controlling those  beasts took all of my attention. Whereas the poised and predictable Triumph gave me the confidence to experiment with my lines, inputs and riding position. 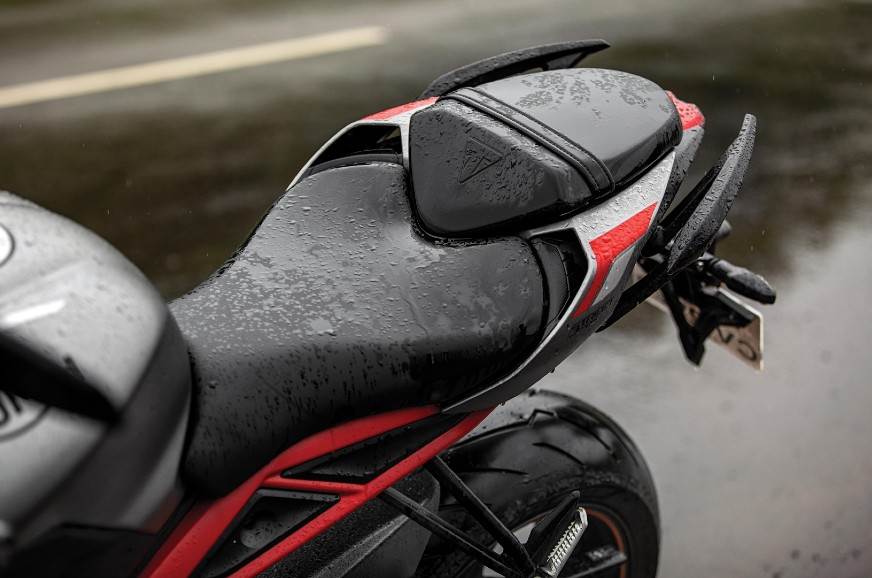 The sloping seat will require you to hold yourself in place.

The linear powerband, near flat torque curve and dynamic chassis are the biggest contributing factors to the R’s easy-to-hoon nature. While I enjoyed it, more experienced riders, such as my boss, find it, for lack of a better description, ‘a bit too well behaved’ and that you have to ride it very fast to properly enjoy it. He went so far as to say it almost feels Japanese in the clinical and super-refined way it delivers its performance. To be honest, I do see where he’s coming from,  especially after having ridden his twin-cylinder hooligan.

That being said, the Triumph would wipe that demented smirk off his KTM’s face on a racetrack. Riding side by side, it was clear that the Triumph accelerates harder and that its suspension and brakes are more sophisticated. Speaking of the Brembo M4.32 monobloc calipers, they aren’t as mighty as the M50s on the RS, but they do offer a wonderfully powerful, immediate and sensitive feel – you really don’t need any more on the road. As for the four riding modes, there really isn’t a huge difference to be felt between them. Road and Sport were the ones I found myself using the most, because the traction control was quite intrusive in Rain mode, as it should be. This is actually the one area where Triumphs lag behind the European competition and their electronic rider assists are relatively quite simple and crude in the way they function.

The Street Triple’s design has become iconic. Ever since its introduction, it used minimal bodywork and the twin-headlight setup similar to the Speed Triple. Over the years, the headlights went from being round to what has become an almost triangular shape. As for the bodywork, it’s still quite scanty, but a lot more aggressive.

What comes as quite a surprise is how similar the bike looks to the flagship RS variant. It use identical bodywork, wheels and lighting. The R is also available in the matte grey colour scheme that looks almost identical to the one on the RS, with the only difference being the additional red panel and silver decals. Similarly, the second colour option for both bikes is black as well, albeit in a gloss finish with red decals on the R. 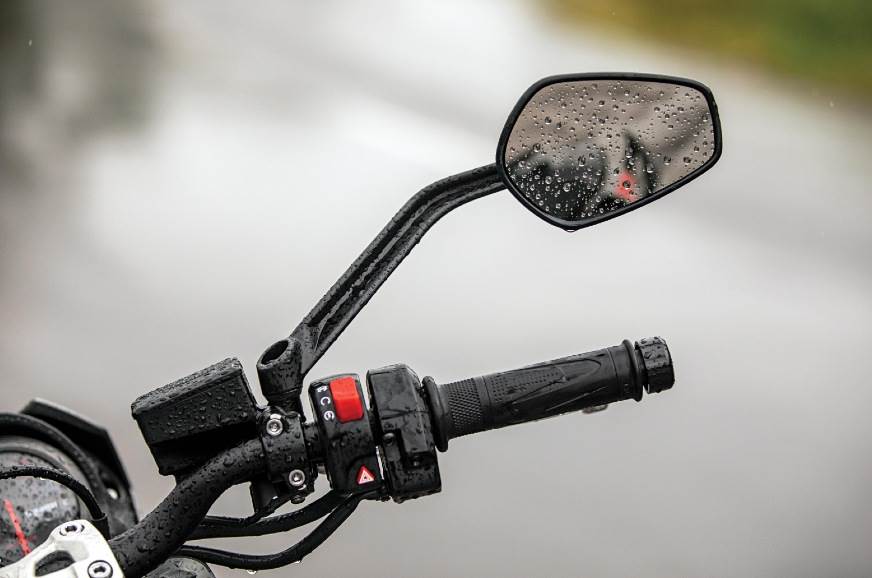 Swanky mirrors tie in nicely with the bike’s design.

In typical Triumph fashion, the bike is put together really well: there are no abnormal panel gaps, the welding beads on the frame are near perfect and there are no exposed wires. The new rear-view mirrors, meanwhile, look like works of art. Overall, the design still works, but it’s starting to look a little old-school. What we don’t like is how it’s only available in two dull colours.

The most obvious visual differences between the R and the RS are the lack of a belly pan and the digi-analogue gauge in place of the fully-digital display. The former is something the bike could have done with, but the latter isn’t that bad. The digi-analogue gauge shows you all you need to know, including the riding modes, traction control and ABS settings. This also might be one of the last few sport-nakeds with a pure analogue RPM gauge, and it’s something I am going to miss.

IS IT THE ONE?

Triumph has to be given credit for the Street Triple R’s price tag of Rs 8.84 lakh. The mouth-watering price tag makes it Rs 2.5 lakh cheaper than the top-spec RS. That makes it significantly more attainable and it feels like a huge improvement over the old S, and not too far from the RS. As for current competition, it’s more expensive than the new BS6 Z900, but costs significantly less than the BMW F 900 R. For what you get, the Street Triple R’s pricing is very tempting, and this sport-naked is for you if you want something that’s refined and versatile, yet incredibly quick when you want it. 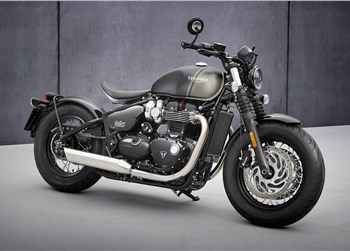 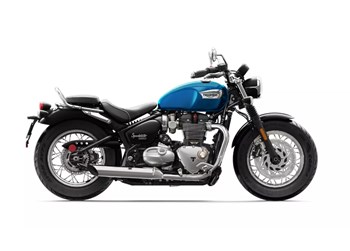 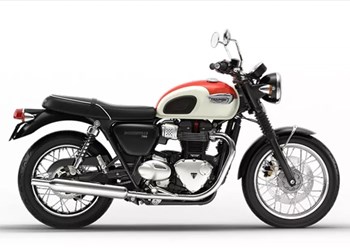 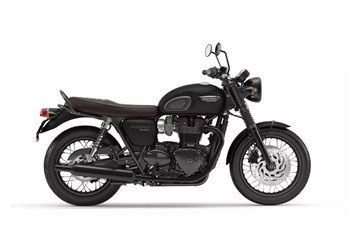 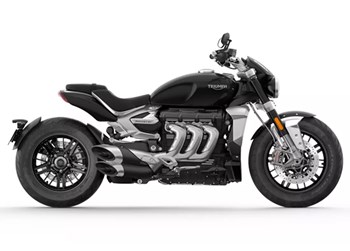 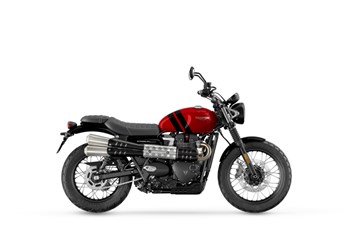 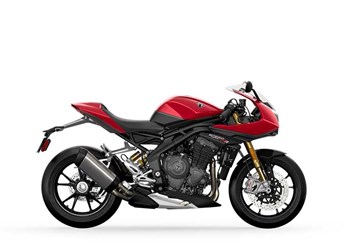 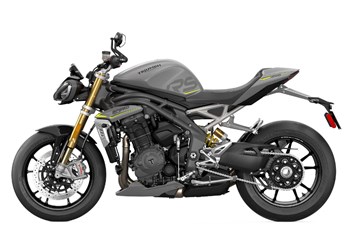 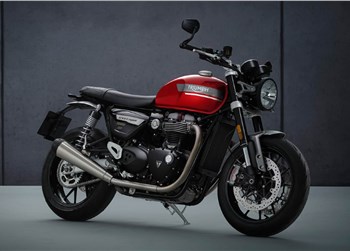 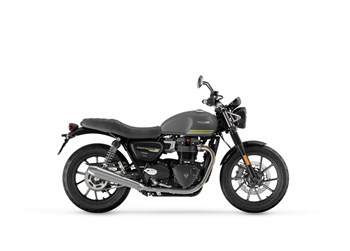 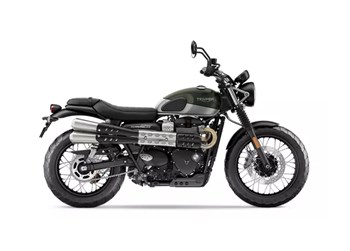 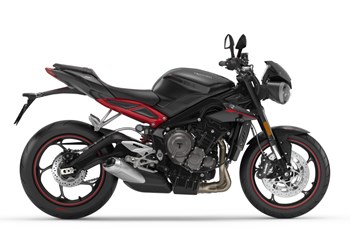 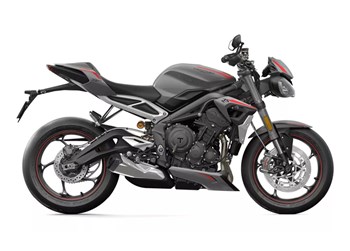 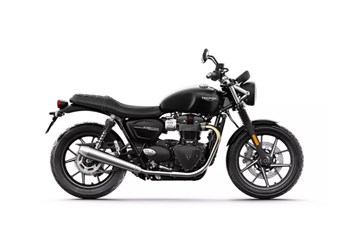 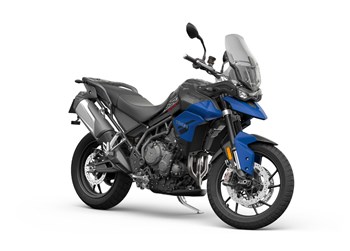 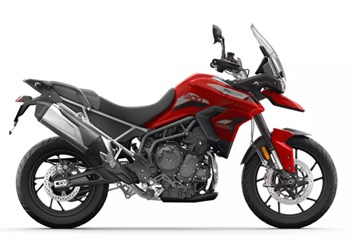 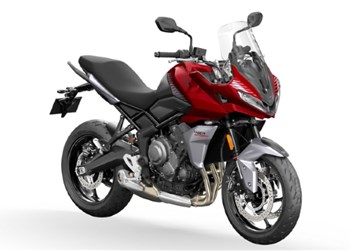 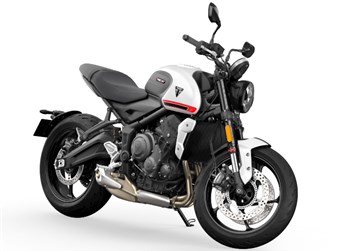