The DBX SUV will use an AMG-sourced twin-turbo V8 that produces 550hp; it will be unveiled later this year in December. 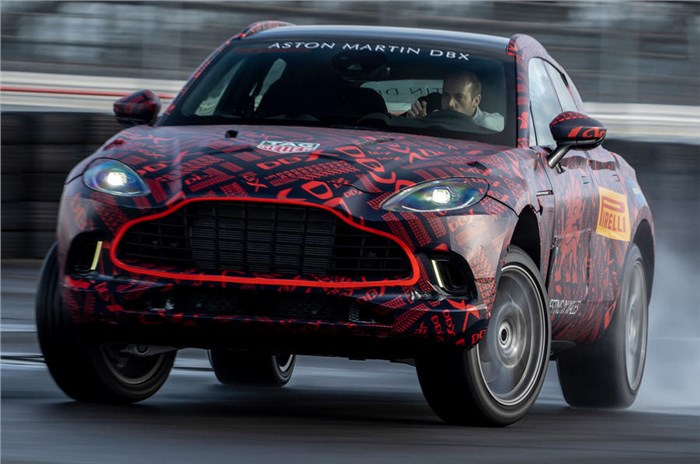 Aston Martin has finally confirmed the launch powertrain of its DBX SUV, ahead of a full unveiling in December.

The Bentley Bentayga rival will be powered by a 4.0-litre twin-turbocharged V8, the same Mercedes-AMG-sourced unit found in the DB11 supercar and Vantage sportscar. However, for the DBX, power has been boosted beyond the 510hp of both of those cars, to 550hp. The highest-performing Aston V8 also makes 700Nm of torque in the DBX, 26Nm more than usual. This news corroborates our previous report.

Aston has yet to reveal the car’s performance stats but says testing has already proven that it can “repeatedly exceed 180mph (290kph)”. Said to have undergone the most comprehensive test regime of any Aston Martin to date, the DBX is also claimed to have “regularly achieved” sub-8min lap times of the Nürburgring Nordschleife, as well as cornering speeds on par with the Vantage and, amazingly, braking figures greater than the DBS Superleggera flagship.

An acoustic team has tuned the exhaust to deliver “deep bass with increasing mid-tones”, according to Aston. Chief engineer Matt Becker said: “We have concentrated our work to ensure that the calibration and tune of this 4.0-litre twin-turbo V8 delivers both, the everyday usability and refinement expected by SUV owners. However, we have also focused heavily on matching that with engaging dynamics.”

Alongside the V8, Aston is also expected to furnish the DBX with a twin-turbo V12 later in its life cycle, to create a more potent range-topper. There will be a hybrid version early in the next decade, too.

Once the Aston Martin DBX launches in the international markets, it will compete with the likes of the Lamborghini Urus, Bentley Bentayga, Rolls-Royce Cullinan and the upcoming Ferrari SUV.