By pricing the MG Hector between the Hyundai Creta and Tata Harrier, Morris Garages has ensured potential buyers of both established SUVs will now give the newcomer a long, hard look. 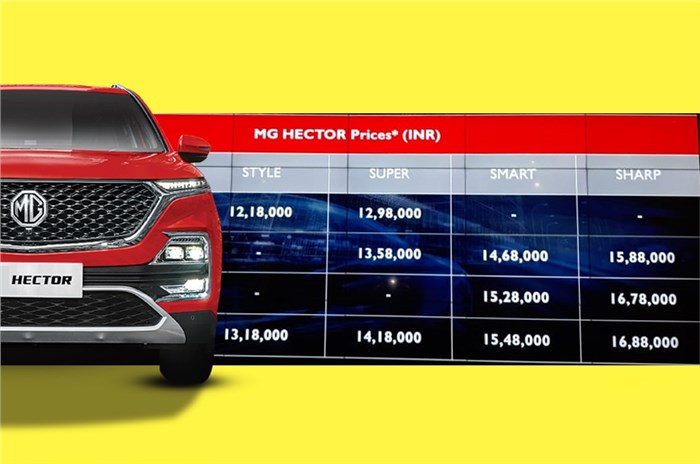 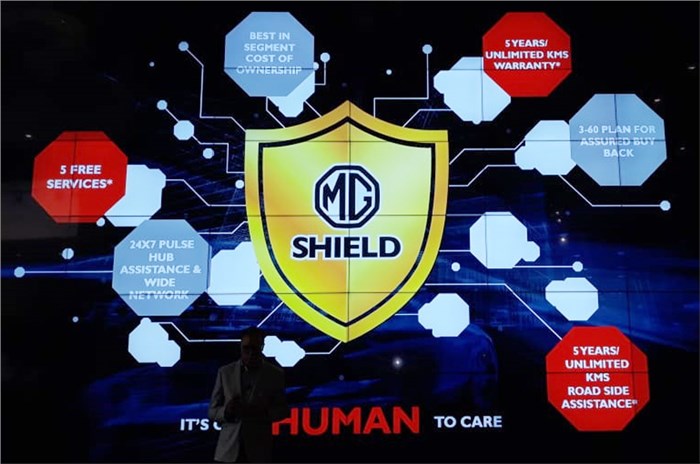 After months of hype and promotional activity, the long-drawn-out market launch of the MG Hector has finally taken place. On paper, MG’s first model for India has a lot going for it, but how well it would be received depended on the pricing. Knowing this key fact, MG has priced the Hector between Rs 12.18-16.88 lakh (ex-showroom, pan-India). Viewed in isolation, the prices seem impressive enough, but it’s only when you line up the Hector on the price graph against other midsize SUVs that you’ll see how cleverly it’s positioned.

To keep things fair and square, we’ll only look at the two-wheel-drive versions of each of the Hector’s rivals, and yes, the Hyundai Creta – which is a size smaller than the other SUVs here – is also part of this story, but the diesel version we’ll take into consideration is the 1.6-litre model, and not the 1.4.

At Rs 12.18 lakh, the base Style variant of the Hector petrol costs Rs 2.18 lakh more than the base E variant of the Creta petrol, but presents a significantly lower entry point to Hector ownership than the Jeep Compass petrol (which starts at Rs 15.60 lakh), Mahindra XUV500 petrol (only available in G AT form for Rs 16.09 lakh), and the Tata Harrier, which doesn’t have a petrol engine option.

Even the diesel Style variant of the Hector, which is priced at Rs 13.18 lakh, costs only Rs 18,000 more than the base Harrier, which doesn’t score high on features. What it also undercuts is the Creta SX MT, which has a higher sticker price (Rs 13.60 lakh) but packs in more features such as a reverse camera, alloy wheels and more. That said, the Hector Style diesel is priced significantly lower than the entry-level Jeep Compass Sport – undercutting it by close to Rs 3.5 lakh. Yes, it is more expensive than the base XUV500, but the W3 variant is almost bare-bones in terms of spec. And in terms of equipment, the Hector Style packs a decent amount of kit – it gets an audio system with four speakers, rear disc brakes, two airbags, ABS, rear parking sensors and a reclining second row, among other things. For those wanting a big vehicle, even the base version of the Hector will be a lot of SUV for the money.

Those seeking some more features will be drawn in by the Super variant. It sits just above the base Style and packs in a massive 10.4-inch portrait-oriented touchscreen infotainment system with Android Auto and Apple CarPlay, reverse camera, front parking sensors, LED head- and tail-lights, alloy wheels, cruise control, and steering-mounted audio controls. What’s more, the petrol Super costs only Rs 80,000 more than the Style (Rs 1 lakh more in the case of the diesel Super). At its price point, the Hector Super diesel is almost on level terms with the Creta SX dual-tone and XUV500 W7, and only costs Rs 12,000 more than the Harrier XM.

The variant that could end up being the most popular is Smart. The diesel-engined Hector Smart only costs Rs 12,000 more than the Creta 1.6 SX (O) and Rs 22,000 more than the Harrier XT, but undercuts the XUV500 W9 by Rs 40,000. With the Smart variant, you get most of the goodies, including four airbags, a tyre pressure monitor, iSmart connected car tech powered by an Airtel e-SIM, leather seats, six-way power-adjustable driver’s seat, push-start button, power-folding ORVMs and an eight-speaker Infinity audio system.

At Rs 16.88 lakh, the range-topping MG Hector Sharp diesel costs a full Rs 1.23 lakh more than the Creta SX (O) Executive and Rs 32,000 more than the Harrier XZ, but still manages to undercut the XUV500 W11 (O) by Rs 52,000. What it brings to the table for Rs 1.4 lakh more than the Smart diesel is automatic climate control, a massive dual-pane panoramic sunroof (the largest in the segment) with remote open-close function, six airbags, 360-degree surround view camera, a 7.0-inch colour MID, ambient lighting, auto headlights and wipers, and segment-firsts in the form of heated ORVMs, a four-way power-adjustable co-driver’s seat and powered tailgate. The Hector is also the only SUV in its class to also be available as a 48V mild-hybrid variant.

It’s worth mentioning that there are some features exclusive to its rivals – the Harrier is the only one to get drive modes, the XUV500 is the only SUV to offer a seven-seat option and the Creta packs in cooled seats and wireless smartphone charging, none of which are available on the Hector.

One thing’s clear - price-wise, the MG Hector sits bang in the middle of the midsize SUV segment. It’s positioned higher than the all-conquering Creta (but only slightly), the diesel Hector is priced within Rs 12,000-32,000 of the corresponding Harrier variant and notably lower than the aging XUV500. The price gap between the Hector and Compass is vast – the top-spec Hector Sharp petrol AT undercuts the Compass Limited Plus petrol AT by Rs 4.45 lakh, and the same Hector variant with a diesel engine undercuts the Compass Limited Plus diesel by a whopping Rs 4.89 lakh. 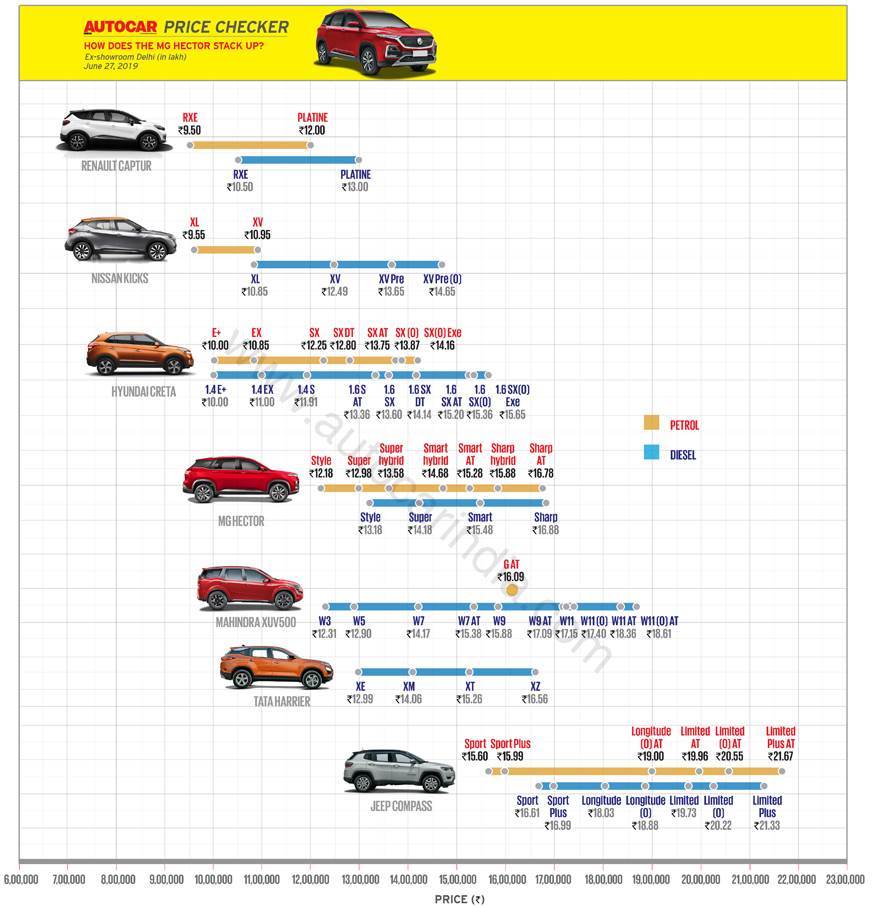 Of course, it’s important to remember that these prices – in the words of MG president and MD Rajeev Chaba – are “very introductory”, and even after they go up, they will see another upward revision when the engines are upgraded to BS6-spec. However, MG has hit the right note with the audience as far as the pricing is concerned, and to assuage any fears prospective buyers may have, has also rolled out a comprehensive warranty and roadside assistance plan (5 years/unlimited km), along with maintenance packages at fixed charges, which should help do away with doubts about the Hector’s long-term reliability and inspire confidence in buyers. The keen pricing is also likely to force Kia to rethink the pricing strategy for the Seltos, which will soon join the midsize SUV fray.

As it stands, MG seems to have found the sweet spot with the Hector’s price; a price point where it’s a bigger, more feature-rich SUV that’s within reach for potential Creta buyers, and a clear value-for-money alternative to the like-sized Harrier and XUV500.