The seven-seater crossover has a claimed range of around 482km; set to arrive in 2020. 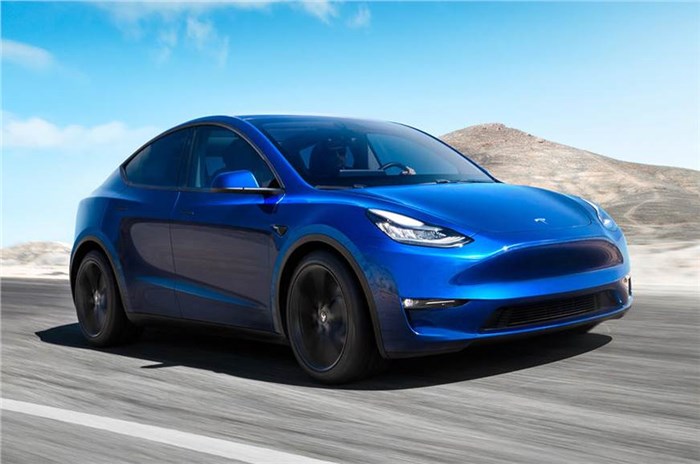 Tesla’s fourth mainstream model, the Model Y, was unveiled at its Los Angeles design centre by CEO Elon Musk, who confirmed the crossover EV would be capable of around 480km of range in its highest specification.

The Model Y takes design cues from both the Model 3 sedan and Model X SUV, with a glass panoramic roof and optional seven-seat layout. It does not retain the gull-wing doors found on the more expensive Model X, instead using pillarless doors like the Model 3 and Model S. The crossover is around 10 percent larger than the Model 3, with which it shares a platform and as much as 75 percent of components. Musk said the Model Y had “the functionality of an SUV, but rides like a sports car,” with a low centre of gravity and a 0.23 drag coefficient.

The Model Y is compatible with Tesla’s third-generation Superchargers, capable of 250kW charging. Cars will be able to recover 120km of range in 5min, and charge at rates of up to 1,609kph. Tesla now has more than 12,000 Superchargers globally across 36 countries.

Inside, the Model Y has a similar interior layout to the Model 3, with a single 15.0-inch touchscreen interface containing all of the car’s controls, and no traditional instrument cluster. It will also include the same self-driving hardware – including Autopilot, which can be unlocked for a fee and upgraded over-the-air as new features get approval from regulatory bodies.

Split-folding second-row seats and a front boot provide a maximum storage of more than 1,800 litres. A rear hatchback would prove more convenient for loading than the Model 3's tailgate.

Tesla has yet to confirm where the Model Y will be produced, with latest reports suggesting it could be built at the company’s Gigafactory in Reno, Nevada. Model 3 production is said to remain at the company’s Fremont California manufacturing plant. Chinese cars are expected to be built in Tesla’s Shanghai factory, which is still under construction and projected to be completed by the end of 2019.

The Model Y will likely prove pivotal to Tesla, as the worldwide demand for SUVs is significantly higher than it is for sedans. Musk predicted Tesla would go on to sell more Model Ys than the total Model S, X and 3 units combined. The company opened pre-orders for the car after its reveal, at a USD 2,500 (Rs 1.73 lakh) deposit. Model Y cars with seven seats won't be available until 2021.

The company also faces new challenges from European carmakers including Audi, BMW and Mercedes-Benz, which are gearing up to launch their own premium SUVs. Similarly-priced rivals – like the Kia e-Niro and Hyundai Kona Electric – offer less range. Tesla recently announced a move to online-only sales and plans to close its physical stores, but reversed its decision following customer and employee backlash.

The announcement of the Model Y arrives soon after Tesla’s entry-level Standard Model 3 went on sale in the US at  USD 35,000 (Rs 24.24 lakh), and the first left-hand-drive versions of the more expensive Model 3 Performance arrived in Europe.

The company will be hoping to avoid the manufacturing issues that plagued the Model 3, which bottlenecked production for months following the car’s North American launch. Tesla has since recovered from these early setbacks and is on course to achieve its factory target of 10,000 Model 3 cars per week. It is now the world’s top-selling electric car, having sold more than 1,20,000 examples in the last year. Tesla aims to produce 2,000 Model Y cars per week by September 2020.

With the Model Y now revealed, Tesla’s remaining projects include a Semi lorry, pick-up truck and a new Roadster – the latter of which is due to arrive on roads in 2020.