The five-seat Tata Harrier is available with a single engine-gearbox combination and in a total of four variants; rivals the Jeep Compass and Hyundai Creta. 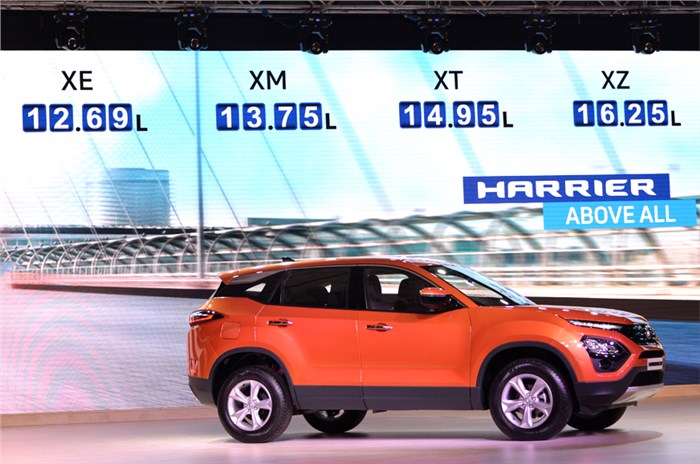 After months of teasing and previewing what is possibly the most eagerly awaited new car in a while, Tata Motors has finally launched the Harrier SUV today, at a starting price of Rs 12.69 lakh (ex-showroom, Mumbai). The five-seat SUV is available in four variants – following the base Harrier XE are the mid-spec XM (Rs 13.75 lakh), XT (Rs 14.95 lakh) and the range-topping XZ (Rs 16.25 lakh). Pricing is very aggressive and with prices closer to the Hyundai Creta than the Jeep Compass.

In terms of styling, the Harrier’s design is quite similar to that of the H5X concept showcased at the 2018 Auto Expo. The Harrier is based on Tata’s Omega Arc platform, which is derived from Land Rover’s D8 platform that underpins the Discovery Sport. Thanks to this, the new Tata SUV is larger than its rivals in terms of dimensions. It measures 4,598mm in length, 1,894mm in width, 1,706mm in height and has a 2,741mm-long wheelbase. Ground clearance is pegged at 205mm. The Harrier has a 425-litre boot and a fuel tank capacity of 50 litres.

Powering the Harrier is a Fiat-sourced 2.0-litre diesel engine that produces 140hp and 350Nm of torque. The engine is mated to a 6-speed manual gearbox that transfers the power to the front wheels. A Hyundai-sourced automatic gearbox and a petrol engine will join the line-up at a later stage. Although Tata will not offer the Harrier with four-wheel drive, the SUV does get multiple off-road modes that can be selected via a circular knob on the centre console.

Bookings for the Harrier have been open for the last couple of months, and deliveries are set to begin later this month. Due to its pricing, the Tata Harrier rivals a wide range of SUVs in the Indian market, including the Hyundai Creta, Jeep Compass and Mahindra XUV500. 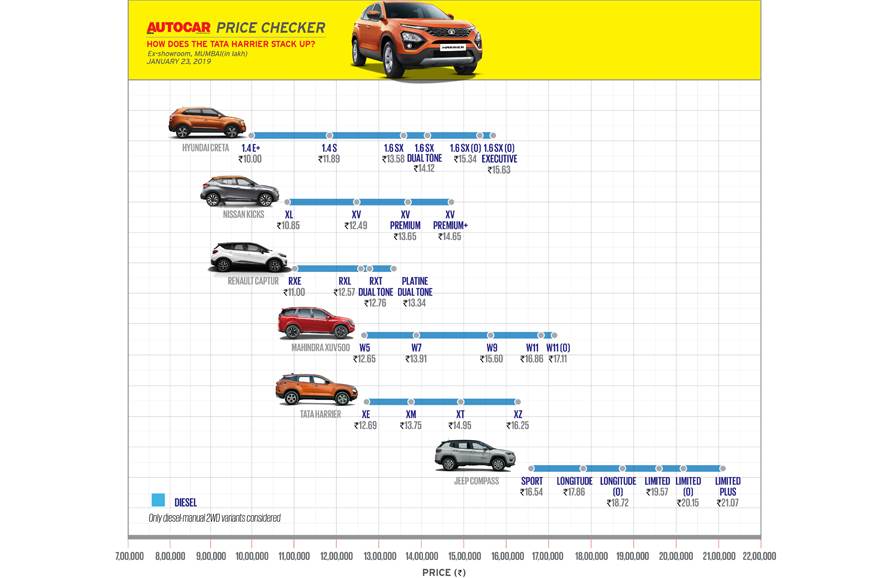 Here's how the Tata Harrier stacks up against its rivals on price.

What do you think of the Harrier’s pricing – would you pick it over other SUVs in this segment?