Unlike the current Ertiga, the new model’s higher-spec ZXi trim will also get an automatic gearbox; both engine options to come in four trim levels. 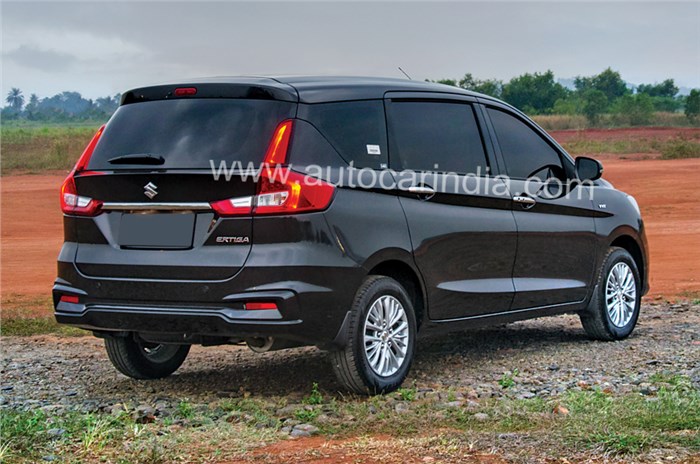 More details of Maruti Suzuki’s next-generation Ertiga MPV have been revealed. The new model will have a 4-speed automatic transmission on the 105hp, 1.5-litre petrol engine, which will, for the first time, come with two trim levels. Unlike the current Ertiga on sale, the next-gen MPV will have the automatic transmission on the higher-spec ZXi trim as well as the mid-spec VXi variant. The older Ertiga only had the torque convertor automatic on the mid-spec trim.

The new MPV will be available in a total of 10 options – four petrol-manuals (LXi, VXi, ZXi and ZXi+), two petrol-automatics (VXi and ZXi) and four diesel-manuals (LDi, VDi, ZDi and ZDi+). Compared to the outgoing Ertiga, Maruti Suzuki will not offer the LXi (O) and LDi (O) variants on the new model.

Information released by Maruti Suzuki mentions that the new Ertiga comes with projector headlamps. This means that unlike the recently launched Swift, Dzire and Ciaz, it is not expected to get LED projectors with daytime running lamps. The tail-lamps have LED inserts though. This cost cutting indicates that the MPV will have an agressive price point or it could mean that the Zxi+/Zdi+ will be priced at a significant premium over the Zxi/Zdi variants as the addition of LED projectors will increase the price to quite a high level. Cost cutting measures can be seen on the wheels as well. While all of Maruti Suzuki's recent launches get diamond cut alloys on the top-spec trim, the new Ertiga is expected with standard alloys even in the Z+ variants.

As we had revealed earlier, the petrol Ertiga shares its dual-battery setup with the Ciaz facelift, where a lead acid unit runs the start-stop function and a lithium-ion unit runs the torque assist function. Its 1.5-litre, four-cylinder petrol motor makes 105hp and 138Nm of peak torque. The 90hp, 1.3-litre diesel engine continues unchanged from the current-gen Ertiga. Both engines get a 5-speed manual as standard, with only the petrol having the option of an automatic.

The new Ertiga is also more spacious than the outgoing model, particularly in terms of boot space. The older model had a 185-litre boot (with all three rows up) while the next-gen Ertiga boats of 24 litres more. Luggage carrying capacity increases to 550 litres with the third row folded, and expands to 803 litres with the second row folded.

Maruti Suzuki will reveal prices for the new Ertiga on November 21, though bookings for the model have already begun. The MPV will be retailed from the brand’s Arena outlets, contrary to speculation that said it might be sold through the premium Nexa showrooms. When it arrives, the new Ertiga will compete with the Mahindra Marazzo.