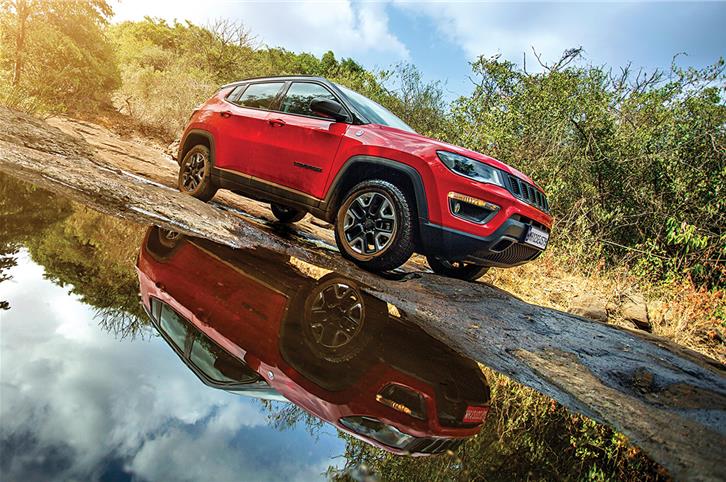 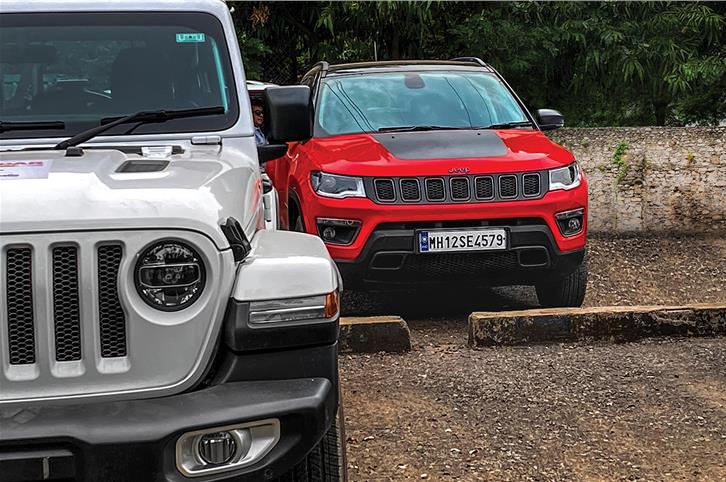 With the iconic Wrangler, from where it gets a lot of its DNA.

The more off-road focused Compass Trailhawk works extremely well in all environments; partly why we will miss it so much.

As I lie awake in bed, I think about all the trips I didn’t manage to do with the Trailhawk. Drives down jun   gle paths that run along the spine of the Western Ghats, trips to the magical Rann of Kutch in Gujarat and shorter excursions over some not-so-well-maintained coastal roads, south of Mumbai. ‘Expand your horizons’, the much-overused cliché goes, and the Trailhawk does exactly that. Gone too soon from our long-term fleet, I know I’ll miss the Trailhawk’s somewhat unique on/off-road capabilities. I’ll miss its robust build, its trekking boot-like rugged construction, its attractive profile with the matte-black detailing and above all, its innate ability to carry passengers at speed and in comfort, over just about any terrain.

Truly a multi-role, multi-dimensional SUV, it seems to do a good job in almost every driving environment – city, highway or off-road. This is no exaggeration. My daily driver in Mumbai, the Trailhawk may be a slightly more hardcore version of the regular Compass, but it is also an SUV that actually works well in the cut and thrust of everyday traffic. The ride on the more pliant rubber, for one, is stellar. More absorbent over broken tarmac, more silent and more in control over large bumps, this is the best-riding SUV in its class by a country mile. And this is at all speeds – low, medium or high. I can’t remember a big crater or a dip really having affected its composure. Ever. 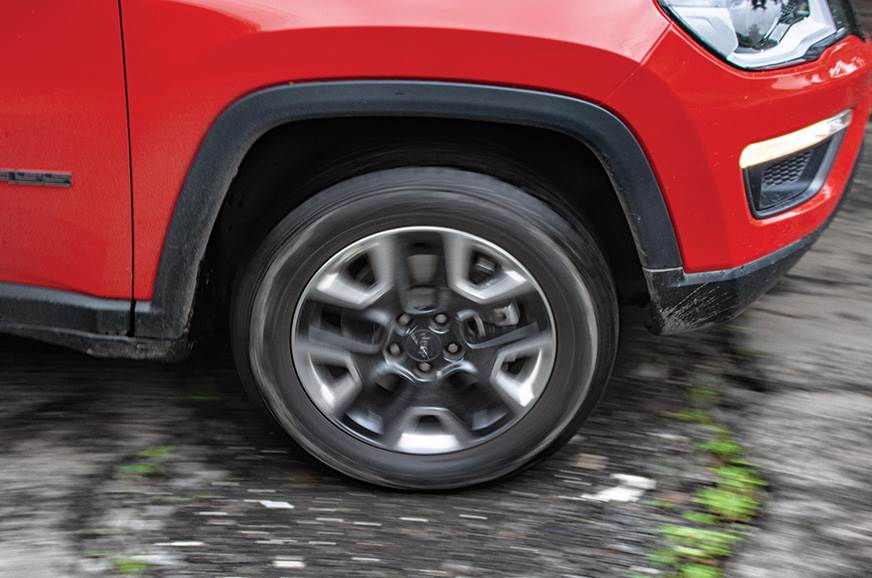 Near-Perfect Balance: The ride is silent and very absorbent, and it handles well too.

What made the city drive even more comfy is that the steering on this version is also lighter at lower speeds, and all the better for it. It’s still bristling with feel as speeds rise and has plenty of heft, the brakes are reasonably weighted for stop, start, stop again traffic, and even cabin insulation is about the best around.

What also makes the everyday city drive feel effortless is the grunt of the big 173hp diesel. One of the first BS6 diesels, it’s clearly smoother, less clattery and less spiky than the BS4 version. And while the sharp step up of turbo boost may be missing, it still has plenty of oomph in the bottom end, and loads and loads of grunt in the mid range. The engine does get a bit gruff when pulled hard and it isn’t all that responsive even at high speeds, but the mid range is so strong, you are happy to upshift. 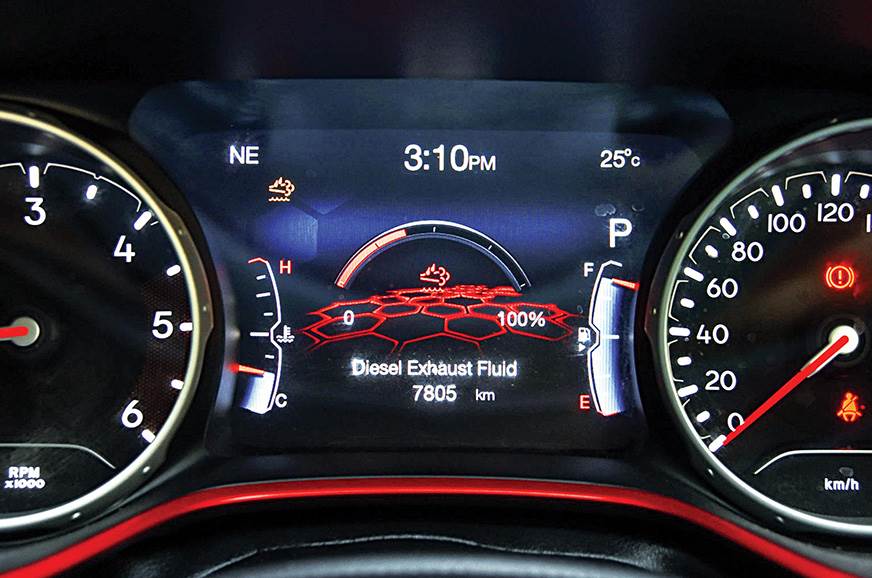 Cry Wolf: AdBlue additive warning pops up too early to be really useful.

The BS6 motor does need to be fed a diet of AdBlue for emission control every 10,000 or so kilometres, and this means you have to top up the tank for it with the white chalky liquid. Though the liquid isn’t available freely at all pumps yet, this isn’t the only problem. What is, is that the warning system pops up on the instrument panel even when you have roughly 45 percent in the tank, at around 7,000km. The cry-wolf system, in fact, warns you so early, you almost ignore it until it’s too late.

What lets the side down even more is the 9-speed automatic gearbox. Slow to react and sleepy, it puts a spanner in the works if you are in a hurry. This often frustrates, especially when you want to enjoy the Compass on a nice open road, and then using the also-slow-to-react manual mode is only of limited help. I can think of multiple times when I had to dial it all back only because of the gearbox. 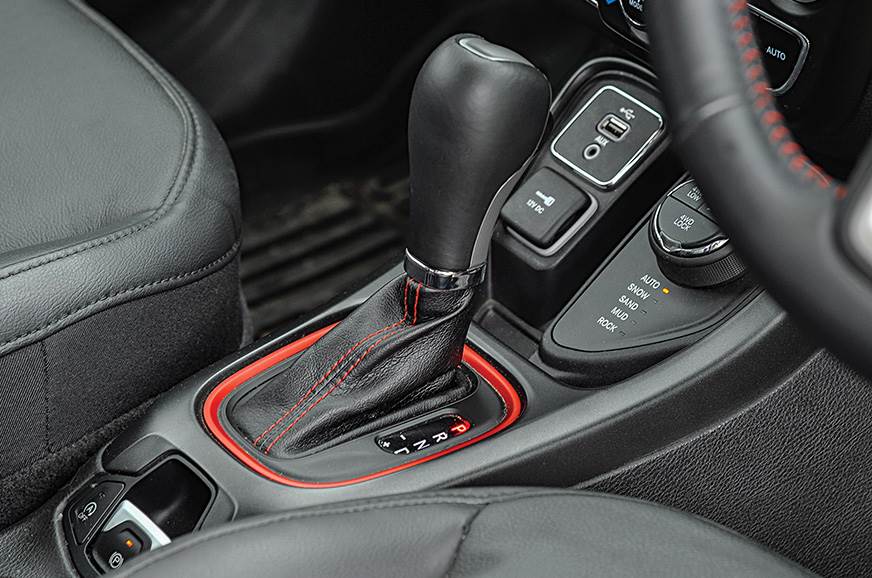 Chill Box: Sleepy responses of the automatic are a constant source of irritation.

The Trailhawk’s cabin, however, is a very pleasant place to spend time in. It isn’t showy or flashy, and some features like wireless charging and cooled seats are missing. But it’s also built to last, made of robust bits, and the new touchscreen is also a big improvement. The seats, both at the front and rear, are also superbly put together and keep you fresh and comfortable even after long drives.

Ahh, long drives, is there a better, more confident SUV at high speeds? The Trailhawk is around 25mm higher, and so a bit softer around the edges, in comparison to the regular Compass, and this shows up at high speeds. Despite that, the Jeep displays plenty of confidence and poise. The Trailhawk turns into corners positively and since eighth and ninth gears are extremely tall, they allow you to sort of ‘super-cruise’, with the engine spinning slowly, despite the relatively high road speed. 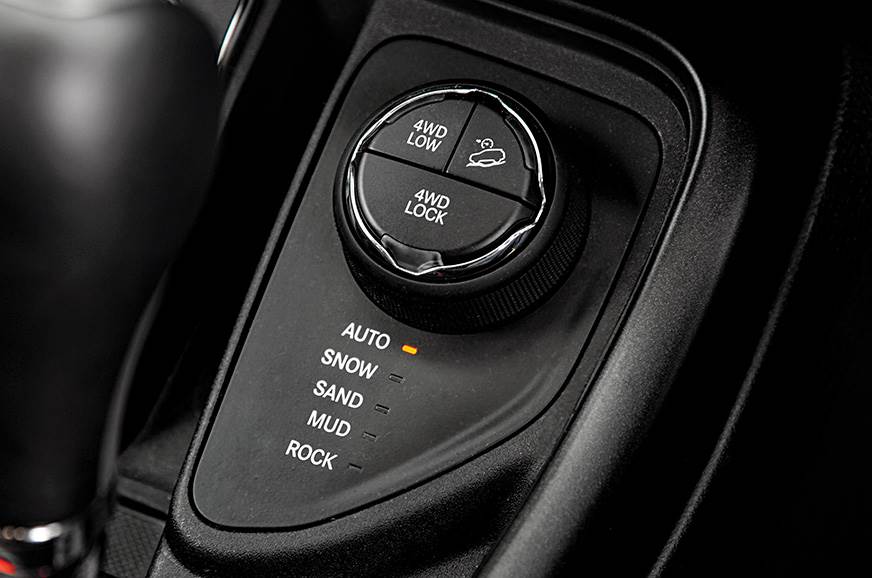 Real Off-road Modes: Help maximise traction so you can focus on driving best.

Unlike any of its rivals, the Trailhawk can also actually manage more than a bit of off-roading. That little bit of extra ground clearance and the more off-road centric tyres make a small but significant difference. And then there’s the off-road dial (with one extra mode, ‘Rocks’) that also allows you to choose Snow, Sand or Mud. With the ESP turned off and engine responses much improved, it actually does work a treat in sand.

We had only one problem with the Compass; but it was a bit of a serious one. It refused to start when the car was in Mahabaleshwar. And that meant we needed to call for backup from Jeep. The battery was replaced temporarily, but it did knock our confidence in the car a bit.

Yes, at Rs 26.8 lakh, the Trailhawk is more expensive than the regular Compass by around Rs 2.6 lakh, it isn’t as feature-rich as some of its more affordable two-wheel-drive-only rivals and the 9-speed gearbox is a bit slow, but would I rather have any of the competition instead? Absolutely not.