The Royal Enfield cruiser will likely be positioned above the Interceptor and Continental GT. 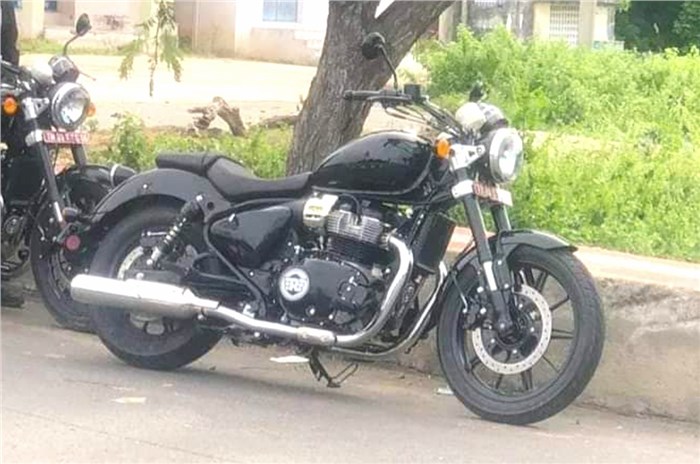 Royal Enfield’s upcoming twin-cylinder cruiser has been on test once again. Unlike the older images, this one reveals the front of the motorcycle.

The new image reveals that the bike indeed appears to be using Royal Enfield’s 650cc parallel-twin engine. While the older spy images did give us a peak, the new shot shows the engine fully, along with the oil-cooler. However, it isn’t identical and the casings on it are finished in black as opposed to polished aluminium on the other RE 650s.

The blacked-out theme is carried forward in other places as well. Components like the fork legs, rear shock absorbers, levers, mirrors and more are finished in black. Royal Enfield is using a completely different frame for this bike. The metal tubing along the side is completely different and the twin rear shocks are mounted at more of an angle compared to the Interceptor 650 and Continental GT 650.

The whole bike appears to be long and low, and while we can’t be sure, it looks like the front wheel is bigger than the rear – a trick commonly used by big cruisers to create a strong stance.

The bike also has a feet-forward position, which should help move the feet away from the hot engine cases. The image also gives a glimpse of the instrument gauges and it looks like this bike gets a large circular dial flanked by a smaller one on the right.

We expect to see this bike go on sale sometime next year, and it looks like we’ve got another exciting Royal Enfield product to look forward to. In terms of competition, it’ll take on the recently launched BS6 Kawasaki Vulcan S.

Upcoming Royal Enfield models: What we know so far