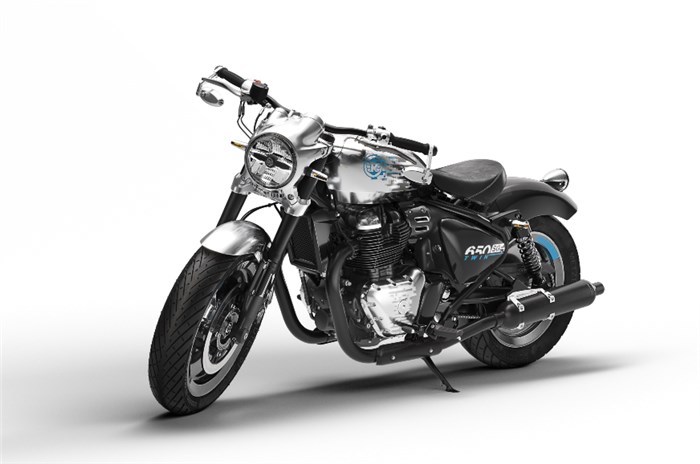 Royal Enfield has taken the wraps off the SG650 concept motorcycle at EICMA 2021. The concept previews the new 650cc cruiser that is set to launch in a few months.

The SG650 concept, says Royal Enfield, is a mix of the company’s classic design and what their bikes in the future will look like. The concept machine looks striking in its brushed aluminium and black colourway, with an interesting digital graphics scheme. Viewed head on, you see a round headlight with integrated position lights. A rather cool-looking cowl surrounds the headlight and extends at the top to cover the instrument cluster. Move to the side and you’ll notice a chunky fuel tank with the RE logo in blue. The tank and rims have been CNC billet machined from a solid block of aluminium. The tail section, with the chopped fender, is another attractive design element and so are the fat Metzeler tyres.

While the SG650’s bodywork is all concept, the frame, USD fork, rear shock absorbers, foot pegs and switchgear seem like production spec. These may make it on the upcoming 650cc cruiser. A few test mules that have been spotted in the past seem to be running similar equipment.

The engine you see here is the same parallel-twin unit as in the Interceptor 650 and Continental GT 650. For reference, this engine makes 47hp and 52Nm of torque.