To be launched next month, the Interceptor and Continental GT 650 are powered by 648cc 47hp parallel-twin engine. 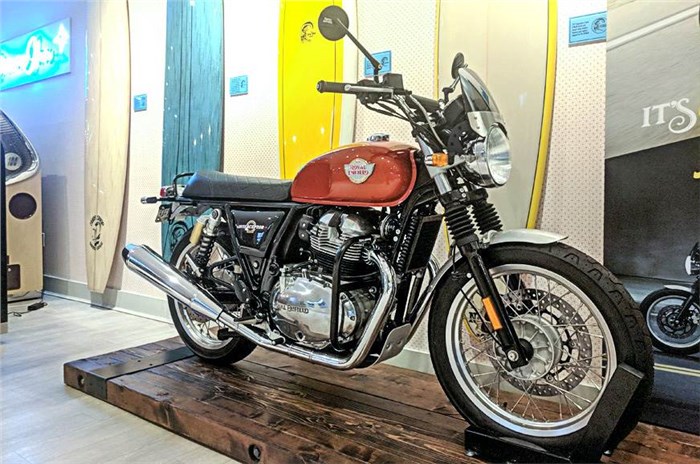 Royal Enfield dealers have begun accepting bookings for the Interceptor 650 and the Continental GT 650. Both bikes are likely to launch sometime next month. Sources tell us that the manufacturer is aiming at an aggressive pricing with the range likely to start under Rs 3 lakh.

The Royal Enfield Interceptor 650 and Continental GT 650 are powered by a 648cc, air-cooled, SOHC, fuel-injected parallel-twin motor which produces 47hp at 7,250rpm and 52Nm of torque at 5,250rpm. The motor is paired to a 6-speed gearbox with a slip-assist clutch.

Both bikes are equipped with a conventional telescopic fork and gas-charged twin shock absorbers. Braking is taken care of by a single 320mm disc up-front and a smaller, 240mm disc at the rear with dual-channel ABS as standard. Both models share the same wheel and tyre sizes (100/90-18 at the front and 130/70-18 at the back). The bikes also have a claimed top speed of over 160kph. The Interceptor 650 gets a 13.7-litre fuel tank while the Continental GT gets a slightly smaller 12.5-litre capacity.

A few dealers we spoke to are promising deliveries in mid-December. Booking amount is set at Rs 5,000.