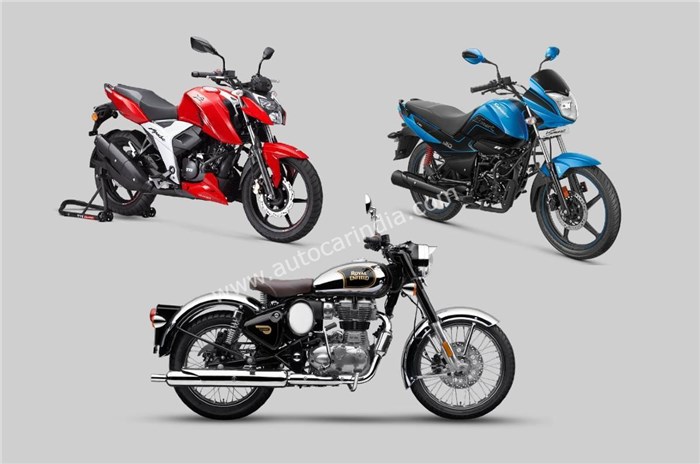 With lockdown restrictions easing across India and the vaccination drive gaining traction, two-wheeler sales have shown signs of picking up on a monthly basis.

While cumulative sales numbers from six leading OEMs – 12,71,455 units, indicate a 6 percent increase month-on-month, it declined 15 percent year-on-year. Semiconductor shortages is one of the major concerns in terms of delaying production schedules and reflects an industry-wide trend including passenger vehicles and commercial vehicles.

Motorcycles accounted for nearly 90 percent of sales and Splendor, HF Deluxe, Passion and Glamour are amongst the top selling bikes. Keen on increasing the share of exports, Hero MotoCorp further augmented its premium motorcycle portfolio in Bangladesh with the launch of the Hero Hunk 150R in August. The company exported a total of 22,742 units last month.

The bike maker is hopeful of a revival in the upcoming festive season on the back of a reasonably good monsoon, vaccination drive gaining pace and last mile retail picking up. As a result, it expects that consumers will spend more in the festive season, that is set to kick off in few weeks. 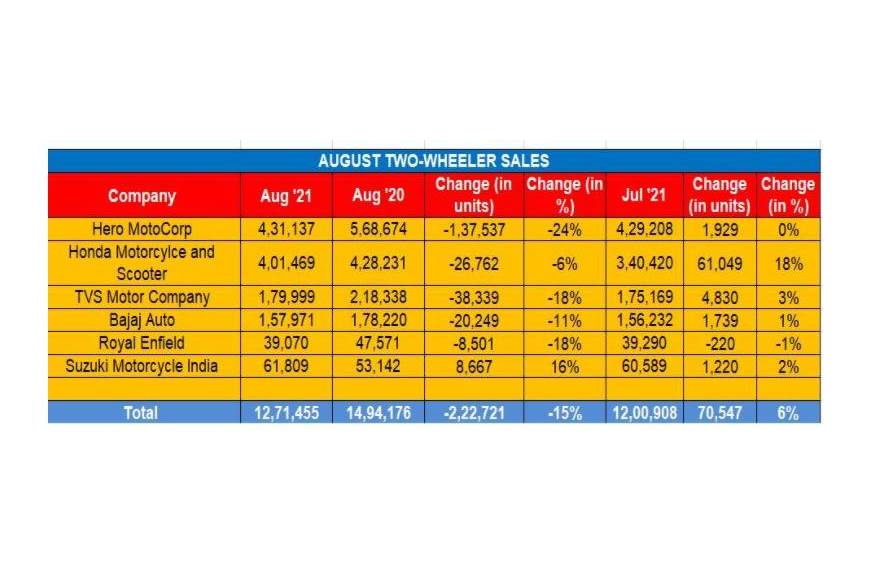 Guleria added that the bike-maker will start deliveries of the recently unveiled CB200X motorcycle in September. However, the semiconductor shortage and rising cost of raw materials continue to be a key overhang for the two-wheeler manufacturer.

TVS Motor’s August sales declined 18 percent to 1,79,999 units year-on-year as against 2,18,338 units in August 2020. TVS however posted a 3 percent growth month-on-month when compared to 1,75,169 units sold in July 2021. The company said that the production and sales of premium two-wheelers were severely affected due to the shortage of semiconductors. The company launched its ‘Built to Order’ (BTO) platform, marking its foray into the factory customisation and personalisation segment. This platform will debut with its flagship motorcycle, the Apache RR 310, and will be introduced across other products in a phased manner.

Royal Enfield’s sales also declined 18 percent to 39,070 motorcycles in August as against 47,571 units in August 2020. Exports too grew to 6,790 bikes in August but compared to July, its sales were a tad lower (July 2021: 39,290 units). The company kicked off September with the launch of 2021 Model Year Classic 350 which gets a fair number of changes. While the styling takes cues from RE’s vintage G2 model, the big changes are on the powerplant front.

Satoshi Uchida, Managing Director, Suzuki Motorcycle India said, “The customer sentiment is improving day by day which is positive news for the industry.”

The August automobile sales reflect the impact of semiconductor shortages and indicates that high fuel inflation and escalating cost of ownership continue to weigh in on sentiment. Though the chip shortage is expected to extend into next year, manufacturers are betting big on demand arising from a satisfactory monsoon, healthy pace of vaccination and hence, expect a volume recovery in the forthcoming festive season.