The upgraded showroom will also have the 390 Adventure, 790 Duke, and Husqvarnas on sale this fiscal. 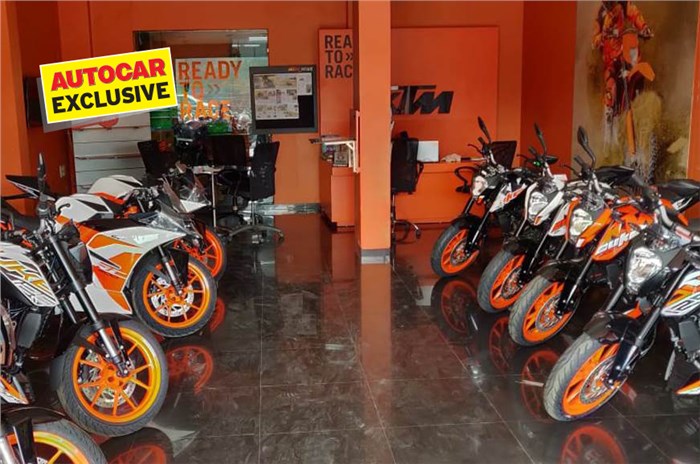 KTM has initiated plans to upgrade its showrooms in India to accommodate its upcoming premium models. The showrooms are set to get larger, more premium and ready to offer a better customer experience. They will get changes to the interior and exterior to accommodate and sell KTM’s upcoming models.

In addition to the current line-up, the redesigned stores will have KTM’s upcoming 790 Duke, 390 Adventure, and Husqvarna’s Svartpilen 401 and Vitpilen 401. While the 790 Duke is already on sale in global markets, it has only been spotted once in India. At present, it is not known how competitively it will be priced in India as we aren’t aware of how heavily it will be localised, if at all. As for the 390 Adventure, it is expected to share a lot of components with the 390 Duke and be manufactured in India as well. Pricing will most certainly be mouthwatering, but higher than that of the 390 Duke. The Husqvarnas, meanwhile, share mechanical components with the KTM 390 Duke as well, powered by the same 373cc, liquid-cooled, single-cylinder motor mated to a 6-speed gearbox. However, both models are expected to be positioned as more premium offerings, with price tags to match.

As a result, all of these models will be priced above KTM India’s current flagship, the 390 Duke, which is why it is no surprise that KTM is redoing its showrooms. Bajaj is also looking to make its KTM showrooms the hotspot of performance bikes in India, offering a wide range of products. We could see them achieve this ambitious goal as the company already has a number of touch points across the country.

However, not all KTM showrooms will get the chance to sell these models, as many of them are quite small at the moment. They will either need to be made bigger or shift into a different space. The redesigned showrooms will feature changes like a different sign board that includes Husqvarna branding, redesigned interiors and more.

It will be interesting to see if the new showrooms and improved customer experience from KTM will be on par with other sports bike companies in India.