The upcoming KTM E-Duke will be powered by a 10kW motor and could share most of its underpinnings with the Husqvarna E-Pilen. 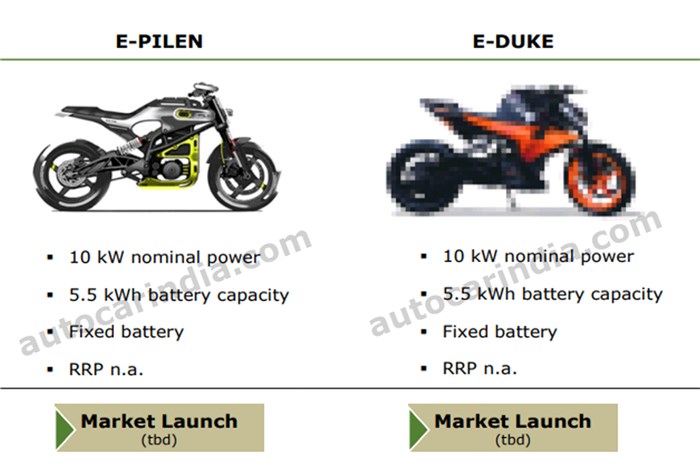 Austrian brand KTM has confirmed that it is working on an electric motorcycle called the E-Duke. It has also revealed that the bike will be powered by a 10kW motor and feature a 5.5kWh battery pack.

For reference, the Tork Kratos R is currently the most powerful electric motorcycle on sale in India and features a 9kW motor. In comparison to petrol power, the E-Duke’s output figures are comparable to the KTM 125 Duke, which produces 11kW (14.5hp), and its performance is likely to be in a similar ballpark as well – the E-Duke will be type-approved in the European A1 class.

The claimed battery capacity of the E-Duke’s fixed battery pack is also class-leading when compared to vehicles like the Tork Kratos R (4kWh), Simple One (4.8kWh) and Ola S1 Pro (3.97kWh). But while some of these offerings are already on the market, the E-Duke is still some time away, with KTM stating that its market launch date is yet to be decided.

A test mule of the E-Duke is yet to be spotted, but that’s not to say that the motorcycle is completely unknown. It is expected to share a lot of its underpinnings with the Husqvarna E-Pilen – a concept bike shown last year which will turn into a production bike of its own.

The E-Pilen sports a signature trellis frame, upside-down fork and offset rear monoshock. While it was earlier showcased as an 8kW model, the company originally mentioned that there would be a power output window from 4kW to 10kW. This latest report states that the E-Pilen will feature the same 10kW motor and 5.5kWh battery pack as the upcoming E-Duke.

Bajaj and KTM have also announced that they are co-developing an electric platform, which will underpin two-wheelers with outputs ranging from 3kW to 10kW. While this agreement is thought to predominantly pertain to e-scooters, it’s not unlikely that the E-Duke could also spawn a Bajaj equivalent. Considering the level of involvement between the two companies, it’s also possible that the E-Duke could be manufactured and sold in India at some point in the future.

As for the highly anticipated KTM 490 models, this latest report has no updates about where or when they will be built.

What are your thoughts on KTM's upcoming all-electric motorcycle? Let us know in the comments below.