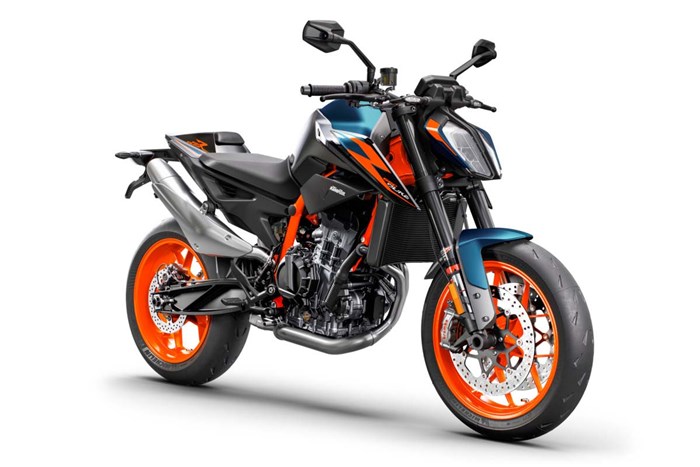 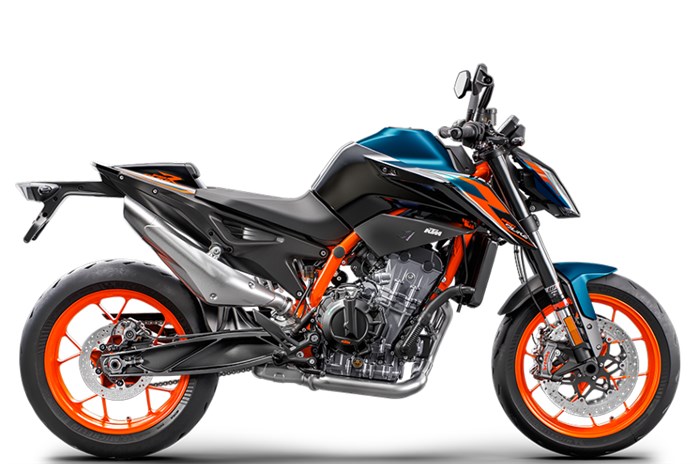 
For the 2022 model year, the 890 Duke R gets a fresh new paint option which is reminiscent of the RC16 motorcycles with which KTM competes in Moto GP. Naturally, this similarity with the RC16’s livery belies the 890 Duke R’s sporty intentions. This new colour is also available on the bigger 1290 Super Duke R. The new matte colour is called Atlantic Blue and contrasts well with the orange frame of the 890 R.
Aside from the new colour scheme, the motorcycle remains unchanged. The 890 Duke R is powered by an 889 cc parallel-twin engine producing 121hp and 99Nm. The engine also features forged pistons, and gets a 6-speed gearbox along with a slipper clutch.
The 890 Duke R uses a frame made out of chromium-molybdenum steel and the subframe is made from cast aluminium. The 890 Duke R comes equipped with WP Apex suspension - a USD fork adjustable for compression and rebound damping and a fully-adjustable monoshock. Ground clearance is 206 mm and seat height is 834 mm.
Braking responsibilities are handled by Brembo Stylema monoblock callipers coupled with 320mm floating discs up front and a 240 mm disk at the rear. The KTM 890 Duke R comes with Michelin Power Cup 2 tyres and also features a Brembo MCS front master cylinder which allows the rider to adjust for lever ratio and brake feel. The 890 Duke R also features three riding modes namely sport, street, and rain. It also gets another riding mode called Ultimate. This Ultimate (track) mode which is an optional extra, allows customization for riders when it comes to throttle control, traction control (9 levels) and wheelie control (switched on or off).
Another member of the 890 family, the KTM 890 Duke GP is also expected to launch on the 22nd of this month. KTM says this new 890 Duke GP will be even more track-focused and is expected to be the flagship of the 890 family of motorcycles.
KTM also offers a host of PowerParts for the bike, including slip-on Akrapovič exhaust systems, different mirrors, stands, and anodised parts for the engine and chassis.
Do you like the 890 R’s new livery and which one of the 890 siblings is your favourite? Let us know in the comments below.