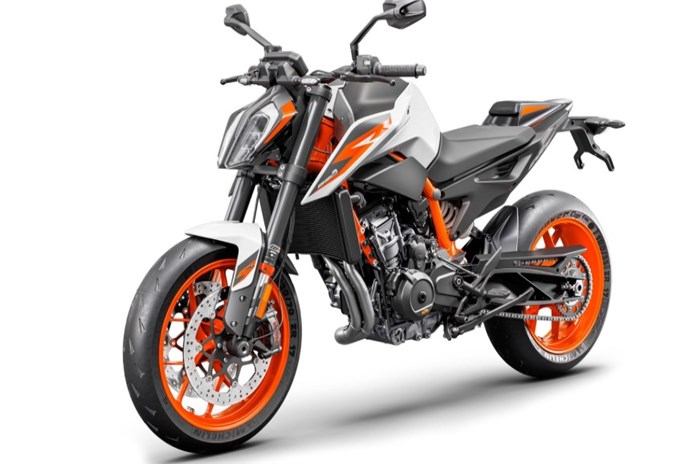 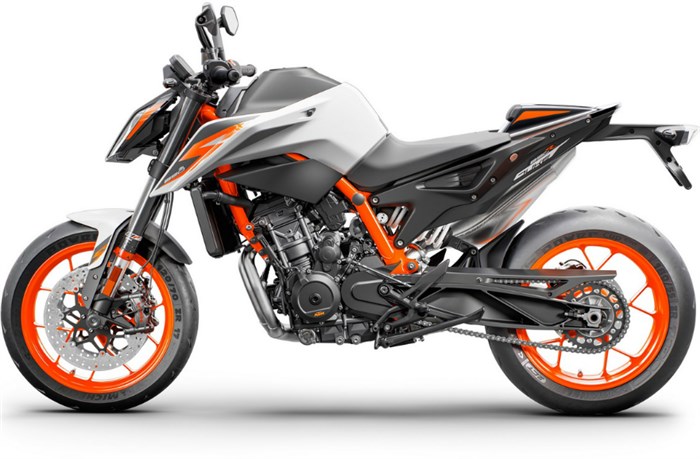 KTM took the wraps off their explosive 2020 Duke range, starting with the new 890 Duke R, the go-faster version of the awesome 790 Duke. The 2020 KTM 890 Duke R brings more power, aggressive ergonomics and adjustable suspension to the table over the already fast and agile 790 Duke. With the 790 Duke already impressing us with its abilities, we are intrigued to know what the 890 Duke R would feel like – and by the looks of it, there are some interesting components to step-up this Duke.

With the bump in engine displacement, the power figures have also gone up with the 890 Duke R’s motor, producing 121hp at 9,250rpm and 99Nm of torque at 7,750rpm (up from the 790’s 105hp at 9,000rpm and 87Nm of torque at 8,000rpm). KTM has incorporated a new cylinder head with larger intake and exhaust valves. The cam profile is aggressive, with increased camshaft lift for stronger performance. Since the engine is spinning at higher RPMs, a new balancer shaft has been added to reduce vibrations. The motor is paired to a 6-speed gearbox with reverse race-shift feature, so you’ll have to push the lever down to upshift, just like MotoGP machines.

Complementing the new engine are new components, such as lighter wheels and brakes that have helped reduce unsprung mass by approximately 3.5kg. This not only makes the 2020 890 Duke R lighter, but also makes it change direction quicker than the already sharp-steering 790 Duke. Besides its lighter components, KTM has also stiffened the clamps to go with the 890’s sporty handling. Also, an aluminium steering stem replaces the steel unit in the 790, further reducing weight.

The new 890 Duke features a fully-adjustable WP Apex front fork, with split-function damping and an adjustable monoshock at the rear with a hydraulic preload adjuster. This is one of the biggest advantages that the 890 Duke R has over its smaller sibling as adjustable suspension allows the rider to fine tune the bike based on the terrain.

The electronics is as advanced as on the 790 Duke with IMU-assisted nine-level traction control, wheelie control, ABS and riding modes. The anti-wheelie and ABS modes are displayed on the 890 Duke’s TFT screen. An up and down quickshifter is optional.

Since this is an R model, KTM has also tweaked the riding position with a lower, flatter and slightly forward handlebar. In addition, the reach can be adjusted by three rotational adjustments and four positions of the triple clamp. You also sit higher on the 890 Duke, with the seat set 840mm off the ground. KTM says that this results in an aggressive riding position which is also aided by the new higher and rear-set foot pegs for greater cornering clearance and steeper lean angles. There's also a set of new Michelin Hypersport II tyres for

Finally, the styling is pretty much the same as on the 790, save for the new paint work and graphics and the orange-coloured frame.

While the KTM 790 Duke has just gone on sale in India, the chances of KTM launching the 890 Duke R in India are unclear, for now. That being said, the 2020 890 Duke R rivals the India-bound 2020 Triumph Street Triple RS and it’ll be interesting how these two stack up in a comparison test. Watch this space to find out.