We get our first taste of the KTM 790 Duke at Bajaj’s test track in Chakan and it turns out to be an absolute thriller. 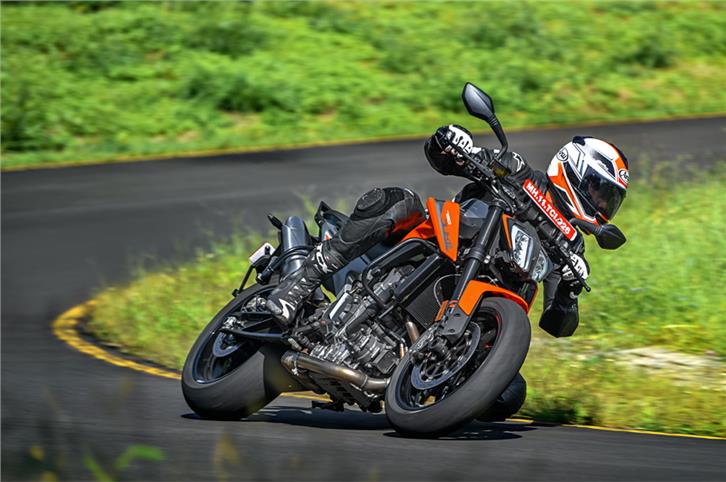 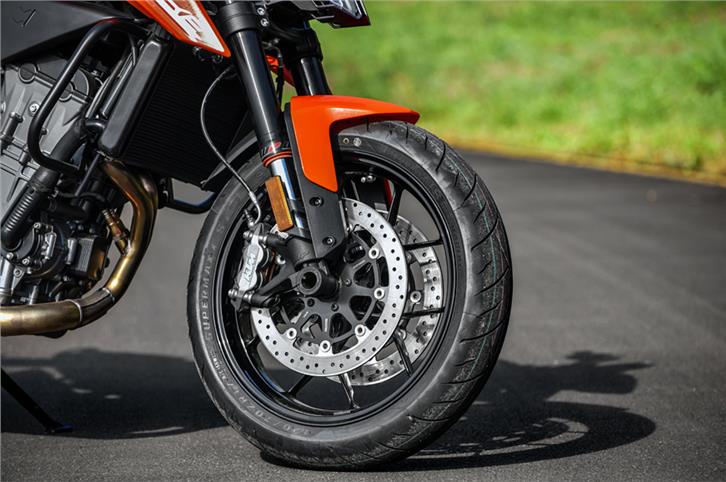 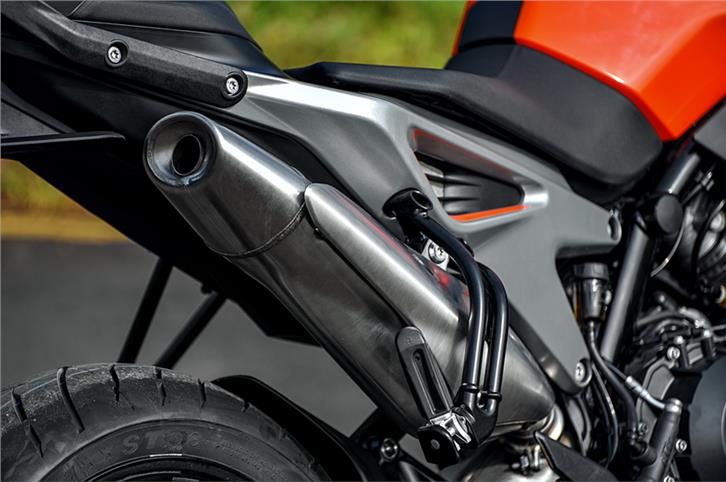 Over the past year, anticipation over the KTM 790 Duke’s India arrival grew to a fever pitch, but the launch announcement of its introductory 8.64 lakh price tag (ex-showroom) certainly put a dampener on the proceedings. After all, we simply expect KTM to offer exceptional pricing in our market. Nevertheless, this is a KTM, so game-changing price or not, the 790 Duke is bound to be one intense ride. Question is, will it be special enough to justify the price?

There’s reason to believe that it will the moment you take a look at it, because the 790 Duke looks incredibly purposeful in its presence and stance. KTM wants this bike to be the lightest, most precise tool in the box; and the design reflects this through its completely minimal clothing. Whatever body panels the bike does wear look lethal sharp and things like the tall fuel tank, edgy extensions, upswept exhaust and chunky swingarm add heaps of character. At the same time, the rear looks quite bland and I wish the 390-style LED headlight and mirrors had their own identity. Still, the overall effect carries the trademark KTM-style aggression and quality levels are quite good as well, especially in areas like the TFT display and the adjustable brake levers, both different from the 390 Duke. 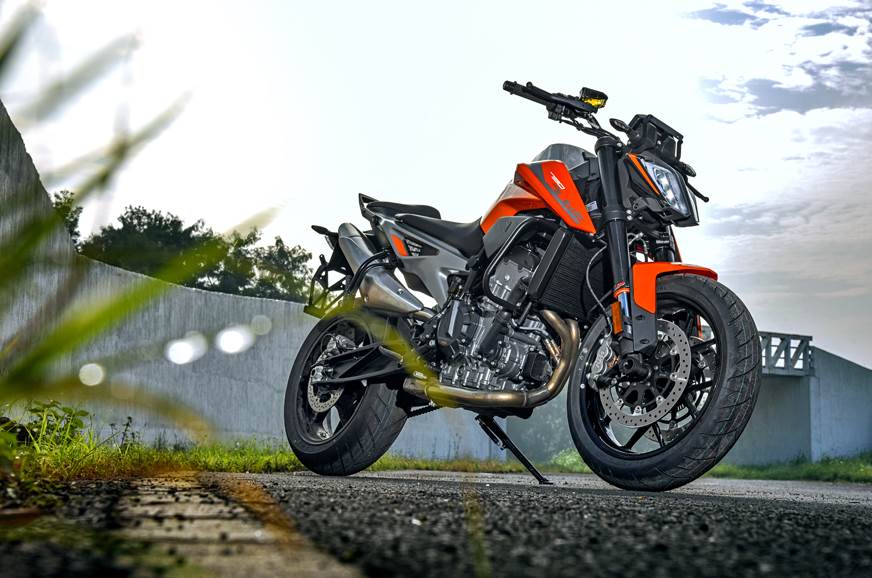 Sharp theme aside, the standout factor is that this motorcycle is really quite compact, and you feel that the moment you sit on it. The effect is so strong that if, for some reason, you find yourself blindfolded, it’d be a little hard to tell whether you’re sitting on a 390 or a 790. At the same time, I find that the riding position is quite spacious and while the ergonomics are reasonably sporty, neither the foot pegs nor the handlebar are extreme in their positioning. The 825mm seat height may put some off, but the slim form factor makes it a little easier to get the feet down. 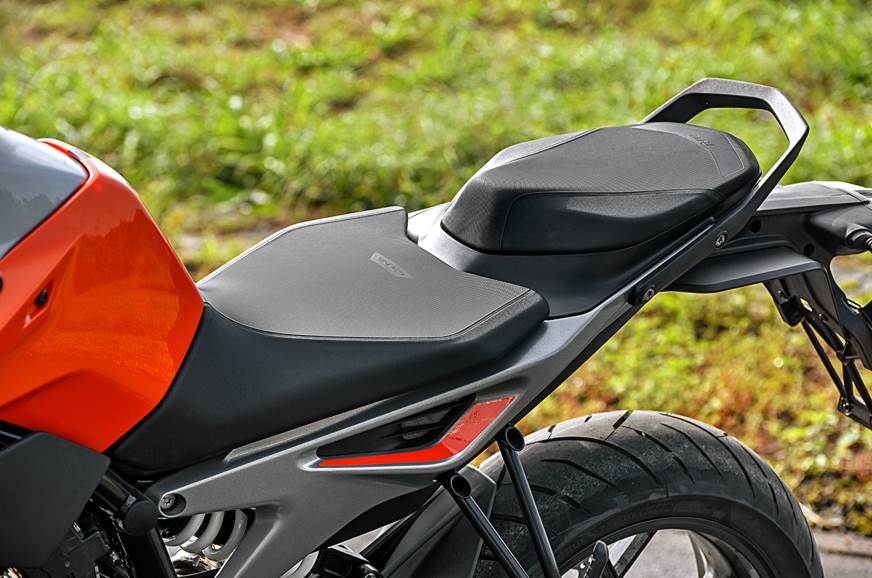 It isn’t easy to get an 800cc motorcycle to feel this svelte around the waist, and KTM has made a couple of very interesting decisions to achieve this – starting with the frame. The 790 doesn’t use a trellis frame, which is something you’ll see on almost every road-going KTM and even their MotoGP bike. The frame is still built out of tubular steel, but it's a smaller, seemingly simpler unit with two spars on top and it uses the engine as a stressed member. The result is a main frame that weighs just 8.8kg, while the smart-looking aluminium subframe is just 1.7kg per side.

The 790 also stands out, being the first-ever KTM to use a parallel-twin motor – another decision taken for size and packaging advantages, as well as price advantages over V-twin motors. Parallel twins also have the advantage of being cheaper to both produce and maintain. This 8-valve DOHC motor displaces 799cc and runs a high compression ratio of 12.7:1 which helps it put out 105hp and 87Nm of torque. The bike's power figure is the lowest in its segment, but the torque figure is almost class-leading and that’s what defines the riding experience.

When it comes to character, KTM has gone down the increasingly popular path of using an uneven firing order to give the engine a more textured sound and feel that is quite reminiscent of its V-twins. The result is a loud, angry and quite likeable beat from the exhaust. The motor is much smoother than the sound would have you believe, and vibration levels are very well-controlled, thanks to the use of two balancer shafts. From some brief slow-speed riding in the pit lane, it also seems quite content to ride quite smoothly at low revs, especially in Rain mode. There are four riding modes in total, and Rain offers a 2 percent drop in power with very mellow responses, while Street Sport and Track offer increasing levels of throttle aggression as you go up. 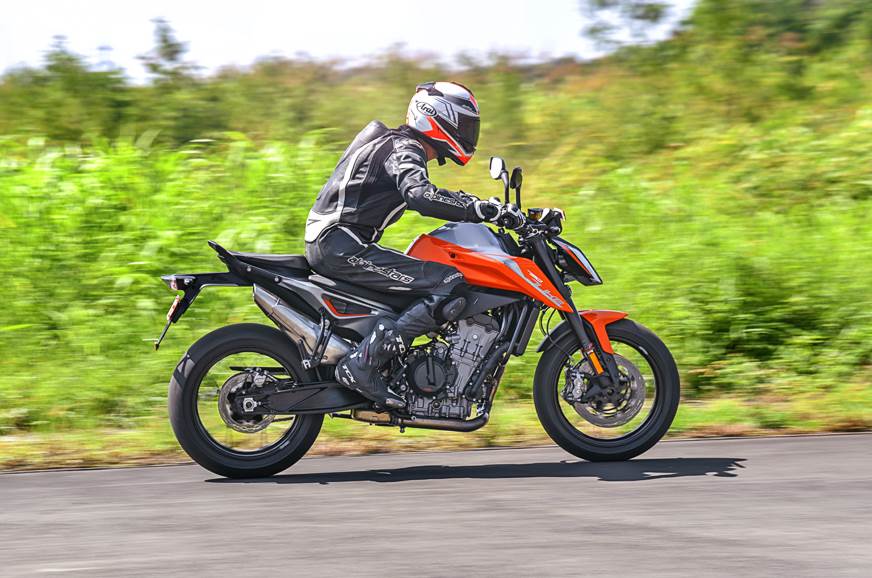 The motor is very enjoyable to wring out and short gearing only serves to further exaggerate the 790’s superb low- and mid-range punch. You have to be quick with chasing gears through the 6-speed transmission, especially because the engine charges into the redline at just 9,500rpm. Out on Bajaj’s test track, the acceleration through the tight sections was intoxicating and the bike topped out at about 230kph, which seems close to what the actual top speed would be.

But as much of a joy this engine is, it's the chassis that is the real star. The bike feels far more compact than any of its rivals and the sense of lightness and agility is amazing. With a kerb weight of about 187kg, the 790 Duke is on par with the Street Triple as the lightest in class on paper, but it feels noticeably lighter when you’re actually riding the bike. 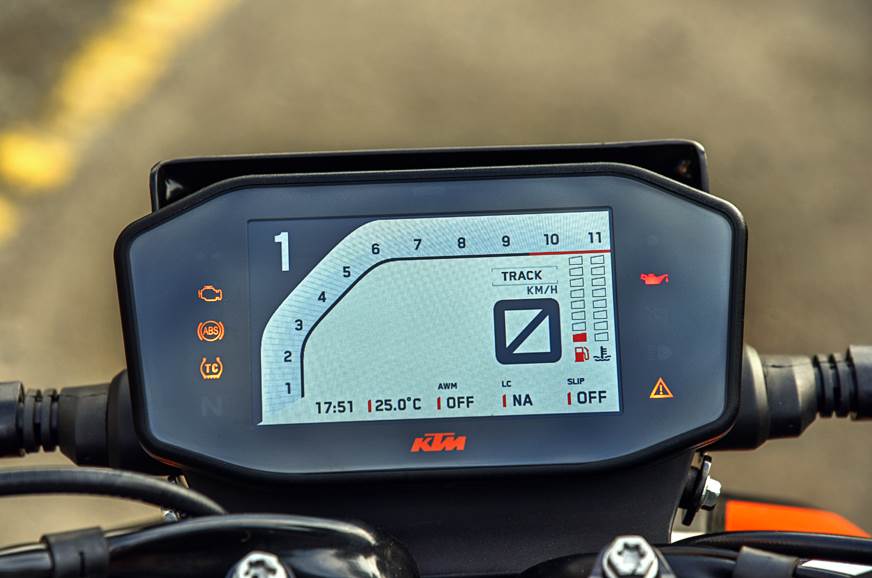 Then it’s no surprise that the 790 leaps into corners with absolutely minimal effort and changes directions lightning-fast as well. The good news is that this doesn’t come at the expense of stability; partly because this bike has among the longest wheelbases in its class. It also helps that there’s a steering damper to help prevent the handlebar from getting too loose and wild.

The WP suspension offers only pre-load adjustment for the rear shock – which is a bit disappointing, but the set-up is very nicely balanced. The bike feels confident and well-damped, but neither end comes across as too stiff. It should be decently pliant on the street, but on track, the 790 is such an enjoyable toy. None of its rivals feel this effortless, and I can’t remember the last time I got my knee down so easily on a motorcycle. At the same time, it doesn’t quite pack superbike levels of suspension, brake and tyre sophistication, as something like the Triumph Street Triple RS would – we’ll have to wait for a 790 Duke R for that.

It is still very competent though and when it is time to slow down, the J.Juan brakes work really well. They don’t have ultra sharp bite, but they’re strong and pack good progression and feel. It’s a similar story with the Maxxis tyres – they aren’t track focused, but are capable in the dry and don’t feel like a compromise. Even when the rear tyre did find its limit, the 790 brings forth the next trick up its sleeve. 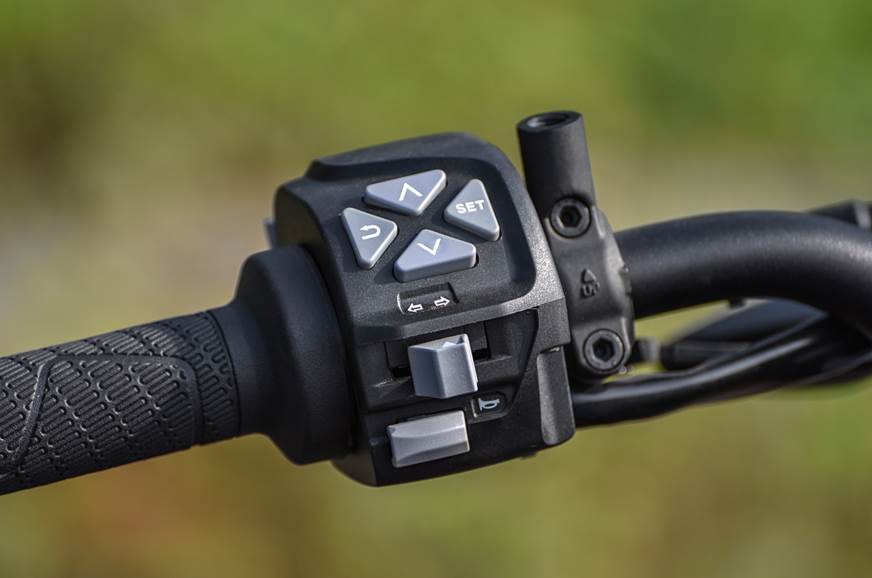 The next trick would be the electronics package and you simply won’t find a more comprehensive or sophisticated set of assists on any motorcycle at this price. The first three riding modes are preset, but Track mode allows you plenty of customisation. Within the mode, you can tweak the throttle response (I found 'Track' too sharp, but 'Sport' worked nicely) and disengage the wheelie control, making first-gear power wheelies a regular affair. There’s even a launch control system, although this becomes active only after the bike crosses the first 1,000km, so we couldn’t try that out on the fresh machines we had to ride. What I liked most is that you can shift between 9 levels of traction control in track mode using just the up/down arrow buttons on the handlebar, even when on the move. There’s also a bi-directional quickshifter which works quite well and the 790 also uses an IMU, so the traction control system is corner-sensitive, as is the ABS. If you like, the rear ABS can be deactivated, but the entire system can’t be turned off. 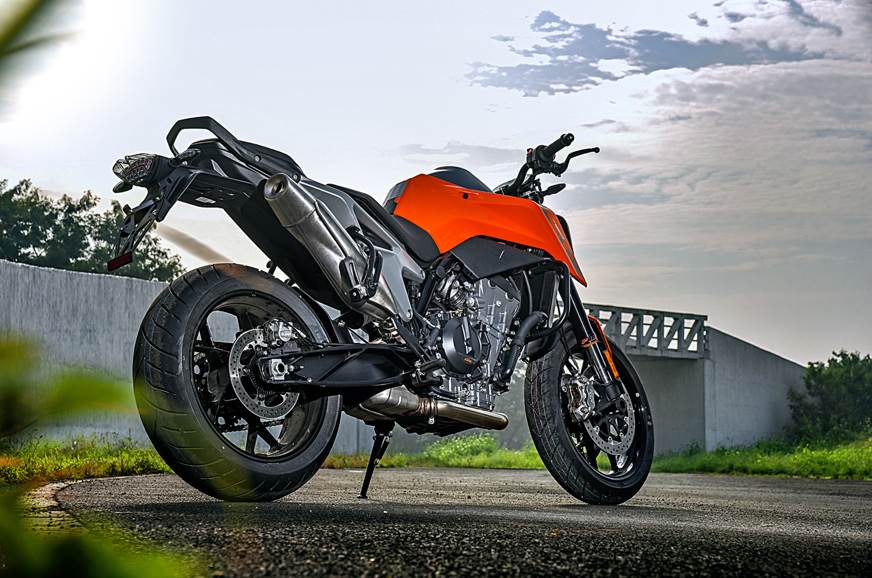 While it’s a proper little thriller on the track, the 790 is primarily a street bike and there are several suggestions that it might make for a very nice one, even on our roads. The turning radius is quite tight, the clutch is light and the engine’s low speed manners seem far smoother than the 390 Duke. 185cm of ground clearance should make it speed-breaker immune as well. What remains to be seen is just how hot things will get for the rider and pillion in city traffic.

For now, the 790 has exceeded my expectations. This is a KTM, so it’s easy to expect an action-packed ride, but the overall package appears to appeal well beyond the scope of just performance. As for the price – yes, it certainly isn’t as affordable as we hoped, but over the past seven years, KTM has taught us to expect thrilling performance at an unbelievable price. Unfortunately, the 790 comes to India as a CKD, with minimal localisation restricted to things like the engine and saree guards.

If you look at international pricing though, the 790 is positioned above its four-cylinder Japanese rivals and below the Euro competition from Triumph and Ducati, which is the case in our market as well. If anything – it highlights that the Street Triple range is far too expensive in India. In that sense, the price can be reasoned and while this KTM doesn’t offer irresistible pricing, it does a superb job of making you fall in love with the riding experience.