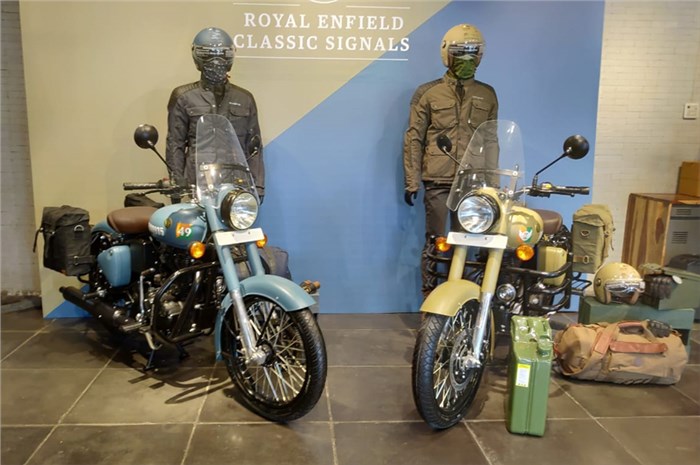 Royal Enfield has launched the new Classic Signals 350 ABS at Rs 1.62 lakh (ex-showroom, Pune). The new motorcycle pays homage to the Indian Air Force and Army and carries a premium of around Rs 15,000 over the rear-disc brake equipped non-ABS Classic 350. The Classic Signals 350 is also the first Royal Enfield motorcycle on sale in India to be equipped with dual-channel ABS. The bike will be sold through dealerships only, and not online.

This variant of the Classic 350 is available in two matte colours (blue and brown) and both, feature brown-coloured seats. Both bikes are also equipped with optional saddle bags, crash guards and large windscreens. It also gets a unique serial number painted on the tank in large font. Enhancing its retro appeal are blacked-out elements like the exhaust muffler, engine, rims, handlebar and the headlight bezel. The bike also has a metal Royal Enfield badge on the tank finished in gold and green. While the bikes are being displayed without rear seats, Royal Enfield has said that it will provide them with the motorcycle.

Mechanically, the new Classic Signals 350 remains identical to the standard motorcycle. It’s powered by a 346cc, air-cooled, single-cylinder engine producing 19.8hp and 28Nm of peak torque. Power is transmitted via a 5-speed gearbox. Also, the Classic Signals 350 features a rear disc brake as opposed to 153mm drum unit as seen on the standard bike.