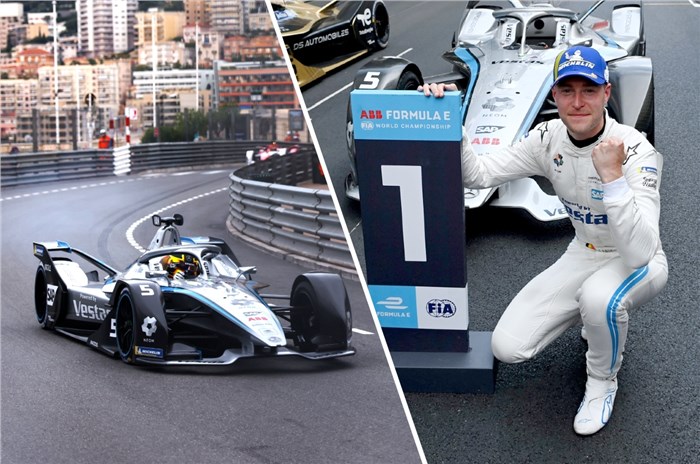 It seems instinctual for drivers to want to jostle for position in the initial stages of the race when the field is bunched up. But we’re seeing a new approach emerge in Formula E this year – one where sitting back and taking it easy in the early stages can pay dividends in the end.

It’s a strategy that worked in Stoffel Vandoorne’s favour at the Monaco E-Prix, as he secured his first Formula E win in over a year. Speaking at a media session, the Mercedes-EQ driver explained this new approach.

Energy saving early on is key

Formula E is often described as a game of chess, and that’s for good reason. In addition to the on-track racing, drivers also have to factor in energy management, the two mandatory Attack Mode activations and a lot more.

Each driver starts the race with 52kWh of useable energy and the more time they spend racing flat out or being caught up in battles, the more energy they’ll consume. So knowing when to conserve and when to push is a crucial skill for any Formula E driver to possess.

Use up too much energy in the initial stages of the race, and you could end up being a sitting duck waiting to be passed by those who have more battery energy in store. Formula E’s new qualifying format has helped generate some consistency at the starting grid by doing away with the older format that often penalised the more successful drivers. But this, combined with just how competitive the grid is, has further accentuated the energy management aspect.

“It’s always a hard balance to make,” Vandoorne told Autocar India. “Obviously, in an ideal situation, you don’t want to fight too much in the beginning. But when you’re in these top positions, you also don’t want to lose the position. So it’s a very hard balance that you have to strike.”

Vandoorne refers to the Rome E-Prix as an example. He’d started from pole, but it was Jaguar’s Mitch Evans who won from ninth on the grid. “I was in Rome leading the race and I was fighting a bit with Robin [Frijns]. We were wasting some energy, and then Mitch came through with an energy advantage. It was kind of the opposite [in Monaco], where I was able to hold back a little bit in the beginning and then I was able to come through,” he explained.

“So I think it’s just the nature of the championship right now; we’re so close with all the top guys consistently at the front. The racing approach has definitely changed a little bit. It’s more about being efficient in the first part, and then there’s definitely some hard fighting after that.”

The current season will be Mercedes’ last in Formula E. Despite having a wealth of experience in other racing series like IndyCar and the World Endurance Championship, Vandoorne says he’s committed to the electric racing series. “Mercedes is leaving after this season, so it means that I have to look for something else. But my mind is very much in Formula E and that’s where I want to be,” he said.

“There are a lot of different opportunities out there, but for me, what is important is to have a strong package, a strong car that will enable me to continue to fight for victories and championships in the future.”

He’s currently linked to a potential seat at the new DS and Penske alliance team for next season. But nothing has been confirmed so far.

The Monaco E-Prix also saw the unveil of the new Gen3 Formula E cars, boasting a 100kW power boost, improved efficiency and lower weight. Vandoorne reckons all of this will “improve the handling and driveability” of the car. But he also stressed that with Gen3 still a couple of months away, the drivers are still focused on the current season.

His Monaco E-Prix victory also helped Vandoorne take the championship lead, six points ahead of Jean-Eric Vergne. The Berlin E-Prix double header is up next on May 14 and 15, and it’s where Vandoorne had scored his maiden Formula E victory back in 2020. So it’s been a strong venue for him and Mercedes, but Vandoorne points out that it’s a rather peculiar and unforgiving circuit. “You really need to focus on getting the car in the right window all the time, otherwise it can quickly go quite wrong,” he explained.

“In the past we’ve got it right a couple of times, but we’ve also got it wrong a few times. That will be the key focus – to get the car in the right window and then hopefully we should be able to have a good result.”