Vandoorne benefitted from Wehrlein’s retirement and won ahead of Evans and Vergne. 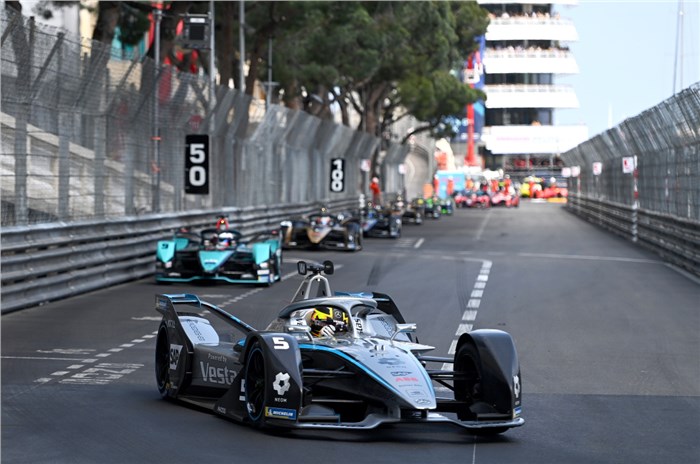 Stoffel Vandoorne secured his first win of the 2022 Formula E season, winning the Monaco E-Prix with some tactical energy management and a good bit of luck on his side. The Mercedes-EQ driver leapfrogs to the top of the standings as a result, and was joined on the podium by Jaguar TCS Racing’s Mitch Evans and DS Techeetah’s Jean-Eric Vergne.

It was also an important weekend for Formula E, with the championship unveiling its faster, more efficient Gen 3 race car just before the race.

Vandoorne started from fourth on the grid, with Evans, Vergne and Porsche’s Pascal Wehrlein ahead of him. Wehrlein had passed Vergne to take the lead, but slowed down just a minute later as his car was stricken by a technical issue that cut off all power.

With Vergne taking his second attack mode, Vandoorne assumed the lead of the race. The full course yellow triggered by Wehrlein played into Vandoorne’s favour since it meant that Vergne couldn’t gain anything from his final attack mode activation.

This allowed Vandoorne to pull away out at front, but this gap was soon wiped away when Oliver Rowland and Andre Lotterer crashed out two laps later. This time around, the timing of the Safety Car hurt Vandoorne, rendering his second Attack Mode boost all but useless. But he managed to keep those behind him at bay at the restart and cruised to victory from there.

"It is an amazing feeling, Monaco is always a special race to win as a driver," said Vandoorne. "Last year we had a tough time here, this year we managed to turn it around. The target was to qualify at the front and then I knew we would be in the mix, and that is exactly how the race panned out. We were flying today, massive well done to the team for giving me a strong car. It has not been an easy start to the season, but it shows the consistency we have. I am extremely happy."

The Safety Car allowed Evans to catch up to Vandoorne, but he dropped back behind Vergne and Robin Frijns after activating his second Attack Mode. He was able to use the power boost to overtake the two, but Vandoorne was already out of reach by then.

Evans had to settle for second place. While he couldn't quite replicate the highs of his double victory in Rome, this still adds some hefty points to his collection. After a tough start to the season, Evans said a poor Mexico E-Prix was a wake-up call for Jaguar. The team spent the seven-week gap between that race and Rome making some critical changes, which seem to have unlocked the pace and energy management that they've been looking for.

Vergne fended off Frijns and his teammate Antonio Felix da Costa to grab the final podium spot. The Frenchman remains the only driver to score points in every race this season.

Mahindra Racing misses out on points

After a tough outing at Rome, Mahindra Racing showed better pace in Monaco, but still had no points to show for it. Rowland was battling for a top five finish when he lost the rear and hit the wall, taking out himself and Lotterer.

Alexander Sims made good progress from 17th on the grid to finish 11th, just outside the points. "It was an interesting race. At times it seemed like we had the pace, but we worked the tyre too hard and that meant we weren’t able to utilise Attack Mode well," Sims said. "Strategy-wise we were affected by the safety car and full course yellows more than others and this meant that the end result wasn’t that great. However, it was sensible to finish the race and learn more ahead of the next round in Berlin.”

Vandoorne has now assumed the overall lead of the championship, six points ahead of Vergne. Evans is up to third overall, just three points behind Vergne, while Frijns is one point behind him in fourth.