As winner of the 2021 Red Bull Ace of Dirt, Mahesh V.M. has earned the chance to train with Indian rally ace CS Santosh. 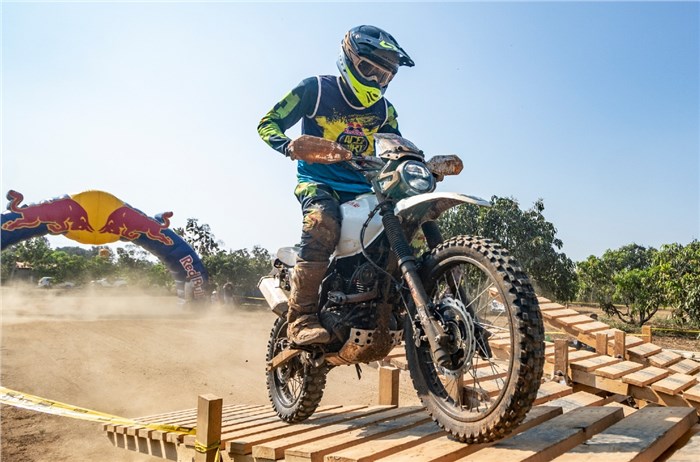 The second edition of the Red Bull Ace of Dirt concluded recently, with Kerala’s Mahesh V.M. beating out 29 other riders to take top honours. With this, he has also won the chance to train with Indian rally ace CS Santosh.

Battling it out on a specially laid out course (designed by CS Santosh himself) at the Big Rock Dirtpark, the bike race had multiple stages. In the first stage, all 30 participants were put to the test through Motocross, Dirt track and Enduro sections, using their own machines. The final four then had to compete astride an identical Hero XPulse, eliminating any advantage or disadvantage their own bikes would have had.

Mahesh V.M. set a time of 20mins 29secs to defeat Sathyaraj A, Sachin D and Gideon B to take overall victory. The level of talent at the event was of high calibre – Mahesh is an accomplished two-wheeler racer in his own right, with four national supercross titles to his credit. In 2017, he even made history by becoming the first rider to win three championships in a single event.

“It was my first-time experience riding for an event like this. It was a great experience, one where I could learn many things,” he said.

“A huge kudos to Red Bull India and Big Rock Dirtpark for hosting such a wonderful event. There were plenty of talented riders who did put up competition. Overall, I am happy that I could win the event."

CS Santosh was also present at the event, his first major public appearance since his heavy crash in the 2021 Dakar Rally. Commenting on the event, he said, “I am delighted that Red Bull is hosting tournaments like Red Bull Ace of Dirt, which give wings to aspiring motocross racers across the country and thereby increasing interest of the sport amongst youngsters.”

“It was a wonderful day. I look forward to train Mahesh V. M., he surely showed some splendid skills.”

2021 Indian National Rally Championship to kick off in April