The bike race will test riders’ abilities on a mix of Motocross, Enduro and Dirt track sections. 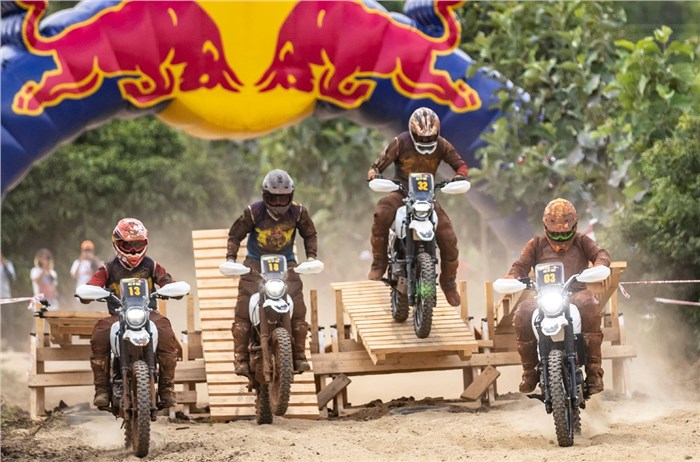 The Red Bull Ace of Dirt bike race is back for its second edition, which will be held at the Big Rock Dirtpark near Bengaluru on March 18-19. The winner of the event will earn the opportunity to train with Indian rally ace, CS Santosh. Read on for more details.

The race follows a rather unique format since the specially laid out course, designed by CS Santosh himself, consists of Motocross, Enduro and Dirt track sections. Obstacles like mud pits, loose sand, wooden bridges and more will test the participants’ abilities even further.

32 selected riders will battle it out head-to-head, competing in a series of elimination rounds before one overall winner is crowned. Just like the first edition in 2019, this year’s Red Bull Ace of Dirt will once again be supported by Hero MotoSports.

Commenting on the event, CS Santosh said, “In 2019, I grabbed the opportunity with energy drink giant Red Bull to dream up this event – the toughest two-wheel race in the country. After the successful first edition, I am super excited about the upcoming event.”

“Red Bull Ace of Dirt is a unique concept, a new format of racing that has not been seen in India before. It combines different off-road disciplines - Motocross, Dirt Track and Enduro, allowing different types of riders to compete together. It tests different skills and will hopefully help drivers to one day transition into cross country rally racing and then on to the Dakar! Hero MotoSports joined hands as part of their vision to promote Motor Sports and Off-Road biking culture in India and I am thrilled that they will continue to support this year.”

Winning the chance to train with CS Santosh

When it comes to preparing for a future in enduro racing or cross-country rallying, training is key. So winning the chance to train with someone as experienced and accomplished as CS Santosh is a massive opportunity.

The inaugural Red Bull Ace of Dirt was won by Yuva Kumar, who also happens to have five National Rally titles to his credit. “Due to the event I got the opportunity to train with CS Santosh,” said Kumar, who has also confirmed that he will be participating in this year’s event, too.

“He trained me on the basic skills and shared many lessons from his vast international experience and especially from the Dakar. It made me realise that to be the best you must be trained under the best. I am really excited for the second edition and looking forward to again giving my best performance in the event,” he added.