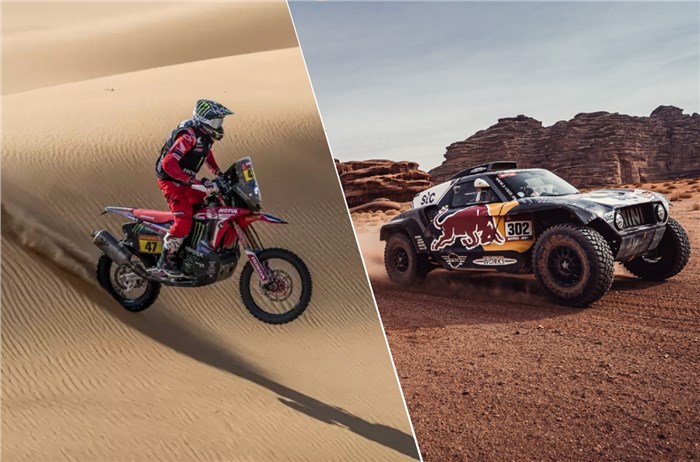 The 2021 Dakar Rally has wrapped up, and after 12 demanding stages in the Saudi Arabian desert, Stephane Peterhansel and Kevin Benavides have taken top honours in the car and bike categories. Keep reading to catch up on all the action from the Dakar 2021 finale:

Peterhansel added to his record for the most Dakar wins by securing his 14th victory at the grueling event exactly 30 years after tasting success for the first time (albeit in the bike category). The X-raid Mini driver, along with co-driver Edouard Boulanger moved into the lead on the second stage and fought off closest rivals Nasser Al-Attiyah and Carlos Sainz to hold on to it ever since.

He only ended up winning one of the 12 stages, but it was consistency that won him the Dakar Rally as he managed to complete 11 out of 12 stages in the top three. “It’s still the same emotion for the 14th victory. Like I said, to win the Dakar is always really complicated. There are no easy victories on the Dakar. This one from the outside maybe looked easy, but it was not easy every day to manage the small gap over Nasser,” Peterhansel said.

“There was a lot of pressure on the body. We felt every day that we had everything to lose, so it was complicated to manage, but in the end we did a really good job together with Edouard for his first race in a top car.”

Toyota’s Al-Attiyah ended up finishing 13 mins 51 secs adrift in 2nd place. While he did pick up five stage wins, he also ran into his fair share of reliability and navigational trouble in a difficult edition that saw even some of the best racers struggle with navigation. 2020 Dakar winner Carlos Sainz won the final stage to finish third overall.

The bike category saw a lot more variation with as many as six different riders taking the overall lead at some point. Kevin Benavides ultimately triumphed to hand Honda its second consecutive Dakar win and also become the first South American rider to win in the category.

He ended up finishing the final stage in 2nd place, behind his Honda teammate Ricky Brabec. “It was absolutely crazy. I started third and after fifty kilometres I was in front opening the stage. I feel that everything was complicated, because Ricky started to catch up with me. I started to push a lot, all day, and stayed focused, so I did a good job today,” said Benavides.

“You couldn't think of winning during this Dakar, you had to keep focused. You don’t think, you just concentrate on the action and nothing else, because everything can change in one second. I am really proud to be the first South American winner,” he added.

Brabec finished second overall, handing Honda its first 1-2 finish in the Dakar Rally since 1987. KTM’s Sam Sunderland had to settle for 3rd overall after only managing a 12th place result in the last stage.

As for the Indian contingent, Harith Noah finished a stellar 20th overall to become the first-ever Indian to finish in the Dakar top 20. Hero MotoSports’ Joaquim Rodrigues and Sebastian Buhler finished 11th and 14th overall, respectively. Meanwhile, Ashish Raorane – who competed in the Dakar Experience category for stage results only following his Stage 5 crash – finished the last stage in 58th place.

Along with Benavides, there’s another Argentinean who has won in Dakar 2021, with Manuel Andukar taking victory in the quad category for 7240 Team. This was only his fourth time competing in the Dakar Rally.