The final round of the 2021 F3 Asian Championship saw Mumbai Falcons finish on the podium in all races, with Daruvala and Maini earning podium results. 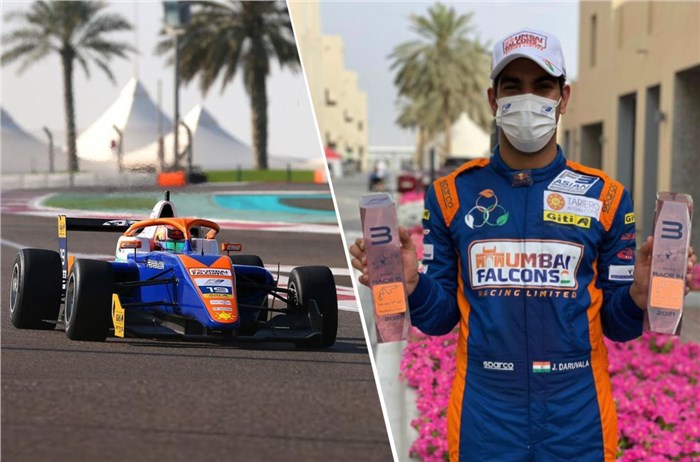 Jehan Daruvala completed the 2021 F3 Asian Championship with an overall ranking of 3rd place, behind championship winner (and fellow F2 driver) Guanyu Zhou and Pierre-Louis Chovet. While it may not have been the result he was aiming for, it yet hands the Indian F1 hopeful 12 valuable Super Licence points.

Mumbai Falcons ended what was their debut season in international racing on a high note, with both, Daruvala and Kush Maini scoring podium finishes at Abu Dhabi’s Yas Marina Circuit. Read on to catch up on all the action from Round 5 of the 2021 F3 Asian Championship.

Daruvala briefly led the F3 Asian Championship after Round 2. But his title chances slipped away after a difficult Round 4 in Dubai that saw him score points in just one race, while Zhou and Chovet scored strong results. He headed into the final round with a three-place grid penalty for Race 1 for causing a collision with Cem Bolukbasi.

This meant that that despite qualifying 3rd, he started Race 1 from 6th on the grid. The Yas Marina Circuit is notorious for being a difficult track for overtaking and there wasn’t much Daruvala could do as he crossed the line in 7th place. He did, however, set the third fastest lap time to secure a 3rd-place starting position for the next race.

Daruvala found his way back on the podium in the final two races, completing both in 3rd place. This was enough for him to seal 3rd place in the championship. Alpine junior Zhou ended up defeating Chovet to clinch the title.

“We had some bad luck earlier in Dubai, but it is what it is now. I tried my best to come 2nd in this race, but it was impossible to overtake. I tried my best, I gave it my all. I came close, but 3rd it is,” Daruvala said after the final race.

As he gears up for a second season in Formula 2 with Carlin, Daruvala decided to spend the winter break competing in F3 Asia for all-Indian outfit Mumbai Falcons. The obvious appeal of the championship for current F2 drivers like Daruvala and Zhou would be the fact that it qualifies for Super Licence points. A Super Licence is necessary for those who want to compete in Formula 1 and a driver needs to notch up 40 points to earn one.

It’s been a tough season for Kush Maini, as he struggled with setup and engine issues. Just when it seemed like he was finding his rhythm, he was hit by a spate of bad luck in Dubai. But he finally earned his redemption after securing his maiden F3 Asia podium, finishing Race 1 in 3rd place.

He completed the remaining two races in 8th place. “Not been the smoothest of rides, had a lot of engine issues throughout the campaign and some really unlucky moments. But all the credit goes to Mumbai Falcons who never stopped believing in my capability and we finished off the championship strong with a podium. Historic moment for Indian motorsports, it’s been a pleasure to be a part of it,” he said.

Mumbai Falcons ended up finishing 3rd in the teams’ standings.