Jehan Daruvala to continue in F2 with Carlin

The Indian F1 hopeful will also continue to be part of the Red Bull junior programme as he undertakes his second season in F2. 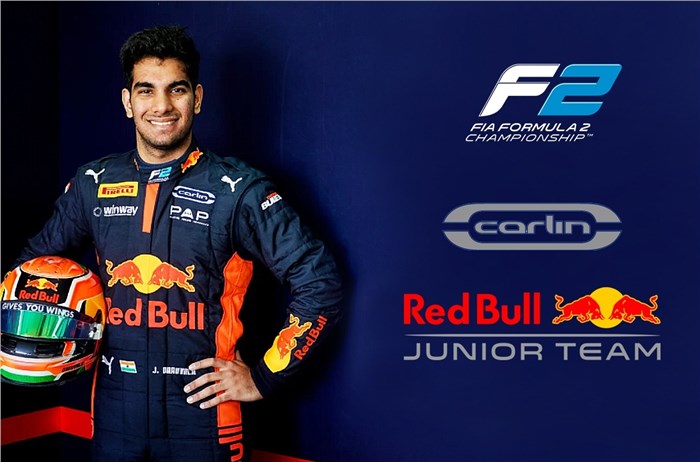 Jehan Daruvala will undertake a second season in Formula 2 (F2), confirming that he will continue racing with Carlin. Additionally, Red Bull Racing has also confirmed that the Indian F1 hopeful will continue to be part of its junior programme.

Jehan Daruvala to stay with Carlin in F2

Daruvala signing a new deal with Carlin has long been expected considering he finished the 2020 F2 season on a strong note, securing his first win in the series in Bahrain. This came as some much-needed redemption for the 22-year-old after what had been a tough first half of the season.

After struggling to get in the groove early on, his strong performances in the final two rounds saw him finish 12th overall. But motorsport fans can expect him to nab consistently strong results in his second year in F2. Reigning F2 champion Mick Schumacher, who will race for Haas in F1 this year, had also finished his rookie F2 season (in 2019) in 12th place.

“We’re extremely pleased that we have the opportunity to carry on the great progress we have been making with Jehan and have another attack on the FIA F2 Championship,” said Carlin Team Principal, Trevor Carlin.

“Jehan did a great job last season as an F2 rookie, to really show his true potential by the second half of the season. To finish the year off with a third place and then a win, really confirms what we knew from the start. I expect Jehan to continue where he left off – challenging for wins from the outset in the new season.”

Additionally, Red Bull Racing has also confirmed that Daruvala will continue to be part of its junior programme. This is crucial since it gives him a clear ladder to move up to F1.

The programme has churned out some of the most prominent F1 racers in recent times, including four-time F1 world champion Sebastian Vettel, Max Verstappen and Daniel Ricciardo. Daruvala’s 2020 Carlin teammate Yuki Tsunoda will also move up to F1 this year, racing for AlphaTauri.

“I am very thankful to Red Bull for their continued faith in me. I’m extremely excited to be staying in F2 and with Carlin for 2021 as a Red Bull Junior. We made a lot of progress last year. It was great to end the season on such a high with my first F2 win and then back that up with front running pace in post-season testing,” said Daruvala, who will also be competing in the 2021 F3 Asian Championship later this month, as part of an all-Indian team backed by X1 Racing League franchise Mumbai Falcons.

The 2021 F2 season will kick off on March 26 in Bahrain. The calendar features a total of eight rounds and three races will be held at each round.