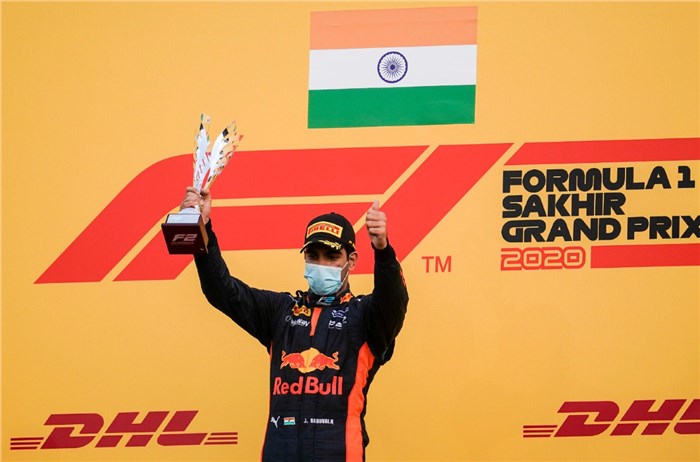 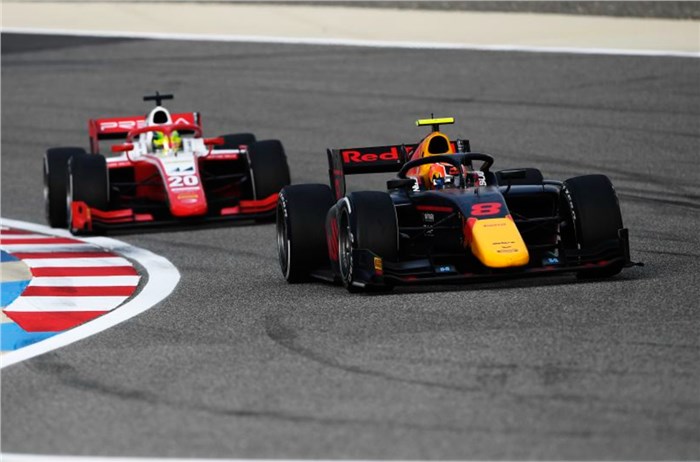 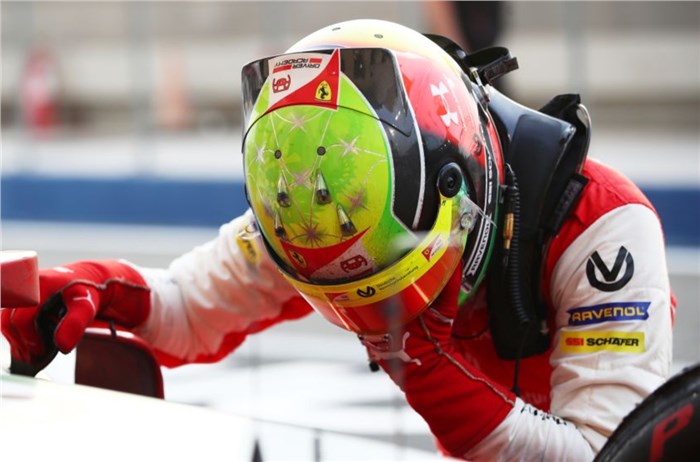 Jehan Daruvala scored his first Formula 2 victory after winning the Sakhir GP sprint race. Meanwhile, Mick Schumacher sealed the 2020 F2 championship despite a scrappy race that only saw him finish down in 18th place.

Daruvala did fall back to 3rd on the opening lap, but quickly clawed back the position as Schumacher suffered a big lock up while trying to defend. The Indian racer then shifted his focus on trying to catch race leader Dan Ticktum.

The two spent several tense laps tussling for position. With nine laps to go, Daruvala finally overtook Ticktum into the final turn and started opening up a healthy gap. He ultimately won the race with a 3.5 secs advantage. His teammate Yuki Tsunoda finished 2nd to hand Carlin a 1-2 finish.

This sees Daruvala finish his rookie F2 campaign on a high note – some much-needed redemption for the 22-year-old after what had been a tough first half of the season. While speaking with Autocar India last month, he did express that he was optimistic about his chances in Bahrain. The final two rounds really saw Daruvala showcase his potential as he’s clinched his first F2 win just a week after scoring his maiden podium in Bahrain.

“It feels really good to win the last race of the season and finish on a high. It was a great battle out there with Dan [Ticktum], which got close at times, but we respected each other and raced well. The car was really good and I couldn’t have asked for a better finish,” said Daruvala, who is expected to continue racing in F2 next year.

It ended up being a tricky race for Schumacher after his early lock-up left him struggling for grip on damaged tyres. He was ultimately forced to pit for fresh tyres, something that dropped him down the order and out of points contention.

Luckily for him, he hung on to his 14-point advantage after main rival Callum Ilott also failed to score any points. Ilott needed at least a 2nd place result along with the fastest lap to win the title. But it became evident that he, too, was struggling for grip. He lost a handful of positions in the closing stages of the race and could only finish 10th.

This allowed Schumacher to clinch the title with a total of 215 points, 14 ahead of Ilott. Tsunoda finished a point behind in 3rd place overall. Schumacher will follow in the footsteps of his famous father, seven-time F1 world champion Michael Schumacher, and step up to F1 next year, driving for Haas.

Jehan Daruvala on his F2 journey so far: Interview