Gaurav Gill fended off a late charge from Bikku Babu to continue his winning streak in the 2020 INRC and clinch the title. 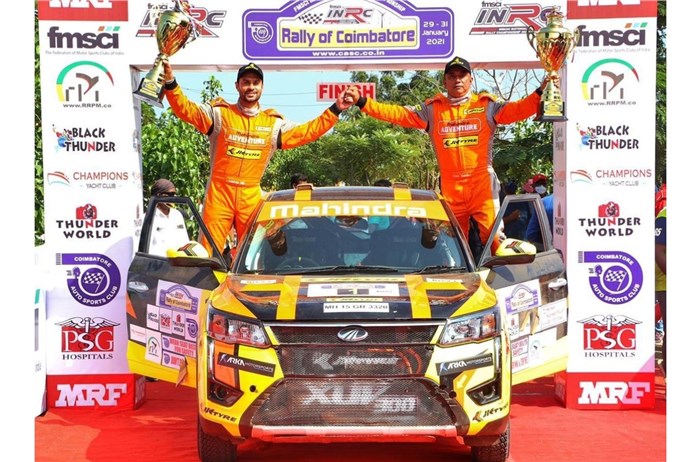 Gaurav Gill won the Rally of Coimbatore, Round 3, of the 2020 Indian National Rally Championship (INRC), to secure a monumental seventh INRC title. With this, he equals the record held by V. R. Naren Kumar, one of the most successful rally racers in the country.

With just one more round to go, Gill continues his undefeated run in the latest season since he’d also won Round 1 and Round 2 in Arunachal Pradesh.

The Rally of Coimbatore is regarded as one of the toughest events on the calendar and saw some big names drop out of contention early on, including Gill’s JK Tyre teammate Amittrajit Ghosh. He was standing 2nd overall after the first two stages but had to drop out after encountering some mechanical issues.

Gill, along with co-driver Musa Sherif, approached the stages more cautiously to ensure he could bring his car home, but it was yet enough for him to lead the timesheets at the end of the first day. Electrical issues on his car made the next day only trickier and this was compounded by the fact that MRF Tyre’s Bikku Babu was on a late charge.

Nevertheless, Gill held on and managed to win both the stages on the last day to record yet another victory with a time of 1 hour 27.56 mins.

Mahindra Adventure had decided to opt out of the 2020 INRC, but offered the rally-spec XUV300 to Gill and Ghosh, with both competing for JK Tyre instead. “The 7th National Champion title! A big thanks to JK Tyre Motorsport for the support during this pandemic and Mahindra Adventure for the Super XUV300,” Gill said in a statement posted on his social media.

“With one more round to go, it’s been an amazing ride with the newly developed Mahindra XUV300 and winning all the events outright in the second year only,” he added.

Bikku Babu wins in INRC2 at Rally of Coimbatore

Bikku Babu entered the final day trailing Gill by over a minute. Despite a spirited late charge, he had to settle for 2nd place overall. But he did end up taking victory in the INRC2 category. Defending INRC champion, Chetan Shivram, driving for Yokahama Tyres for their return to the Indian rallying scene, finished 2nd in INRC2 followed by Ritesh Guttedar.