VW expects 20-25 percent of Virtus customers to choose the stronger 1.5-litre engine, and the sedan to have a 12-15 percent segment share. We catch up with the VW India brand director to know more. 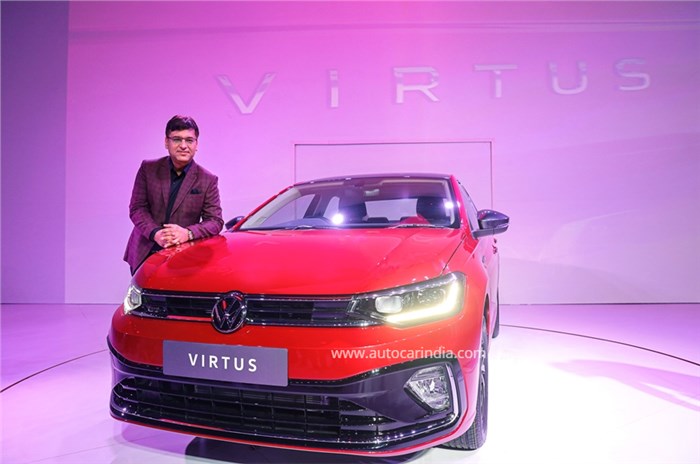 While SUV sales are soaring, the sedan segment has not really grown. What are your expectations from the Virtus?

The sedan category has been under pressure over the last three or four years, but the premium midsize sedan segment still grew by 30 percent last year, even if it was on a relatively small base. I feel that the segment lacks options, especially from European manufacturers, and that’s where the Virtus can make a big statement.

The Virtus is the largest car in its class, and also has the most powerful engine. So, it’s a very differentiated offering. Moreover, if I ask anyone to draw a car, they will still draw a three-box sedan. So, the love for sedans is quintessential, and I think this will reignite it.

Do you think SUVs are the biggest competitors to sedans?

I wouldn’t say so. I think they complement each other. The car market has been so hot for the last two years because people are preferring personal mobility. That’s why cars are in so much demand.

But, interestingly, this increased demand is driven by additional car purchases in the same families. So, if people want multiple cars in their family, they normally pick two different body styles. That is where I see the Taigun SUV and the Virtus sedan, for instance, together having the pride of place in any family in India. They are complementary.

Given that the 1.5-litre TSI is an imported engine, it will be expensive. So, what is your outlook for the more powerful version of the Virtus, in terms of sales percentage?

I can take cues from the Taigun. Looking at the current demand pattern for the SUV, the sales split between the 115hp, 1.0-litre TSI and the 150hp, 1.5-litre TSI engines is 75:25. I had anticipated the mix to stabilise at around 85:15 in the long term. It’s moving there, but it’s been slower than I expected it. And that’s why you see a long waiting period for the 1.5 TSI.

What market share are you expecting for the Virtus in its segment?

What is the profile of a typical sedan buyer these days?

We did a study which revealed that sedan buyers are generally in the 33-40 year age group, and that they want cars which are not only practical, but also stand out. So, those are the buyers whom we are targeting with this product. It suits that customer profile very aptly.

People in smaller towns tend to opt for either smaller vehicles or SUVs. So, is the Virtus more of an urban product, primarily geared towards metro cities?

There’s no longer a differentiation among buyers from super metros, metros, Tier II and Tier III towns. Everywhere, customers are aspiring for similar products. So, the Virtus appeals universally to all regions in the country.

VW had a wide range of sedans earlier, including the Jetta and Passat, which could have complemented the Virtus. Do you think that’s a bit of a miss?

I would really love to have more cars in our portfolio. The effort is ongoing, and maybe we’ll see some FBU (fully-built up) products.

But we have to be rational sometimes. A larger portfolio isn’t always the best. A leaner product range is more efficient (for the company) and makes us more agile.

Would you like Volkswagen to launch more sedans in India? Let us know in the comments below.

VW Polo could return as an import in GTI form