Taigun will be sold with two petrol engine options; first unit rolls out. 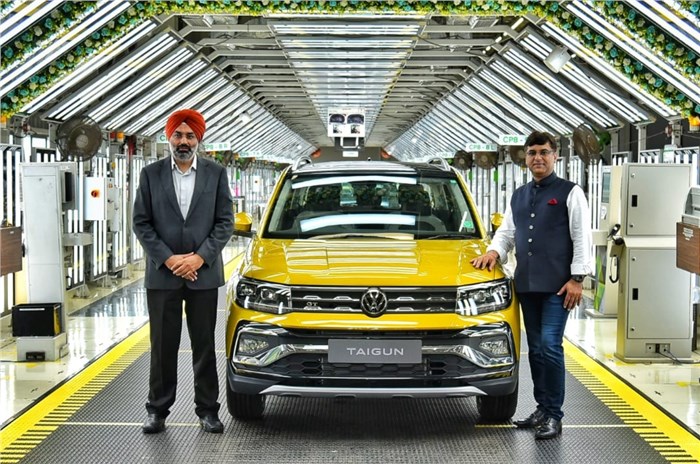 Volkswagen has started producing the Taigun, ahead of its launch in the coming weeks. The carmaker has also opened bookings for the midsize SUV for all customers and will begin deliveries in September.

Starting today, the Volkswagen Taigun SUV can be booked by all customers either at a dealership or via the company’s website. Earlier this month, Volkswagen announced via Twitter the commencement of pre-bookings for the SUV. However, that was only open to customers who had signed up for VW’s Taigun Squad programme.

Commenting on the announcement, Gurpratap Boparai, managing director, Skoda Auto Volkswagen India Pvt. Ltd., said, “Today, we embark on a journey that marks a significant milestone for Volkswagen, with the start of production of the Taigun. A thoroughbred Volkswagen, the Taigun retains the German engineering prowess, while achieving a localisation level of up to 95 percent. The Taigun has been designed to meet the needs of the discerning Indian customer and will be a competitive product offering in the fast-growing midsize SUV segment.”

The powertrain options on the Volkswagen Taigun are identical to that of the Skoda Kushaq, which means that it will come with two turbo-petrol engine options – a 115hp, 1.0-litre three-cylinder and a 150hp, 1.5-litre, four-cylinder unit. Both engines will come with a 6-speed manual gearbox as standard, with the 1.0 TSI getting a 6-speed torque converter automatic option and the 1.5 TSI getting a 7-speed dual-clutch automatic.

The Volkswagen Taigun will take on other midsize SUVs like the Hyundai Creta, Kia Seltos, Nissan Kicks and its own Skoda cousin, the Kushaq. The Taigun will also have to contend with the larger-in-size Tata Harrier and MG Hector in this segment. Prices for the Taigun are expected to range between Rs 10.50-17 lakh (ex-showroom), similar to the Skoda Kushaq.