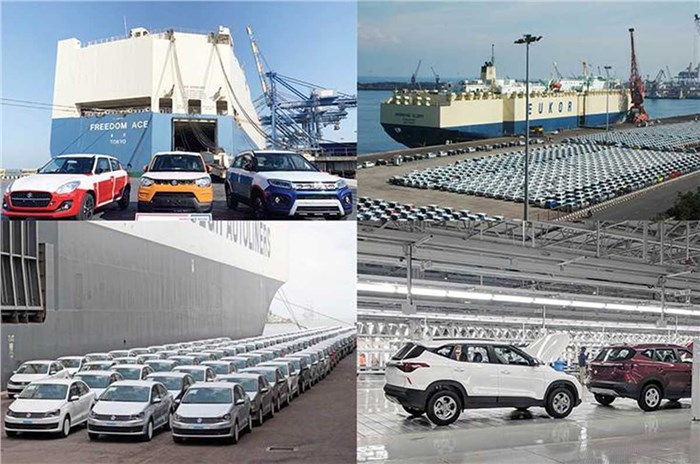 Passenger vehicle exports up by 66 percent, while two-wheeler sales post gain of 77 percent in first seven months of the financial year.

While domestic passenger vehicle and two wheeler sales were down 27 and 25 percent, respectively, in October 2021, exports for the same have posted a handsome growth in the first seven months of the financial year.

As per apex industry body SIAM, cumulative exports of made-in-India passenger vehicles, two-wheelers, three-wheelers and quadricycles crossed the 3.2 million mark between April-October 2021. At 32,47,934 units, this constitutes handsome 73 percent year-on-year growth (April-October 2020: 18,76,447), indicating that, with the opening up of key global markets, export-led growth is back for India Auto Inc. Let’s take a closer look at the segment-wise performance.

Hyundai Motor India, which wrested the No. 1 made-in-India passenger vehicle (PV) exporter title from Ford India in FY2020 and also took the title in FY2021, is at second position in the PV export rankings, behind Maruti Suzuki by 51,179 units at this stage. The top three export models for the company are the popular new Creta SUV (17,368 units), Grand i10 hatchback, and Verna sedan (16,927). The company has also just begun exporting the Alcazar SUV (1,465).

Ford India, which has pulled out of the domestic India market but is continuing export operations, despatched 18,022 vehicles from the Chennai Port. Its main export product was, as always, the EcoSport SUV with 15,382 units, down 35 percent YoY. It is the sole OEM to be in negative territory.

Renault India is also seeing demand come its way. With 13,027 units, it clocked strong 300 percent+ growth, albeit on a low year-ago total of 2,932 units. The Kiger-Triber combine with 7,347 units and the Kwid with 5,659 units were its main products for export markets.

For Honda Cars India, which registered 10,471 units in the period under review, the new City with 9,244 units was the star performer. 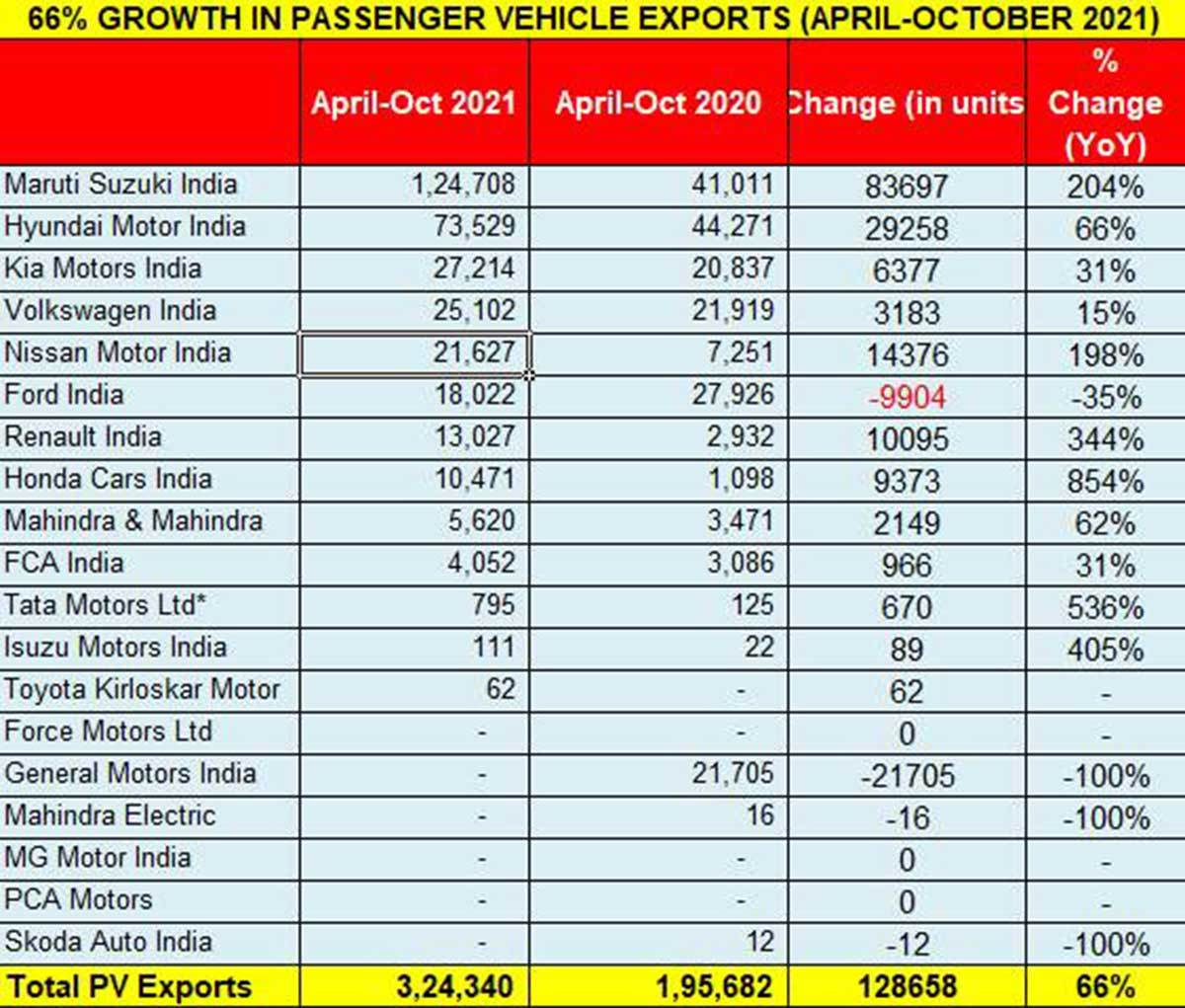 The two-wheeler industry, which is witnessing slackened demand in the domestic market particularly for entry level products, is firing on all cylinders in the export market. Its performance in April-October is indicative of that – 26,19,293 units, up 77 percent YoY (April-October  2020: 14,83,852).

Powering the segment, not surprisingly, is Bajaj Auto with 12,91,085 units (up 56 percent) and accounting for 49 percent of total two-wheeler exports.

TVS Motor Co, India’s No. 2 exporter in this segment, registered a robust performance with 6,42,854 units (up 92 percent) and accounting for 24.54 percent of total exports. This means Bajaj Auto and TVS together command nearly 75 percent of India’s overall two-wheeler exports.

What’s heartening is that the export growth story is benefiting all the key players. While Honda Motorcycle & Scooter India (HMSI), which exported 2,12,817 units, posted 117 percent YoY growth, Hero MotoCorp despatched 1,76,806 units, posting a similar 115 percent YoY growth. Look at the export sales table below and you will see that all players are seeing strong export sales.

All this is good news for India Two-Wheeler Inc. Judicious management of both domestic and export market sales helps inventory management as well as capacity utilisation. India Yamaha, Suzuki, Royal Enfield and Piaggio have all recorded smart export growth, and with export markets opening up in right earnest, things can only become better for the Indian two-wheeler industry. 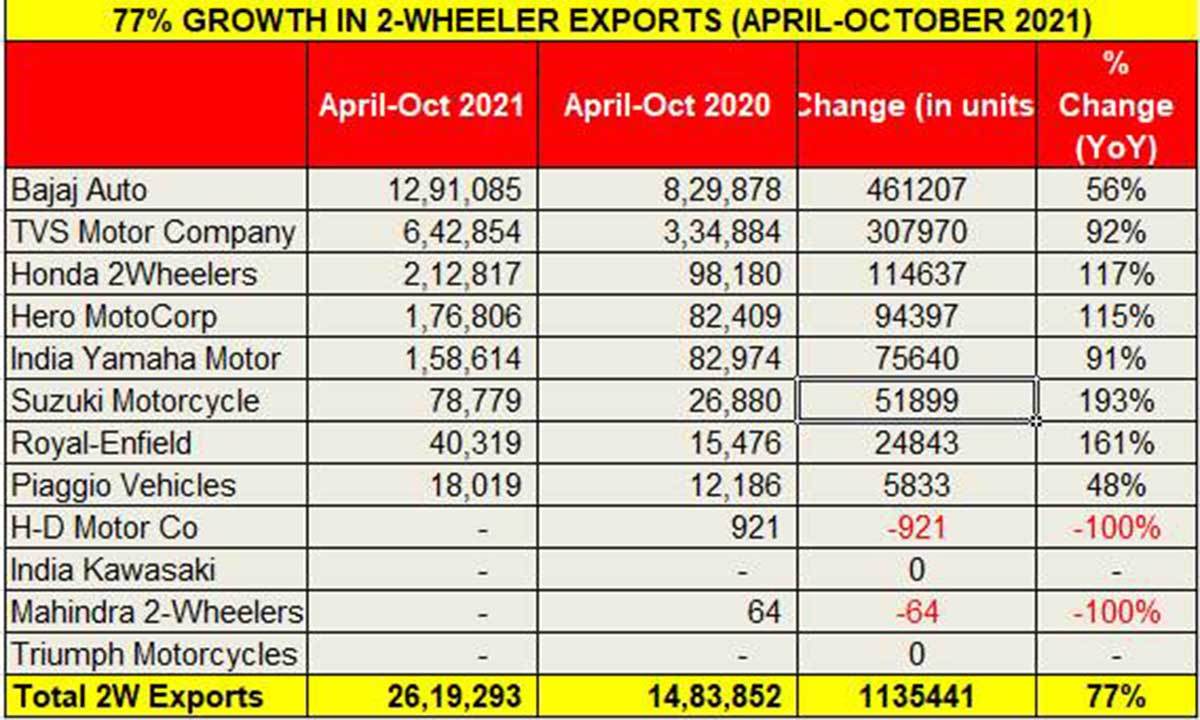 The three-wheeler industry is also making the best of the export demand coming its way. With total shipments of 3,00,708 units in the first seven months of FY2022, growth has been a solid 54 percent year on year.