Of the 11 CNG models on sale in the country, Maruti Suzuki dominates with a market share of 81 percent. 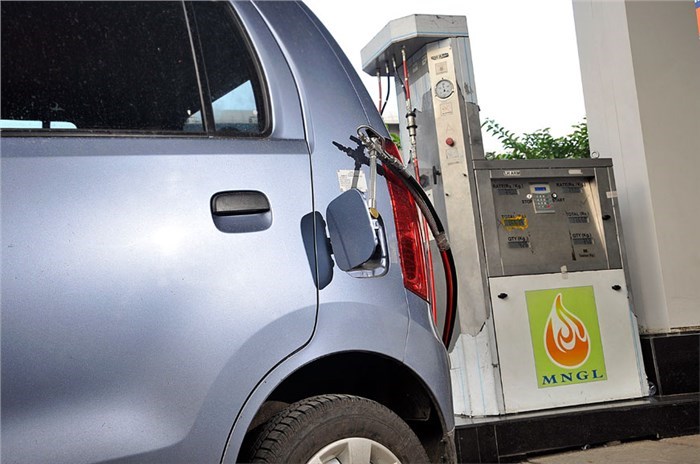 The market is seeing a growing demand for CNG vehicles, even as petrol and diesel retail rates fell on November 4 after the central government cut excise duty by Rs 5 and Rs 10 a litre respectively. In the April-September 2021 period, industry data reveals that a total of 1,01,412 CNG cars were sold in India, which indicates a robust 97 percent year-on-year growth as against 51,448 units in the same period last year.

Running costs are also significantly lower compared to either of the fossil fuels as a vehicle inherently gives better fuel economy when driven on CNG. However, a few challenges remain. Refuelling takes longer due to fewer CNG stations and highway driving requires additional planning in selecting a route. But car buyers, who have heavy day-to-day usage, are finding that CNG makes their wallet happy.

A look at the table above shows that of the 11 CNG models on sale, Maruti Suzuki India sold 82,351, accounting for 81 percent of total sales with its seven models – Alto, S-Presso, Celerio, WagonR, Dzire, Ertiga and Eeco.

The other player, Hyundai Motor India, with four models – Grand i10, Santro, Aura and Xcent – sold the remaining 19,061 units. Not surprisingly, with growing demand for CNG models in a time of sky-high petrol and diesel prices, both carmakers have posted strong YoY growth. While Maruti Suzuki had notched 80 percent YoY growth, Hyundai Motor India has done even better with 238 percent YoY growth – albeit on a lower year-ago base than the overall PV market leader.

All Maruti CNG models other than the Celerio have notched smart YoY growth. The Ertiga, with 21,610 units to its credit has clocked 111 percent growth, while the Eeco registered a 136 percent YoY growth with 13,450 units sold.

Meanwhile, Hyundai Motor India is also seeing strong demand with its Aura CNG sedan selling 9,578 units in the first-half of this financial year, registering a 359 percent YoY growth. The Grand i10 is not very far behind and posted 233 percent growth with 7,102 units sold, even as the Santro (1,890 units) and Xcent (491) saw improved demand.

Tata Motors, which is on a roll in the PV segment with a strong showing each month, doesn’t have a CNG vehicle in its portfolio yet, although its entry is imminent.  In early August, at the launch of the new Tiago NRG hatchback, Mohan Savarkar, vice-president, Product Line Head, PVBU, Tata Motors, had said, “CNG is the way to go for smaller cars. Soon, you will see CNGs coming into our portfolio too. Whether we can use it in all our products or only specific models is something we have to wait and decide when the product hits the market. But, CNG is coming.”

The Tiago CNG and Tigor CNG models have been spotted testing on multiple occasions and, according to our previous report, the two cars are slated to be launched later this year. Also, with fleet operators taking to CNG and electric in a big way, it is likely that a Tata CNG model may debut under the ‘Xpres’ brand.