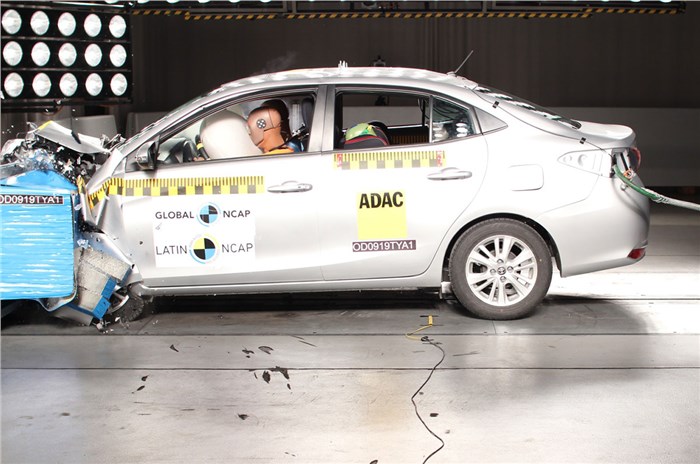 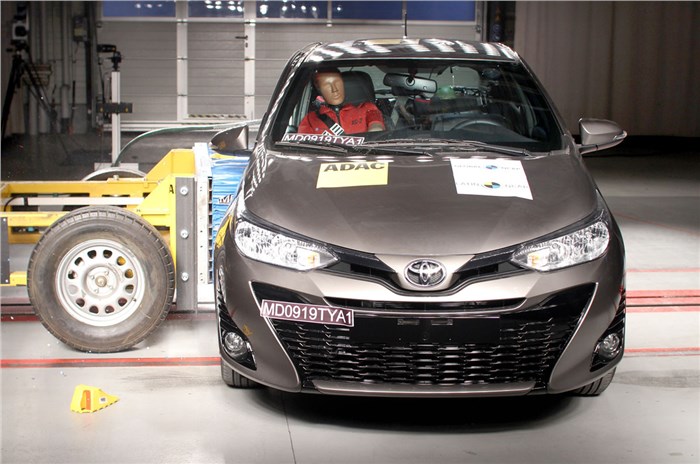 Yaris’ safety rating takes a hit as door opens during side impact testing and seat belt reminder does not detect certain occupants in front passenger seat.

The Latin NCAP conducted fresh crash tests on the Toyota Yaris after having previously tested the model in 2019. The 2021 car was awarded a dismal one star rating – the lowest rating awarded to a car from the manufacturer by the agency.

Not to be confused with the European-spec Yaris, the car for Latin America is essentially the same as the one on sale in India until a few weeks ago, but kitted out for Latin American markets and manufactured in Brazil as well as Thailand.

The safety agency noted that the vehicle’s rescue sheet availability also did not meet its requirements.

When it comes to pedestrian protection, Latin NCAP awarded the car a rating of 61.63 percent, although the manufacturer failed to prove that the car met UN regulations for pedestrian protection. Coming to the safety systems, the Yaris was awarded a 41.86 percent rating as despite the vehicle’s ESC system meeting the requirements, the seat belt reminder failed to recognise certain occupants in the co-driver's seat.

The agency also said that it had audited the Yaris' previous safety rating with adult occupant protection reduced to three stars.

Latin NCAP called for immediate corrective measures for the failed door during side impact testing as it posed a serious risk of an occupant being ejected from the vehicle. The agency also pulled up Toyota Mexico for omitting certain standard safety features in the Yaris, resulting in the poor rating.

“It is concerning that a decision made by Toyota Mexico is the main reason for this result," said Latin NCAP secretary general Alejandro Furas. "Moreover, the decision to not offer as standard key safety equipment. As a result of this, key safety equipment such as side body and side curtain airbags are not available for all Latin Americans.”

Commenting on the results of the Yaris, Stephan Brodziak, Latin NCAP chairman, said, “In previous tests, Toyota had a very good safety performance record. This is inevitably stained when designing with such low safety of one of the most accessible vehicles for consumers that the brand has, due to the risk involved in having a one star vehicle circulating on the streets of our region."

While dual airbags and ESC are standard fit on the car tested, the Yaris could be optioned with side and curtain airbags, a driver knee airbag, autonomous emergency braking and lane and speed assist systems.

Toyota Yaris: discontinued in India due to slow sales

While on sale in other markets, Toyota India pulled the plug on the Yaris in September 2021. Toyota’s midsize sedan came with a notable equipment list, particularly on the safety front. When first introduced, the Yaris came with seven airbags as standard. But a 2019 update added new variants with just three airbags. The Yaris was invariably a slow seller in the segment going up against the Honda City, Maruti Suzuki Ciaz and Hyundai Verna, with the model run ending after about three years. The Yaris is expected to be replaced by a new midsize sedan based on the Maruti Suzuki Ciaz.