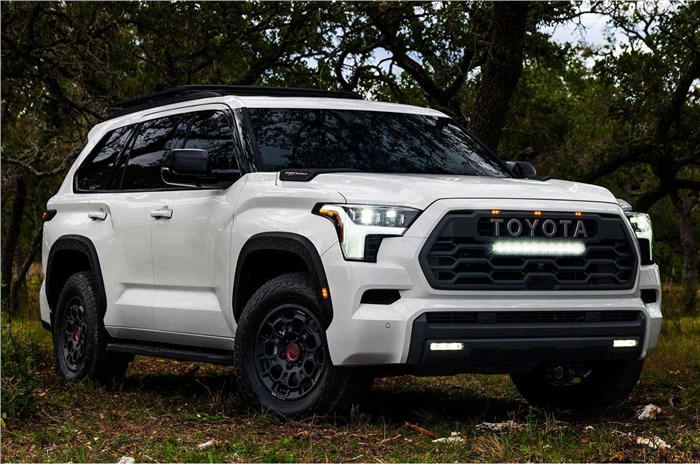 Toyota has released first set of details and pictures of the all-new Sequoia SUV that will go on sale in North America, before going on sale in other markets. The new 2023 Toyota Sequoia enters its third generation, replacing the second-generation of the SUV that made its debut back in 2008.

Toyota Sequoia: what is it?

The new Sequoia shares its underpinnings with the Tundra pickup truck and also some bits with the new Land Cruiser 300 and the Lexus LX600 luxury SUV. The Sequoia is equipped with independent front suspension and multi-link layout at the back. Adaptive dampers and a load-levelling air system for the rear are available as options.

The SUV gets butch styling with upright stance that gives it a tough appearance all throughout. The grille design differs depending on the variant and alters the front look of the SUV. It gets muscular fenders and squarish-wheel arches. The D-pillar has a forward angle with a tapering rear glass.

Some interior bits are also shared with the Tundra. All variants of the SUV get three-row seating, with some variants getting captain’s chairs for the second row.

Under the hood, a single 3.5-litre twin-turbo V6 petrol engine is available. Termed as the i-Force Max, this engine replaces the V8 that was available in the previous-gen Sequoia and churns out 437hp. The only gearbox available is a ten-speed automatic. Customers can select two- or an optional part-time four-wheel-drive system for all trim levels. The TRD Pro package is only available with 4WD.

Toyota also sells a TRD Pro version of the Sequoia that comes with Fox internal bypass shocks and a 0.25-inch front skid plate, a locking rear differenial, Multi-Terrain Select, crawl control and downhill assist control. An LED light bar is part of the front grille and a storage rack is on the roof.

Toyota currently sells the Fortuner and Innova Crysta in the Indian market. The carmaker is also gearing up for the launch of the Hilux pickup truck in March this year. Additionally, Toyota will finally introduce a new midsize Creta-rivaling SUV in India this year which will be jointly developed with Maruti Suzuki. Read more on that here.

What are your first impressions of the all-new Toyota Sequoia? Let us know in the comments below.