Powertrain shared with Fortuner but calibrated differently, with load-lugging and off-road use in mind. 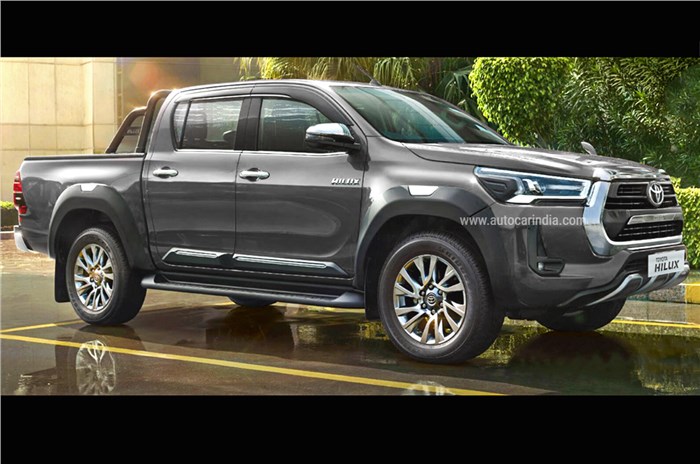 Toyota recently took the covers off the India-spec Hilux and revealed that the pickup truck, which will be launched in March, will be positioned in the lifestyle segment in our market. “We recognised the increasing trend of more consumers aspiring for lifestyle utility vehicles. So, we are launching the Toyota Hilux in the Indian market to cater to those kinds of needs for off-roading and going on adventure drives, in addition to everyday use,” said Jurachart Jongusuk, Toyota regional chief engineer, in an interview with Autocar India.

Hilux to appeal to different set of customers than Toyota Fortuner

Despite being a 4x4, body-on-frame, utility vehicle like the Fortuner, the Hilux has been chosen for an India launch because Toyota believes that the pickup will appeal to a completely different segment – one which it can help grow.

Whilst the mainstream Fortuner is popular amongst large SUV buyers, the Hilux will draw in customers who want to "make a statement", said Jongusuk.

The double-cab Hilux’s main selling point will be its flatbed, which measures 1,555mm x 1,540mm in size and is rated to carry a load of up to 470 kg. According to the Toyota chief engineer, “The deck will provide unmatched flexibility to carry anything – from outdoor gear to a sports kit. So, that is going to be the kind of usage that will differentiate a Hilux customer from the original Fortuner customers.”

Moreover, buyers can accessorise the flatbed of the pickup to make it more versatile. “In markets overseas, people customise it to go for camping or fishing, or to go to the mountains,” Jongusuk said. In similar vein, Toyota has already listed some accessories for the Hilux on its India website. “I do believe that in India, demand for such kind of a lifestyle utility vehicle will go up a lot, and that niche will develop more.”

The Hilux shares its 204hp, 2.8-litre diesel powertrain with the Fortuner. “But the detailed calibration is different between the SUV and the pickup,” highlighted Jongusuk. The Hilux has been developed for load-lugging and off-roadability, in line with its intended usage.

“The use case [of both models] is quite different in terms of carrying things or people and in passing through serious 4x4 conditions. Those are the kind of small details we have looked into.”

The Hilux gets four-wheel drive as standard. There’s an option of a 6-speed manual or a 6-speed automatic transmission, similar to the three-row SUV. However, here too, there are some differences. “We have again calibrated, from scratch, to separately match the usage style of each vehicle. So, not only the engine calibration, but the gearing will also be different,” stated Jongusuk.

He elaborated that the transmission has also been tuned, keeping in mind the local driving habits. For instance, low-end torque has been prioritised to cope with the habit of some Indian drivers to maintain a higher gear even when slowing down. “That is very unique [to India],” said the Toyota engineer.

He added that while fine-tuning the pickup for India, the company also accounted for the country’s hot and humid weather conditions, and then some. “We have already simulated a situation where you are travelling with five people, along with luggage, and are driving up a slope, with the outside temperature at around 45deg Celsius. And we can confirm the actual usage conditions.”

For now, the market for pickups in the country remains small, evident from the volumes of the only other contender in the lifestyle utility vehicle category – the Isuzu D-Max V-Cross. The model sold 898 units in financial year 2020, before it was withdrawn during the shift to BS6 norms. The pickup was reintroduced last May, along with a new D-Max Hilander variant. Till end-2021, both models were able to find 534 takers in the country. In terms of positioning, the D-Max V-Cross is priced at Rs 22.07 lakh-25.60 lakh, with the Highlander coming in at Rs 19.06 lakh (ex-showroom, Delhi).

Given the limited segment volumes, Toyota is taking a cautious approach and will assemble the Hilux at its Karnataka plant with just 30 percent localisation. With a fair amount of imported components, the Hilux will be expensive – as per sources, the Toyota pickup will likely come in at around Rs 34 lakh-38 lakh (estimated, ex-showroom).

At this price, the Hilux may not find too many takers. However, the whole idea of the Hilux is to give buyers an additional option in the segment, and given the spec, Toyota's pickup could be the car with the best 4x4 capability in the country.

What do you think about the Hilux as a lifestyle utility vehicle? Let us know in the comments below.

Waste ,it is of little practical value ,under excellent value for money I would go for a scorpio get away 4 by 4 manual ,it just about provides everything at half the price of toyotas hilux kind rgdd

Well at this price Hilux will have to work very hard to be visible.

Waste ,it is of little practical value ,under excellent value for money I would go for a scorpio get away 4 by 4 manual ,it just about provides everything at half the price of toyotas hilux kind rgdd

Well at this price Hilux will have to work very hard to be visible.