The Glanza will be available in two trim levels; engine options to include a 1.2-litre petrol and 1.2-litre mild-hybrid petrol engines. 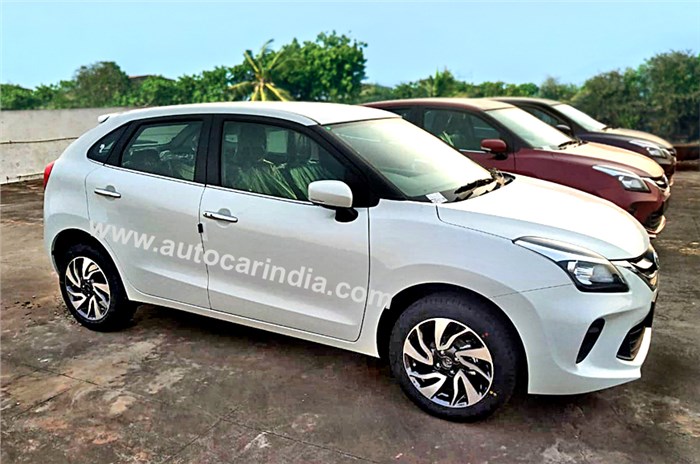 Toyota will launch its first shared product with Maruti Suzuki, the Glanza, this week.  As mentioned in previous reports, the Glanza is being produced by Maruti Suzuki at its Gujarat facility with the manufacturer listing sales of these models under the category ‘Sales to other OEM: A: Compact’ in its monthly sales chart.

As per the latest sales figures, Maruti Suzuki has dispatched a further 2,302 units of the Glanza to Toyota, taking the total number of units dispatched to 2,666 in the last two months. The Glanza has already begun to arrive at Toyota dealerships across the country with dealers in many cities already accepting bookings for the hatchback. Expect deliveries for the hatchback to begin in the weeks following the model’s launch.

As reported by us previously, the Glanza will be available in two trim levels – the G and the top-spec V. The engines on offer include the 90hp, 1.2-litre DualJet mild-hybrid engine and the tried-and-tested 83hp, 1.2-litre petrol unit. Both motors will be paired with a 5-speed manual gearbox as standard with the 83hp motor additionally getting a CVT automatic gearbox option. The DualJet motor though is available only in the G trim. As in the Baleno, both engines will be BS6-compliant.

The Toyota Glanza V MT’s fuel efficiency is rated at 21.01kpl, G MT’s (Smart Hybrid) at 23.87kpl and CVT’s at 19.56kpl. These mileage figures are identical to those of the Maruti Suzuki Baleno.

In terms of equipment, the G and V trims are based on the higher Zeta and Alpha trims of the Baleno; therefore, both come with a fair bit of kit. Standard equipment includes auto climate control, LED projector headlamps, a 7.0-inch touchscreen infotainment system (dubbed Smart Playcast) with Android Auto and Apple CarPlay compatibility (the first Toyota in India to get the connectivity features), 16-inch diamond-cut alloy wheels, driver’s seat height adjust and power adjust and folding wing mirrors. The V variant adds features like auto headlamps, LED DRLs and a rear view camera.

In a bid to make the car more attractive to customers, Toyota will offer a 3-year/1,00,000km warranty package as standard.

When it arrives in showrooms, the Glanza will go up against the likes of the Maruti Baleno, Honda Jazz and Hyundai i20. Given that the Toyota will only be available in two fully loaded trims, expect prices to start at a higher point when compared to its rivals – Glanza prices are expected in the Rs 8-9 lakh bracket (ex-showroom).