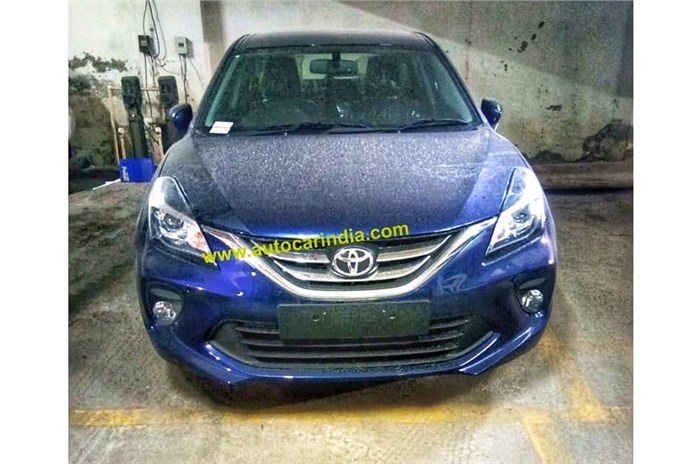 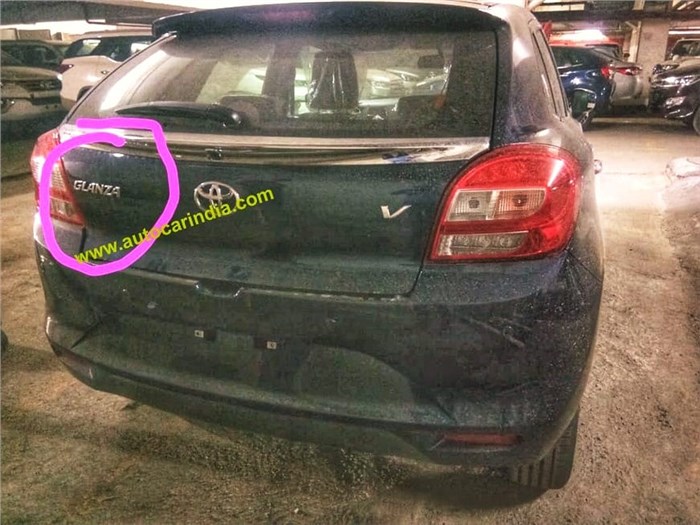 It has been in the news ever since Toyota and Suzuki announced their joint venture, and it was only last week that Toyota shared a teaser of the first product to be born out of this partnership, the Maruti Suzuki Baleno-based Toyota Glanza. Now, we bring you the first Toyota Glanza pictures, which have been leaked ahead of its launch in June 2019.

Unsurprisingly, the exterior changes for the Toyota Glanza are minimal. As expected, the Toyota Glanza gets a different, chrome-embellished grille that lends it more of a Toyota family look, but that aside, it’s exactly the same as the facelifted Maruti Suzuki Baleno.

There are no changes along the side, and the Glanza even wears the same alloy wheels as the Baleno. At the back, the only changes are the addition of the Toyota and Glanza badges, and the variant logo. The model pictured here is the ‘V’ variant, which will likely be the top-spec variant based on the Alpha trim level of the Baleno, and below it will sit a ‘G’ variant based on the Baleno Zeta.

While we can’t yet comment on the Toyota Glanza's interior as there are no images of it, it, too, is likely to remain largely identical to that of the Maruti Suzuki Baleno, with the possible changes likely to be limited to interior colour combinations and small tweaks to the infotainment system.

The key differentiator for the Glanza will be its standard longer warranty. The Glanza is likely to get a three-year/1,00,000km warranty as standard, like what’s offered on other Toyota models in India. The Maruti Suzuki Baleno, in comparison, comes with a standard two-year/40,000km warranty. Toyota is also likely to offer extended warranty plans with the Glanza hatchback, including the five-year True warranty package that can be opted for within the period of standard manufacturing warranty, and the seven-year Toyota Timeless Warranty package, which can be purchased after the standard warranty is over.

The Toyota Glanza's India launch is expected to take place in June 2019. And for those of you who are wondering, the Toyota Glanza's prices will be a little bit higher than the Maruti Suzuki Baleno's, as Toyota will only sell the Glanza in two high-spec variants.

What do you think of the Toyota Glanza's look? Are you happy with the changes? Let us know in the comments.