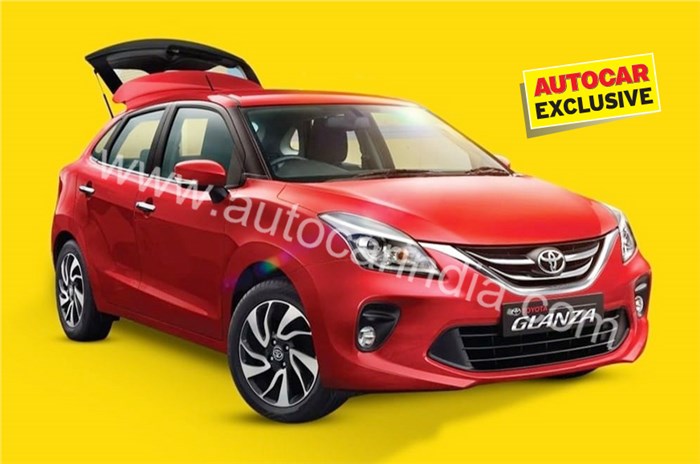 To be available in four versions, the Maruti Suzuki Baleno-based Toyota Glanza will also get the 1.2-litre DualJet petrol engine with a mild-hybrid system; launch on June 6, 2019.

You’ve probably already seen all the Toyota Glanza spy pictures that have been floating around online, and know very well that it is, in essence, nothing more than a rebadged Maruti Suzuki Baleno. Now, ahead of its launch on June 6, 2019, we have got our hands on exclusive details of the Toyota Glanza’s engine options, variants, features, fuel efficiency and expected price.

How many Toyota Glanza variants will be on offer?

On the variants front, Toyota has kept things relatively simple. There will only be two variants of the Toyota Glanza to choose from – G and V. The G trim level is based on the Baleno Zeta, while the V is based on the range-topping Alpha variant. Including all engine-gearbox combinations, there will be four versions of the Toyota Glanza on offer – G, G CVT, V and V CVT.

What are the Toyota Glanza’s engine options?

There will be two BS6-compliant petrol engine options on offer with the Toyota Glanza – the 1.2-litre, K12B making 83hp and 113Nm of torque, and like we’d first reported earlier this month, there will also be the 1.2-litre, K12C DualJet engine with a mild-hybrid system. The DualJet engine is marginally more powerful than the K12B, making 90hp and an identical 113Nm of torque. Paired with K12C motor is the Smart Hybrid system that utilises a lithium-ion battery and provides a torque-assist function that improves acceleration, a start-stop system that switches off the engine at idle to boost fuel efficiency and a brake-energy regeneration function that recharges the battery under deceleration.

What is the Toyota Glanza’s fuel efficiency?

The Toyota Glanza V MT’s fuel efficiency is rated at 21.01kpl, G MT’s (Smart Hybrid) at 23.87kpl and CVT’s at 19.56kpl. These mileage figures are identical to that of the Maruti Suzuki Baleno.

What are the feature differences between the G and V trim levels?

Part of the Toyota Glanza’s features list is auto climate control, a height-adjustable driver’s seat, a 7.0-inch touchscreen infotainment system with Bluetooth connectivity, Android Auto and Apple CarPlay, navigation and voice command functionality, dual airbags, ABS with EBD, rear parking sensors, precision-cut dual-tone alloy wheels, steering-mounted audio controls and push-button start, to name a few. Just like with the Baleno, the differences between the G and V variants of the Glanza are minor. The only features exclusive to the Toyota Glanza V are UV-cut glass, LED DRLs for the headlights and different LED treatment for the tail-lamps, a leather-wrapped steering wheel, auto headlights with follow-me functionality and a reverse camera.

What will the Toyota Glanza’s price range be?

Seeing as it is based on the Maruti Suzuki Baleno, the Toyota Glanza’s price should start at the Rs 8 lakh mark for the entry-level G MT variant, and close out with the V CVT at Rs 9 lakh (estimated, ex-showroom). While that may be around Rs 10,000-14,000 more than equivalent variants of the Baleno, the key differentiator for the Glanza will be its longer standard warranty. The Toyota Glanza will come with a three-year/1,00,000km warranty as standard, like what’s offered on other Toyota models in India. The Baleno, in comparison, comes with a standard two-year/40,000km warranty. As such, the Toyota Glanza’s rivals will include the Hyundai i20, Honda Jazz and the upcoming Tata Altroz.

Think the Toyota Glanza makes a convincing case for itself? Let us know in the comments.