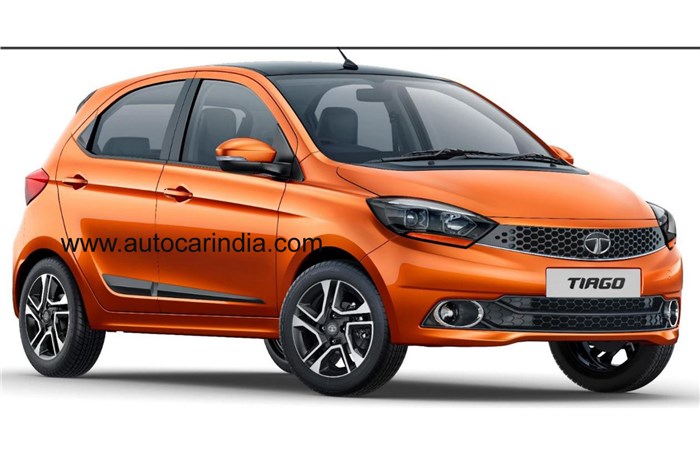 Tata Motors will soon add a new, top-spec variant to its Tiago line-up. A first image of the production-spec Tiago XZ+ has surfaced online, ahead of the model's market launch that's likely to take place soon. The Tiago XZ+ will come with the new Etna orange paint shade that made its debut on the Nexon compact SUV. It will also get a Titanium Grey shade with a contrast roof. A vehicle with this colour combination was spotted recently on the outskirts of Pune, by one of our readers.

Apart from the new paint shade options, the XZ+ gets 15-inch alloy wheels from the Tigor petrol, and the grille and projector headlights are also similar to the Tigor's. On the inside, expect mild updates to the cabin and a larger 7.0-inch touchscreen that made its debut on the Tigor XZ+, replete with Apple CarPlay and Android Auto. The Tiago XZ+ also gets climate control and power-folding wing mirrors.

There are no changes expected under the hood, which means the model will continue to be sold with the 85hp, 1.2-litre petrol and the 70hp, 1.05-litre diesel engine. Both engines are mated to a five-speed manual gearbox, and it remains to be seen whether Tata  will offer an AMT gearbox on the Tiago XZ+.

Expect the Tiago XZ+ to be priced around Rs 5.7 lakh (ex-showroom), which would make it around the same price as the Santro Asta variant that comes with a 69hp, 1.1-litre engine.